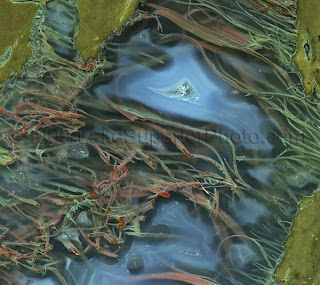 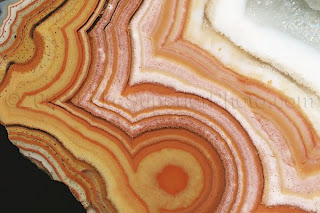 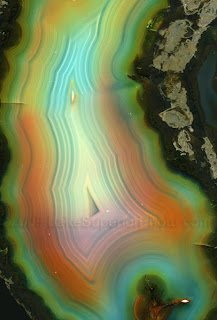 I have spent all day and most of the past few days conducting research on agate genesis. I plan on using the information to update and expand my Understanding Agates Presentation (which I have to present in Holland, MI on April 29th). The research will also be incorporated into the second edition of my agate book, which I hope to publish in 2010. Although I understand a lot more about the factors that influenced agate formation, I still cannot say which of the two main theories I support. My gut feeling is that maybe both of these theories (inflow theory and silica gel theory), and perhap others, are correct. After all, there are 3,000 agates in the world that have formed under a vast array of conditions. Perhaps there is not just one genesis process.

I also met this past week with Shawn Malone, who is a photographer from Marquette. I think we hit it off because we are both "corporate refugees." She speciallizes in landscapes and northern lights photos. Since the northern lights are in a slow period of their cycle, she is looking for other photographic subjects.

I've purchased photos from her before, plus we talked at the Escanaba Art Show last month. We discussed the possibilty of her taking close up pictures of agates and related minerals. Thus, we finally met and I loaned her many of the "Wowser" rocks, as well as some other interesting agate slabs I've been collecting. We are still working out the synergistic relationship, but at the very least I will be selling some of her incredible agate close-up prints. She will also be selling them at the 29 shows she is exhibiting at this year. I hope to have some in time to sell at the Cuyuna Agate and Mineral Show in MN on May 2-3. Below are a few of the preliminary shots. For those of you who have seen the "Wowser" rocks, the first two are the Priday Agate and the Montana Dry Head Agate. The third photo is a close up of an Iris agate. You can learn more about Shawn's work at www.lakesuperiorphoto.com. If you think you may be interested in purchasing an agate close up print, and/or for those of you who are familiar with the Wowser Rocks and you have a request for a particular agate photo, please send me an email to karen@agatelady.com.
Posted by Karen Brzys at 11:25 PM