Last weekend I headed down state for several reasons. First I visited with my college friend, Steve. We played golf on Friday and then went out on his pontoon boat on Horsehead Lake, located east of Big Rapids. We stopped and went a shore at one spot so Steve could show me the interesting cannon. After the boat ride, we enjoyed a nice sunset. 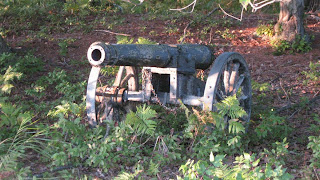 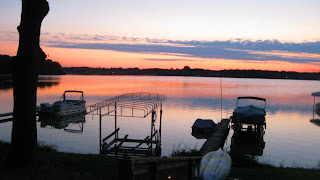 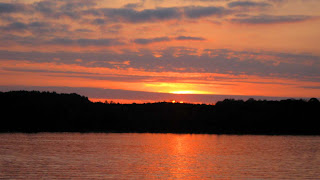 While playing golf, we came across this cool snapping turtle. I didn't want to get too close so the zoom on my camera helped me get a good shot. 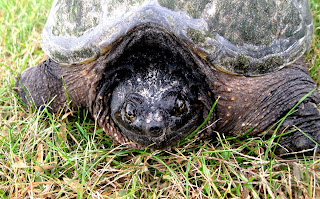 On Saturday, we drove separately down to Ann Arbor to go to the UofM football game. Here is a shot of the "cube" located behind the LSA building. The cube spins on its axes. 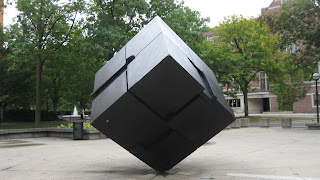 Then we headed over to the game to see the renovated stadium. I must admit that the renovations add a lot, in addition to the new seats. There are now areas to get out of inclement weather.

The UofM football stadium was originally financed by selling 3,000 bonds each costing $500. Those who purchased the bonds were guaranteed the opportunity to purchase season tickets, with seats guaranteed between the 30-yard lines. Fashioned after the Yale Bowl, 440 tons of reinforcing steel and 31,000 square feet of wire mesh went into the building of the 44-section, 72-row, 72,000-seat stadium at a cost of $950,000. The original seats consisted of 22 miles of California Redwood, and the 360 x 160 foot grass playing field included the planting of one four leaf clover.

Despite the grandeur of the new home, many journalists and fans questioned how the new stadium would affect Michigan’s home field advantage after having gone 88-14-2 at Ferry Field.

As the stadium neared completion, an addition of 10,000 temporary seats were added at the top of the stadium. On Oct. 1, 1927, Michigan played Ohio Wesleyan in the first game at Michigan Stadium. The game was a success as Michigan started the scoring on a 28-yard pass from Louis Gilbert to tight end Kip Taylor and prevailed easily, 33-0. The new stadium was dedicated three weeks later against Ohio State on Oct. 22, 1927. Though Michigan spoiled the dedication of Ohio Stadium five years earlier, the Wolverines blanked the Buckeyes 21-0 before a capacity crowd of 84,401 at Michigan Stadium.

Over the decades the capacity of UofM stadium was increased. The latest renovation was completed this year. In 2007 the University's Board of Regents approved a $226 million renovation and expansion project which included a replacement of some bleachers, widening of aisles and individual seats, installing hand rails, and the addition of a new press box, 83 luxury boxes, and 3,200 club seats. The first game in the renovated stadium was played on September 4, 2010 wherein 113,090 attended a game between Michigan and the Connecticut Huskies, setting yet another modern attendance record in college football history.

The first photo below was taken at the first game in 1927. The next photo of "The Big House" was taken in 1998. The final three photos are from this year. Michigan beat the University of Massachusetts 42-37. 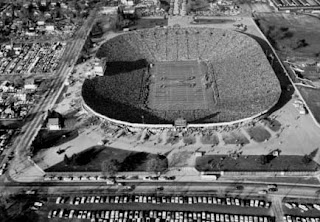 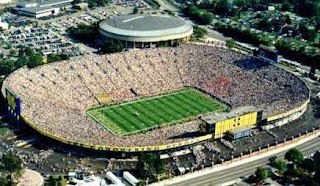 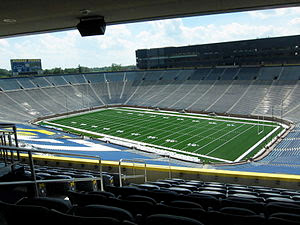 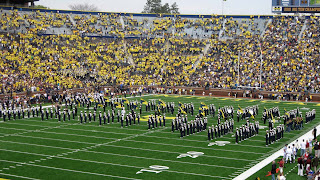