All About Snowy Owls

The other day while hiking in the western side of Grand Sable Dunes, we spotted a large snowy owl sitting on the top of a pine tree. 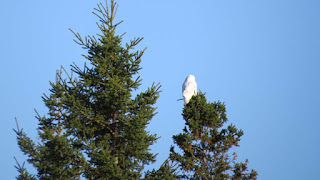 The snowy owl (Bubo scandiacus) is a large, white owl that are native to Arctic regions in North America and Eurasia. Younger snowy owls start with darker plumage, which turns lighter as they get older. Males are almost all white, while females have more flecks of gray plumage. 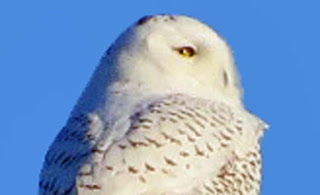 This yellow-eyed, black-beaked white bird is easily recognizable. It is 52–71 cm (20–28 in) long, with a 125–150 cm (49–59 in) wingspan. Also, these owls can weigh anywhere from 1.6 to 3 kg (3.5 to 6.6 lb).  It is one of the largest species of owl and, in North America, is on average the heaviest owl species. Their heavily feathered taloned feet, and coloration render the snowy owl well-adapted for life north of the Arctic Circle. 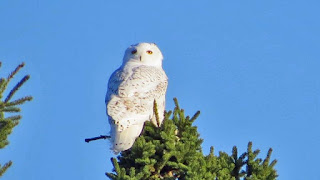 This species of owl nests on the ground, building a scrape on top of a mound or boulder. A site with good visibility is chosen, such as the top of a mound with ready access to hunting areas and a lack of snow. Gravel bars and abandoned eagle nests may be used. The female scrapes a small hollow before laying the eggs. Breeding occurs in May to June, and depending on the amount of prey available, clutch sizes range from 3 to 11 eggs, which are laid singly, approximately every other day over the course of several days. Hatching takes place approximately five weeks after laying, and the pure white young are cared for by both parents. The young hatch asynchronously, with the largest in the brood sometimes 10 to 15 times as heavy as the smallest.  Both the male and the female defend the nest and their young from predators, sometimes by distraction displays. Males may mate with two females which may nest about a kilometer apart.  Some individuals stay on the breeding grounds while others migrate.  Snowy owls nest in the Arctic tundra of the northernmost stretches of Alaska, Canada, and Eurasia. They winter south through Canada and northern Eurasia, with irruptions occurring further south in some years. Snowy owls are attracted to open areas like coastal dunes and prairies that appear somewhat similar to tundra.

In January 2009, a snowy owl appeared in Spring Hill, Tennessee, the first reported sighting in the state since 1987.  Also notable is the mass southern migration in the winter of 2011/2012, when thousands of snowy owls were spotted in various locations across the United States. This was then followed by an even larger mass southern migration in 2013/2014 with the first snowy owls seen in Florida for decades.  Since two snowy owls were seen by a friend east of Grand Marais, they definitely have migrated to the south shore of Lake Superior.

This powerful bird relies primarily on lemmings and other small rodents for food during the breeding season. They feed on a wide variety of small mammals such as meadow voles and deer mice, but will take advantage of larger prey, frequently following traplines to find food. Some of the larger mammal prey includes hares, muskrats, marmots, squirrels, rabbits, raccoons, prairie dogs, rats, moles ducks, geese, shorebirds, pheasants, grouse, coots, grebes, gulls, songbirds, and even other raptors, including other owl species. Most of the owls' hunting is done in the "sit and wait" style; prey may be captured on the ground or in the air, or fish may be snatched off the surface of bodies of water using their sharp talons. Each bird must capture roughly 7 to 12 mice per day to meet its food requirement and can eat more than 1,600 lemmings per year. Unlike most owls that hunt at night, snowy owls are diurnal and hunt during the day and night.