Yesterday afternoon I skied early afternoon.  The national park's trails had not been groomed in a couple of days, but we skied anyway.  Then, in the afternoon while I was meeting with one of my book reviewers, I spotted a grouse in one of my apple trees.

Grouse are heavily built birds, similar to chickens. They range in length from 12 to 37 inches, and in weight from 0.66 to 14.33 pounds. Males are bigger than females—twice as heavy. Grouse have feathered nostrils and legs. In winter the toes are feathered, too to allow them to walk and burrow in the snow. 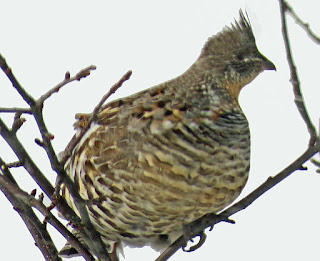 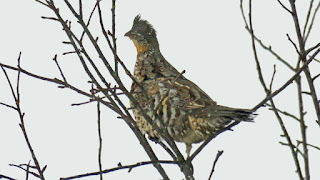 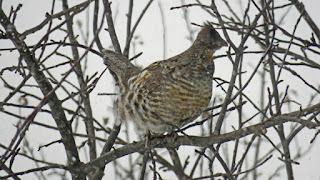 Grouse make up a considerable part of the vertebrate biomass in the Arctic and Subarctic. Their numbers may fall sharply in years of bad weather or high predator populations—significant grouse populations are a major food source for lynx, foxes, martens, and birds of prey. However, because of their large clutches (5-12 eggs), they can recover quickly.