After Jill and i went to the Tiger-Twin one game play off game, we drove back up to our motel room in Carlton County. That gave us an opportunity to agate hunt one last time. It was VERY muddy, but when the sun popped out, it gave us the opportunity to test the "glowing" translucency theory. Although we could not see the banding of agates, due to the mud, we were able to see them glowing and speaking to us "here I am -- I am an agate!" Here is a photo of us muddy agate hunters. 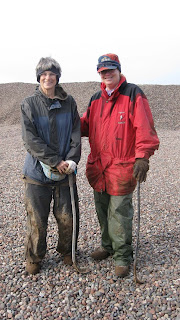 One of our friends in Minnesota is leasing storage space for the new pipeline that is being put in. In August, the US State Department issued permits for the multi-billion dollar project to Embridge Energy. They are building a 1,000 mile pipeline, called the Alberta Clipper, that will run from Hardistry, Alberta, to Superior, Wisconsin. The pipeline will carry crude oil extracted from he oil sands of Alberta. It is expected to carry 1.8 billion barrels a day starting in 2015. Considering that the permit was just issued in August, a lot of work has already been done on the pipeline. 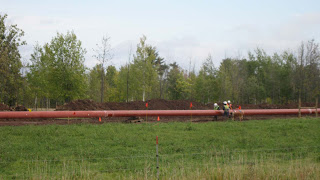 Through out the trip, we enjoyed the fall colors. The second photo below was taken on the hill going into Ishpeming. You can see the mine hoists. 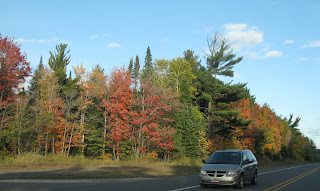 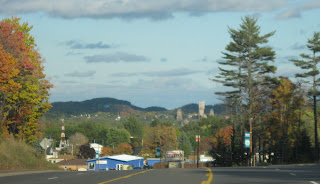