First of all, I have to say that I have been so busy since arriving down state spending time with my grandson that I have not made time to post a blog update.  Today, I am finally making the time.  First a couple of photos.... 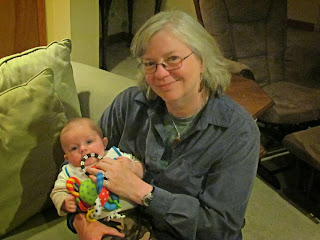 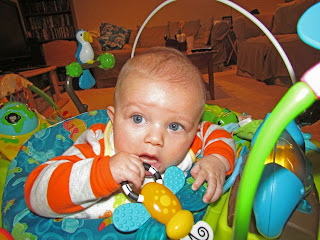 But for this posting, I decided to check on what new images are being generated from the Cassini Space mission that is investigating Saturn.   The following portrait looking down on Saturn and its rings was created from images obtained by NASA's Cassini spacecraft on Oct. 10, 2013. It was made by amateur image processor and Cassini fan Gordan Ugarkovic.  This montage is amazing and doesn't even look real. 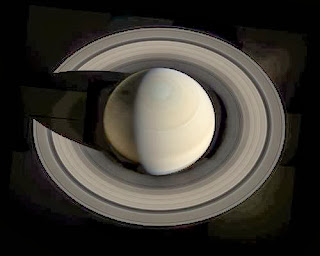 In the photo below, the shadow of Saturn cuts across the rings in this recent Cassini spacecraft image. As the ring particles enter Saturn's shadow, their temperature drops to even colder temperatures, only to warm back up again when they re-emerge into the sunlight. Ring scientists think that these temperature swings may help change the physical properties of the ring particles.
Eight stars are visible in this image, including one through the rings. This view looks toward the unilluminated side of the rings from about 56 degrees below the ringplane. The image was taken in visible violet light with the Cassini spacecraft narrow-angle camera on May 29, 2013.  The view was acquired at a distance of approximately 639,000 miles (1.0 million kilometers) from Saturn . Image scale is 4 miles (6 kilometers) per pixel. 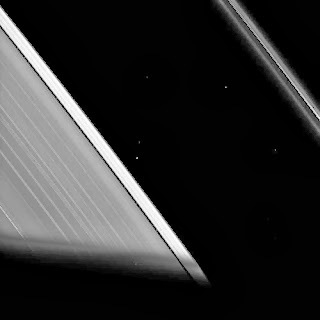 The photo below shows one of Saturn's moons, Enceladus, and its unusual plume.  The only way that the Cassini team can capture this image is when the spacecraft and the Sun are on opposite sides of Enceladus. So what's lighting up the moon then? It's light reflected off Saturn. This lighting trick allows the Cassini spacecraft to capture both the back-lit plume and the surface of Enceladus in one shot.
The view was acquired at a distance of approximately 517,000 miles (832,000 kilometers) from Enceladus . Image scale is 3 miles (5 kilometers) per pixel. 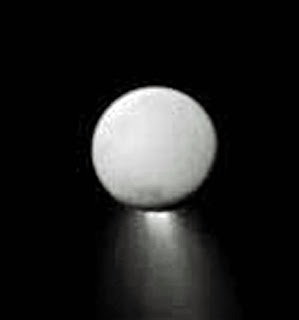 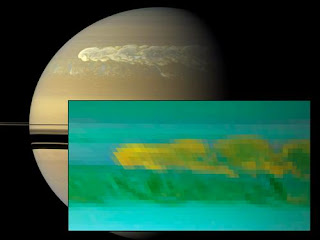