Unusual and Intersting Pictures of Earth

For today's blog posting, I decided to search through NASA archives and look for unusual and interesting photos of Earth. 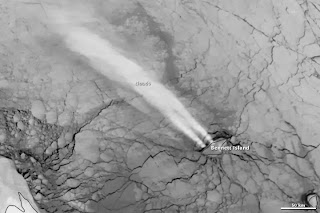 Check out the above image.  When the cold war was still impacting world politics during the 1970s and 1980s, atmospheric scientists reviewing satellite images noticed an unusual phenomenon in the East Siberian Sea. Every few weeks, high clouds would stream away from a tiny island in Russian Arctic. The short-lived clouds not only stretched for hundreds of kilometers, they stretched away from just one side of Bennett Island.

For 20 years, these clouds were a puzzle. Scientists were not sure whether the clouds formed from methane gas bubbling up from the sea floor, from a military weapons testing program, or from some other natural phenomenon.

Finally in 1992 the mystery was solved when a joint Russian-American research team determined that the clouds form when air flows over the tiny island is just right, sending moist air up to higher-than-usual altitudes.  The island rises 1,400 feet above sea level which is just enough in the otherwise flat and icy Arctic Ocean to cause moist air flowing from the southeast to ramp up into the atmosphere and condense into cloud-forming ice crystals about 10,000 fee) above the earth's surface. 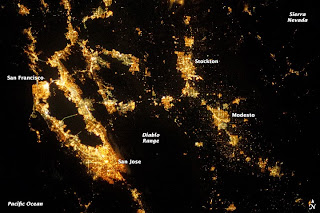 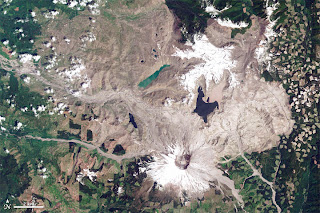 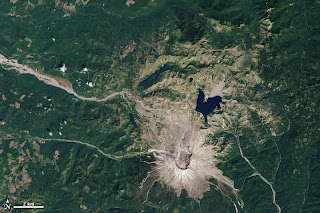 The two images above show how Mount St. Helens area changed over time.  On May 18, 1980, a volcanic eruption obliterated the landscape around the once seemingly pristine mountain. Entire forests were mowed down by the blast wave. The land surface was sterilized by heat and noxious gas, and then buried under tens of meters of ash, mud, and rock. Nearly every living creature perished within a few miles of the collapsed mountain.  But some traces of life survived beneath the debris. Seeds, spores, gophers, fungi. Other flora and fauna survived just beyond the edge of the blighted landscape and eventually spread back into the entire region.

The eruption of Mount St. Helens in Washington blew down or burned up 600 square kilometers (230 square miles) of forest, laying waste to parcels as far as 27 kilometers (17 miles) from the summit. About 4.7 billion board-feet of timber were lost.  In addition to natural recovery, the Forest Service has helped by planting nearly 10 million trees on 14,000 acres.  The elk, the fish, and the tourists have come back, too. 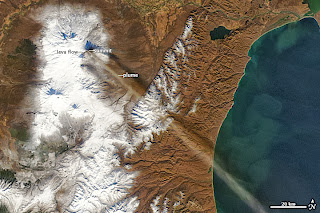 The image above shows Russia’s Klyuchevskaya Volcano propelling a plume of ash into clear skies in the autumn of 2013. In addition to the ash plume, an active lava flow spilled from the summit down the volcano’s southwestern flank. In the afternoon image (lower), long shadows reveal the structure of the plume. The ash barely rises above Klyuchevskaya’s 4,750-meter (15,580-foot) summit before being carried southeast by the wind. 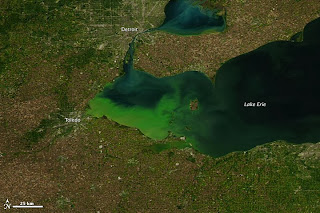 In the photo above, the waters of Lake Erie seem to glow green in this image taken on September 26, 2013. The color comes from an algae bloom that has been growing in the lake since July. The bloom is microcystis, a form of blue-green algae that produce liver toxins, causing numbness, nausea, vomiting, and (rarely) liver failure.  This freshwater algae forms when waters are warm. In Lake Erie, runoff from farms and lawns provides extra nitrogen, phosphorous, and other nutrients that allow the algae to flourish. The current bloom is smaller than the record-setting bloom of 2011, but concentrations have been at risky levels at many points throughout the summer. 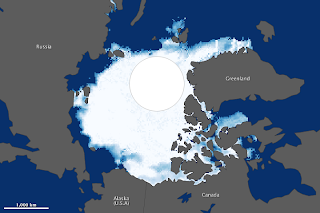 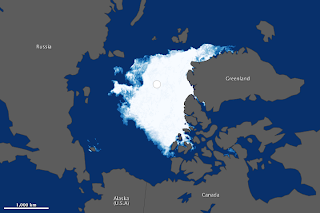 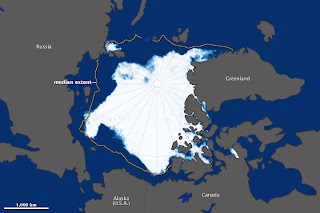 The above three photos show the significant decline of sea ice in the Arctic Ocean.  grows through the winter each year and melts through the summer, typically reaching its minimum extent sometime in September. The extent can vary considerably from year to year, sometimes above the long-term average and sometimes below. Extent is defined as the total area in which the ice concentration is at least 15 percent.  Once sea ice begins to melt, it becomes a self-reinforcing process. Because there is less ice to reflect sunlight back into space, more energy is absorbed by the darker ocean water. As sea ice extents drop, less ice survives from year to year. Ice that has formed since the last melt season—“known as first-year ice”—is thinner and more prone to melting than thicker multi-year ice. In the past decade, first-year ice has come to dominate the Arctic Ocean.

In August and September 2012, sea ice covered less of the Arctic Ocean than at any other time since at least 1979, when the first reliable satellite measurements began. The average minimum extent for 1979–2000 was 6.70 million square kilometers (2.59 million square miles). The 1984 minimum was roughly that amount, so a comparison between 2012 and 1984 gives an idea of how much conditions this year strayed from the long-term average. The minimum ice extent in 2012 was about half the average.  Though less Arctic sea ice melted in 2013 compared to 2012, this year’s total is the sixth lowest in the satellite record. This year continues a long-term downward trend of about 12 percent Arctic sea ice loss per decade since the late 1970s—a decline that accelerated after 2007.

The chart below shows the long term trend. 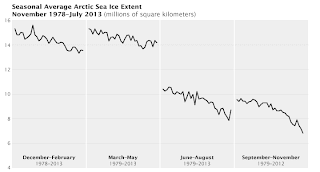