All about the Comet ISON 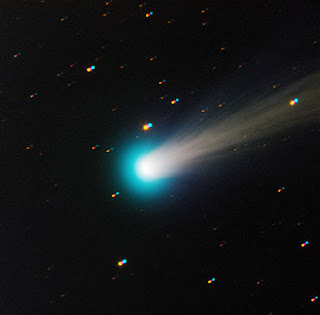 Scientists believe that this is the first time that this particular comet has visited the inner reaches of our solar system.  By measuring the trajectory of the comet, researchers determined that the comet has taken over five million years to reach the Sun, or at least get close to it, from the Oort cloud. 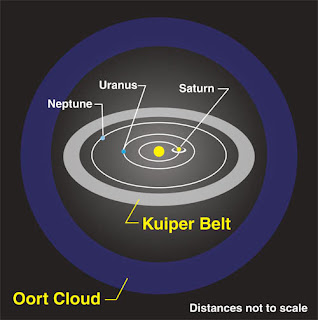 The comet ISON, named after the International Scientific Optical Network which discovered it last year, made its closest approach to the sun Thursday at 1:37 p.m. ET.  The comet passed only 724,000 miles (1,165,000 km) from the surface of the sun. 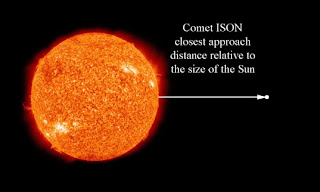 If the comet is still visible, beginning in early December look low in the sky early in the morning if you live in the northern hemisphere.  Each day it will go higher in the sky and be visible earlier in the morning, closer to midnight. By December 17th it will be up or around the Big Dipper and should be visible closer to midnight.  The map below shows the zones of visibility for seeing the comet.  More charts are included at the end of this post. 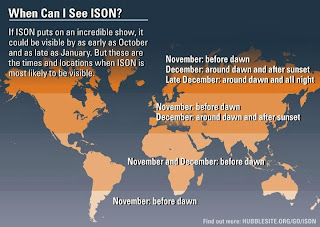 As Comet ISON headed toward its closest approach to the sun — known as perihelion — on Nov. 28, 2013, scientists watched to see if the comet had already broken up under the intense heat and gravitational forces of the sun. The comet was too far away to discern exactly what was going on, so instead researchers carefully measured how bright it was. Less light can sometimes mean that more of the material boiled off and disappeared, perhaps pointing to a disintegrated comet.   A compilation of comet ISON pictures below show how it became brighter as it moved toward the sun.  Another comet can also be seen in the image moving to the bottom right corner of the video.

ISON went around the sun on Nov. 28, 2013. Several solar observatories watched the comet throughout this closest approach to the sun, known as perihelion. At first scientists thought that the comet did not survive the trip around the sun.  Continuing a history of surprising behavior, material from Comet ISON surprisingly appeared on the other side of the sun on the evening on Nov. 28th, 2013, despite not having been seen in observations during its closest approach to the sun.

A streak of bright material streaming away from the sun appeared later in the evening. The question remains whether it is merely debris from the comet, or if some portion of the comet's nucleus survived, but late-night analysis from scientists with NASA's Comet ISON Observing Campaign suggest that there is at least a small nucleus intact. 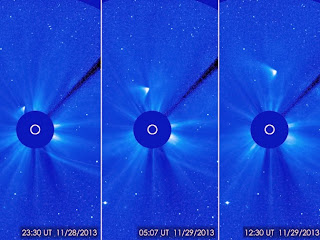 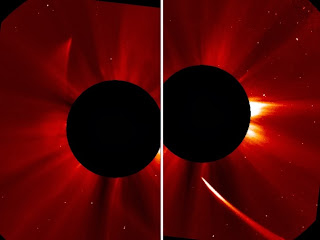 Throughout the year that researchers have watched Comet ISON – and especially during its final approach to the sun – the comet brightened and dimmed in unexpected ways.  Such brightness changes usually occur in response to material boiling off the comet, and different material will do so at different temperatures thus providing clues as to what the comet is made of.  Analyzing this pattern will help scientists understand the composition of ISON, which contains material assembled during the very formation of the solar system some 4.5 billion years ago.

Here is another video of comet ISON.

Some charts from the web page http://waitingforison.wordpress.com/december-2013/ shows where to look for ISON in December.  Scientists are still trying to figure out just how bright ISON will be as it continues around the sun.  But we know where it will BE – in the east, before dawn. On Dec 1st it will lie to the left of the very thin crescent Moon as well as Mars and Mercury(size exaggerated on this next picture to show where it is). 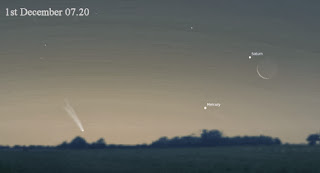 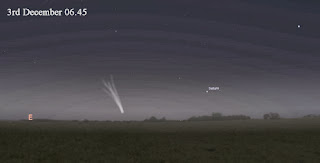 Dec 5th: earlier that morning ISON will be easier to see, standing above the eastern horizon with its tail – if it has one – pointing almost straight up.

Dec 5th: By now it should be worth looking for Comet ISON in the western sky after sunset, too. On the 5th it will lie to the right of the lovely crescent Moon and brilliant Venus. It might still be hard to see against the bright twilight sky.