Last night I tried to go for a little walk, but it was more than my injured knee can take.  I spoke with one of my friends who is a knee expert.  It appears that I did injure the MCL, but we don't think I completely tore it.  Thus, I have to give the knee a couple of weeks to heal before I start hiking, which I will do with a knee brace.

So for today's blog posting I decided to search the NASA website http://earthobservatory.nasa.gov/ and look for photos from space of Lake Superior.  The photos and information below are from this webpage. 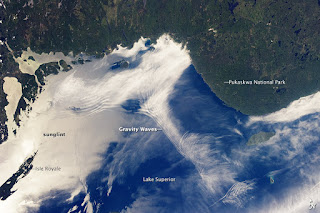 From the vantage point of the International Space Station, astronauts frequently observe atmospheric and surface phenomena in ways that are impossible to view from the ground. Two such phenomena—gravity waves and sunglint—are illustrated in this photograph of northeastern Lake Superior.

At the top of the image, the Canadian Shield of southern Ontario is covered by an extensive forest canopy typical of early summer. Offshore and to the west and southwest of Pukaskwa National Park, several distinct sets of parallel cloud bands are visible. Gravity waves are produced when moisture-laden air encounters imbalances in air density, such as might be expected when cool air flows over warmer air. This can cause the flowing air to oscillate up and down as it moves, causing clouds to condense as the air rises and cools and to evaporate away as the air sinks and warms. This produces parallel bands of clouds oriented perpendicular to the wind direction. The orientation of the cloud bands in this image, parallel to the coastlines, suggests that air flowing off of the land surfaces to the north is interacting with moist, stable air over the lake surface, creating gravity waves.

The second phenomenon—sun glint—affects the water surface around and to the northeast of Isle Royale. Sun glint is caused by light reflection off a water surface; some of the reflected light travels directly back towards the observer, resulting in a bright mirror-like appearance over large expanses of water. Water currents and changes in surface tension—typically caused by presence of oils or surfactants—alter the reflective properties of the water and can be highlighted by sun glint. For example, surface water currents are visible to the east of Isle Royale that are oriented similarly to the gravity waves, suggesting that they too are the product of winds moving off of the land surface.

Another weather phenomena is shown in the two photos below: 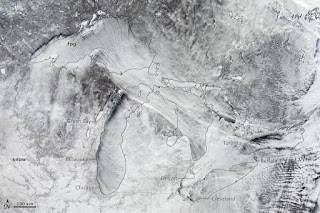 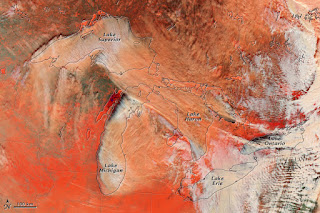 A swirling mass of Arctic air moved south into the continental United States in early January 2014. On January 3, the air mass began breaking off from the polar vortex, a semi-permanent low-pressure system with a center around Canada’s Baffin Island. The frigid air was pushed south into the Great Lakes region by the jet stream, bringing abnormally cold temperatures to many parts of Canada and the central and eastern United States.

When the cold air passed over the relatively warm waters of Lake Michigan and Lake Superior, the contrast in temperatures created a visual spectacle. As cold, dry air moved over the lakes, it mixed with warmer, moister air rising off the lake surfaces, transforming the water vapor into fog—a phenomenon known as steam fog.

It is December and we have zero snow.  The photo below shows what we are waiting for: 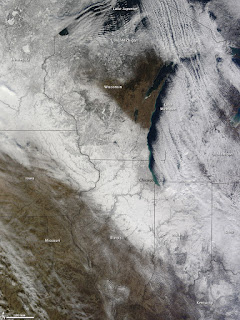 The photo above shows a swath of white that defines the path of the storm from Minnesota to Kentucky. Cloud streets streak across Lake Superior and Lake Michigan. Such clouds form when cold, dry air blows over the lakes. The moist air from the lakes freezes, forming long lines of clouds that echo the flow of the wind. The same process creates lake-effect snow, which was reported south and east of the lakes. The snow in northern Wisconsin and Michigan is likely lake effect snow off Lake Superior.

It is not often that the Great Lakes can be seen from space with no clouds: 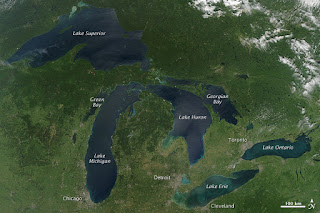