Yesterday it was raining with temperatures in the low to mid 30s -- my least favorite weather to go hiking.  So I stayed home and made mineral art for the show this weekend in Marquette at the Superior Dome.  This is my last show of the year, so I am looking forward to project time after that.  Next week I will resume work on the Grand Marais history book.

So for today's posting I visited NASA's website http://earthobservatory.nasa.gov/. 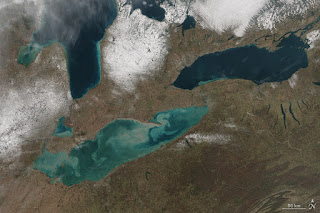 November can be a stormy month in the Great Lakes region, as it was again in 2015. Toward the middle of the month, a low-pressure system and cold front swept up from the Central Plains and across the lakes. Wind gusts as high as 52 miles (84 kilometers) per hour on Lake Erie halted shipping.

Winds were not the only reason ships sought safe anchorage. The high winds created a seiche—a large standing wave that occurs when strong winds and a quick change in atmospheric pressure push water from one end of a body of water to the other.  Seiches occur periodically on Lake Erie. In 1844, a 22-foot seiche breached a sea wall with deadly consequences. In 2008, Buffalo was flooded by waves that measured 16 feet. That’s about the height of the seiche measured by a buoy at the lake’s east side on November 12, 2015.

Two weeks after the seiche, its effects were still evident. On November 25, 2015, a satellite acquired the above natural-color image of colorful green and tan swirls. The seiche stirred up a lot of sediment, shown as swirls of color in the photograph.  The image also shows that the phenomenon is not limited to Lake Erie. The same thing is happening in Saginaw Bay, located on the southwest side of Lake Huron. High-sediment water also appears to be entering Lake Ontario from Lake Erie via the Niagara River. 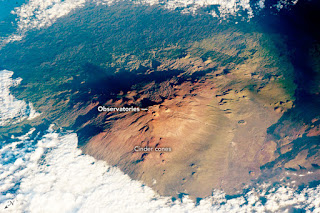 Mauna Kea (“White Mountain”) is the only volcano on the island of Hawaii that has evidence of glaciation. This photograph of Mauna Kea was taken by an astronaut as the International Space Station (ISS). The late-afternoon lighting and oblique viewing angle accentuates the shadows, highlighting the white domes of the observatories along the crater rims. The angle also accentuates the numerous cinder cones and lava flows.

Several observatories appear as small white dots on the rim of Mauna Kea. As the highest volcano on the island of Hawaii (summit elevation 4,205 meters or 13,800 feet above sea level), it is an ideal location for the astronomical observatories set up by several countries and academic consortiums.  Pictures I took while at the top of Mauna Kea are below.

Once we drove above the clouds at around 6,500 feet -- we saw Mauna Kea for the first time. 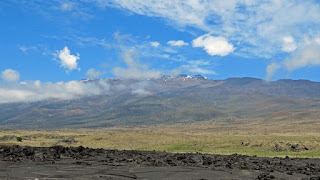 A view from the top shows the clouds in the distance, well below the summit. 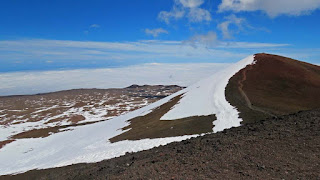 Some of the observatories.... 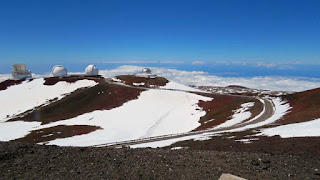 Some of the cinder cones.... 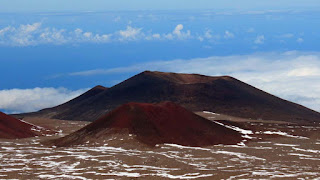 Although Mauna Kea last erupted in 2460 BCE, the potential for renewed activity is high. Neighboring Mauna Loa volcano has erupted approximately every six years for the past 3,000 years.

FIRST MID-WEST SNOWFALL OF THE YEAR 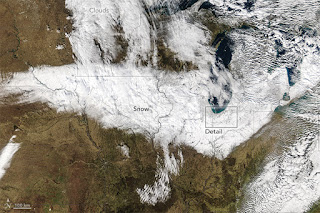 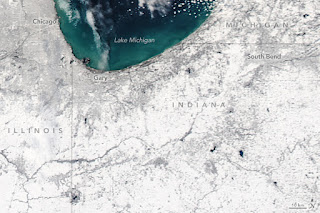 Much of the Midwestern United States was drier and significantly warmer than normal in October and November 2015. So when snow blanketed the region from South Dakota to Ohio on November 20–21, it probably gave some people weather whiplash. For an area that is quite familiar with snow, it was still a storm for the history books, with a few records set for the highest snowfall totals for a first snow of the year.

At Chicago’s O’Hare International Airport, 11.2 inches (28.4 cm) of snowfall were recorded by the time the storm moved out on November 21. It was the second highest November snowfall since records were started in 1884 and the highest total for the first snow of the season. A new record for first snowfall also was set in Rockford, Illinois (8.8 inches or 22.4 cm). Nearly 800 flights into and out of Chicago were canceled by the snow.

The long-term average November snowfall for Chicago is 1.4 inches, and the average date of the first snow is December 7, according to The Weather Channel. Last winter, Chicago did not accumulate 6 inches of snow until January 5, 2015.