Geology of the middle section of the U.P. and more

First I have a few photos still to post from my Mackinac Island trip. The view from my friend Lee's house is spectacular. There are a few trees which make the view a little more mysterious. We enjoyed sitting on his porch and watching the boats travelling between St. Ignace and the island, as well as cars going over the Mackinac Bridge. Lee has the best view on the island of sunsets. Because of the angle of his property, he can see sunsets all year long. 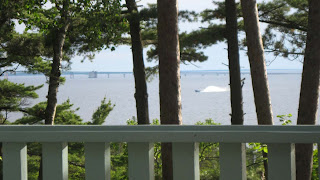 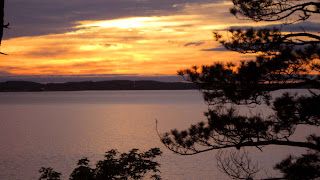 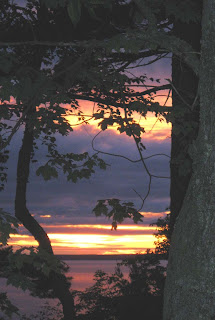 When I drove over to St. Ignace I took M 28 to M123 and went through Trout Lake. I had noticed before when driving through the area that there are dune formations as well as dolomite and limestone formations. Both dolomite and limestone are sedimentary rock. Dolomite is the name of a sedimentary carbonate rock and a mineral, both composed of calcium magnesium carbonate. Dolomite rock (also dolostone) is composed predominantly of the mineral dolomite. Limestone that is partially replaced by dolomite is referred to as dolomitic limestone. Dolomite was first described in 1791 as the rock by the French naturalist and geologist, Déodat Gratet de Dolomieu (1750–1801) for exposures in the Dolomite Alps of northern Italy.

The mineral dolomite crystallizes in the trigonal-rhombohedral system. It forms white, gray to pink, commonly curved crystals, although it is usually massive. It has physical properties similar to those of the mineral calcite, but does not rapidly dissolve or effervesce (fizz) in dilute hydrochloric acid unless it is scratched or in powdered form. It is relatively soft with a Mohs hardness of 3.5 to 4.

Dolomite is a common sedimentary rock-forming mineral that can be found in massive beds several hundred feet thick. They are found all over the world and are quite common in sedimentary rock sequences. Disputes have arisen as to how these dolomite beds formed and the debate has been called the "Dolomite Problem". Dolomite at present time, does not form on the surface of the earth; yet massive layers of dolomite can be found in ancient rocks. That is quite a problem for sedimentologists who see sandstones, shales and limestones formed today almost before their eyes. Why no dolomite? Well there are no good simple answers, but it appears that dolomite rock is one of the few sedimentary rocks that undergoes a significant mineralogical change after it is deposited. They are originally deposited as calcite/aragonite rich limestones, but during a process call diagenesis the calcite and/or aragonite is altered to dolomite. The process is not metamorphism, but something just short of that. Magnesium rich ground waters that have a significant amount of salinity are probably crucial and warm, tropical near ocean environments are probably the best source of dolomite formation.

Both the dolomite and sand dunes in the middle section of the U.P. southeast of Newberry and northwest of St. Ignace are proof that ancient oceans at one time were in the area. Many of the dolomite outcroppings are near the Fred Dye Nature Sanctuary on M123. 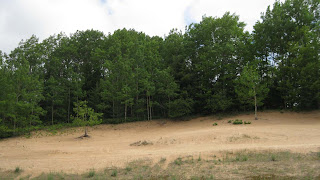 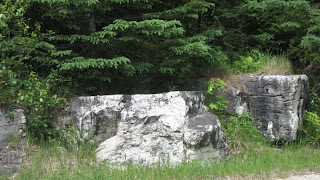 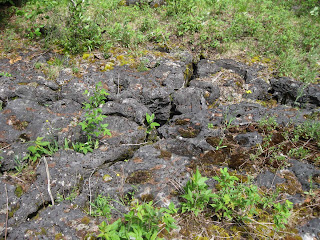 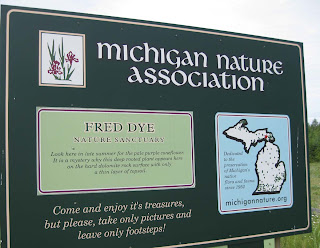