Continuing the blog tour of the Quincy Mine, this posting finishes the steam hoist building and then proceeds to the copper mine. The steam hoist, which was installed in the early 1900s, was the pride and joy of the Quincy Mine. It looks like a grooved bee hive, sitting on its side. Pictured below is a photo of part of the hoist as well as one of the two steam generators. Steam power was used to turn the hoist, which wound and unwound the cable that transported cars into and out of the mine. Two cars were moved in tandem. They either hauled ore cars, worker transport cars, or water cars. The ore cars were hauled at more than 35 mph. When they were moving the workers, they slowed the transport to 15 mph. The miners harvested ore 6 days a week, 24 hours a day. On Sundays, a skeleton crew worked to transport the water cars to remove water from the mine and prevent it from flooding. 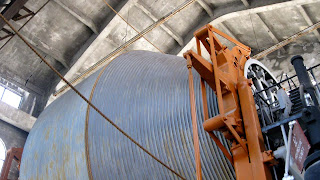 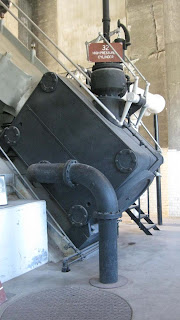 Safety was always the first priority. The Qunicy Mine not only had a telephone system to allow the miners to communicate with the hoist operator, but an essential backup system was installed with lights. Since the miners included people from all over the world who spoke many different languages, the telephone system was not always effective. The other system used red lights that could be turned one and off in a series of codes to facilitate communication and make sure that the hoist operator knew when to move and stop the hoist. 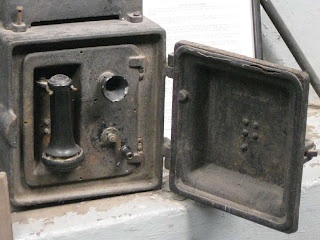 After exiting the hoist building, we were escorted to the tram that transported us to the mine's entrance. The tram travelled by rail toward Houghton and down the hill. The view of the bridge across the portage connecting Houghton to Hancock was spectacular. 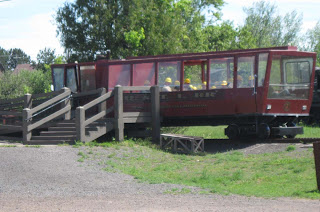 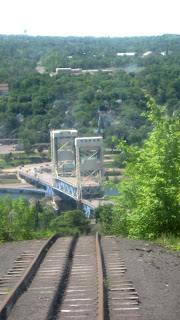 Then we had a seat on the carriage that was hooked to a tractor. The tractor accessed the mine and travelled mostly horizontally into the mine. We travelled more than 2,000 feet on the seventh level. As already reported, levels 8 through 92 are now flooded. 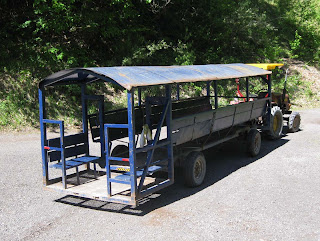 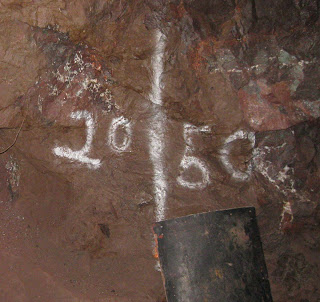 Instead of timbers to support the mine's ceiling, there are straps. The spikes holding the ceiling straps are driven up to six feet into the bedrock. 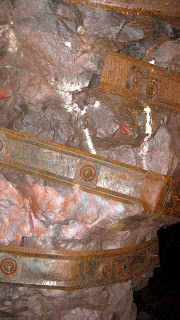 From what the tour guide explained, it was more cost effective to mine the rock that contained only two percent copper, as compared to the heavy solid chunks of copper which were difficult if not impossible to remove from the mine. Pictured below is the tour guide with one of the copper chunks. 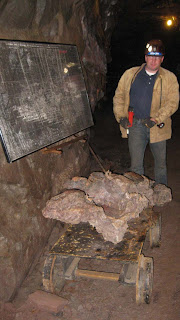 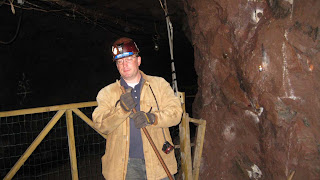 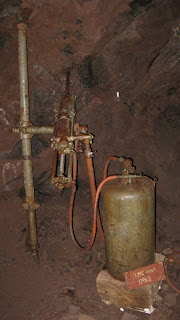 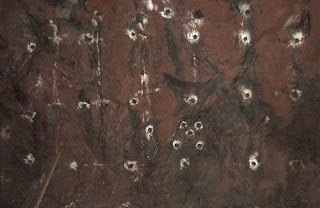 Trammers then loaded the ore onto ore cars. 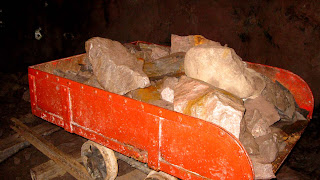 When we reassembled onto the carriage, you could see the mine's exit from almost a half mile away. 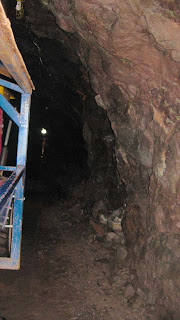