I didn't get a chance to go out hiking yesterday so for today's blog posting I decided to research Lake Superior's weather and temperature trends. I was talking with a friend yesterday and we realized that we have not yet had any snow. In other years I have cross country skied in October, and certainly in early November. Instead this year the temperatures have been in the 40s and 50s with no snow in sight. We barely have even had any frost.

The average amount of snow for Marquette over the last 65 years is:

Here are some charts showing weather trends for Marquette.  First a chart showing average snowfall per month.  Notice how high Marquette is (dark green line) compared to the national average (shaded light green).  For Grand Marais, the total snowfall figures would be a bit higher. We probably average around 200 inches of snow per year. 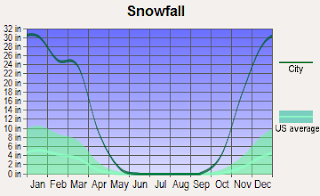 As would be expected, the daily high, low, and average temperatures also fall below the national average. 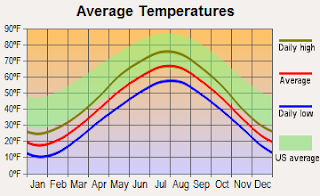 According to the chart below, only around 15 percent of the days in Marquette are clear of clouds. 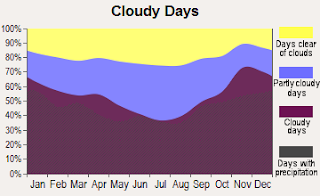 One of the impacts on snowfall is the average temperature of Lake Superior's water. I was curious what the long term trend has been. The lake’s surface water temperatures have only been monitored for 31 years when a series of buoys were placed around the lake by the National Oceanic Atmospheric Administration (NOAA) in 1979.

Here is a satellite view of Lake Superior as well as a chart showing the depth variation. 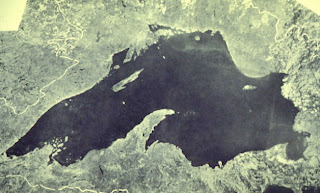 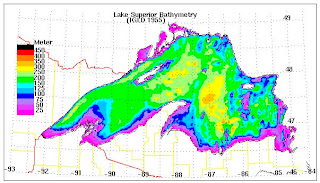 Conditions can change quickly on Lake Superior. A couple of days after the record was set -- on August 14 and 15 last year -- the strongest sustained summer wind event on record occurred, mixing the warm surface waters with cooler waters below, dramatically cooling off the surface of the lake, which dropped from 68.7 to 59°F (15°C) in just two days.” The established average water surface temperature for Lake Superior in August is 56°F (13.4°C).  Below is a chart showing the trends leading up to August 11th last year. 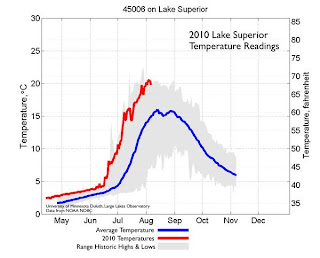 The chart below shows that the warming trend of Lake Superior's water temperature continued in 2011.

The warmer lake caused stratification of hot and cold waters by June in 2010, a month or so earlier than usual. In summer, the colder water sinks as warmer water stays near the surface. The early warming in 2010 relates to the lack of ice cover the previous winter. With little ice cover, the lake, just like a giant solar panel, absorbed energy (and heat) from the sun.

While researchers know what happened with the water temperatures, they don’t know exactly how it will influence the lake’s complex eco-systems and water circulation. Warmer waters may drive some fish, like lake trout, deeper while certain invasive species, such a zebra mussels, kept in check by the lake’s usually chilly temperatures, may have get a better foothold.

Lake Superior was not the only large lake in hot water. Lake Michigan exceeded its all-time record temperature and Lake Huron tied its previous record. Lakes Ontario and Erie did not exceed previous records.

Just for comparison purposes, the following chart shows the temperature differences between the great lakes.

Other data comparing the five great lakes is below.

The two biggest influences on Lake Superior's water temperature is winter ice cover and summer air temperatures. One of the main reasons why Lake Superior's average water temperature is increasing is because of the decrease in ice cover during the winter months. The annual ice cycle for Lake Superior consists of a period of increasing shore ice in December and January leading to seasonal maximum ice which occurs sometime between mid-February and the first week in March, followed by decreasing ice and a loss of all ice cover that occurs between mid-to-late March and mid-to-late April. With the exception of portions of the east lake basin in January, ice cover on Lake Superior has varied over the last 40 years from less than 10 percent to over 90 percent.  Below is a chart showing the ice cover in 1973. 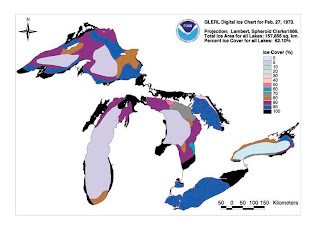 Here is an actual satellite photo taken in early March 2010 showing the lack of ice on Lake Superior. 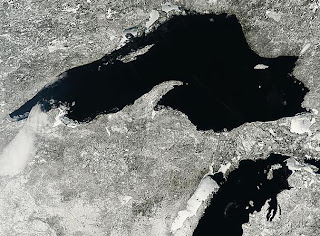 Here is a chart also showing the lack of ice cover

For comparison, here is a picture taken in 2009 showing that most of the lake was covered. 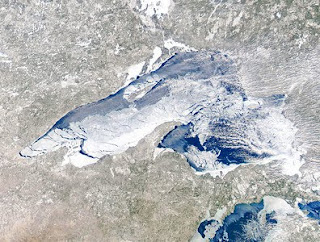