Thunderstorms have hit parts of the Upper Peninsula over the last two days, so I decided to do a blog posting on them. 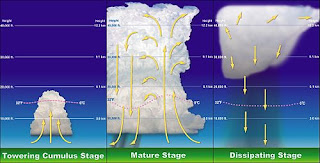 A thunderstorm is a storm that contains lightening and thunder which is caused by unstable atmospheric conditions. When cold upper air in the atmosphere sinks and warm moist air rises, storm clouds or 'thunderheads' develop resulting in thunderstorms. Severe thunderstorms can bring in heavy rains which can cause flash floods, strong winds, lightening, hail and tornadoes. 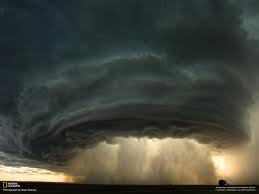 The National Weather Service defines a thunderstorm as severe if it contains hail that is three quarter of an inch or wind gusts at 58 mph or higher. These storms are constantly monitored by the National Weather Service Storm Prediction Center in Norman, Oklahoma. A warning is issued by this center to the areas where the severe thunderstorm or a tornado is predicted. 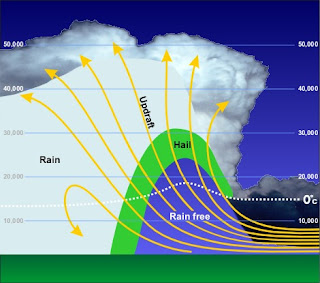 The type of cloud which is usually responsible for thunderstorms is 'cumulonimbus' (a Latin word which translates to 'rain heaps'). These types of clouds can span the entire troposphere and can be more than 12 miles high. During extreme storms, the updrafts can reach as high as 100 mph while the downdrafts can be even higher. Airplanes totally avoid these types of clouds as the turbulence found inside them are usually on the extreme side. 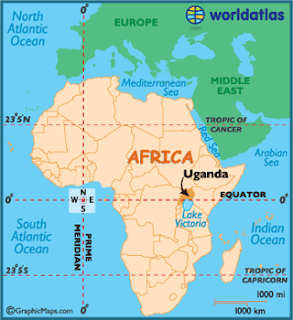 Once upon a time, the thunderstorms were classified simply as light and severe. However, with an increase in understanding and better equipment, thunderstorms are now classified into the following four categories based on the physical characteristics of the storm:

•Single Cell Thunderstorms: have a lifespan of about 30 minutes and are not severe. The storms of this kind are rare and as these occur randomly, they are very difficult to forecast.

•Multi-cell Cluster Storm: are the most common type of thunderstorms and occur in a group. Storms of this kind can persist for a few hours and can produce moderate sized hail and weak tornadoes.

•Multi-cell Line Storm: consists of a long line of thunderstorms that can produce hail the size of golf balls and weak tornadoes. Storms of these kinds can easily be predicted with the help of radar.

•Super-cell Storms: although rare are highly organized thunderstorms. Storms of this kind pose a high threat to life and property as these can produce strong to violent tornadoes. 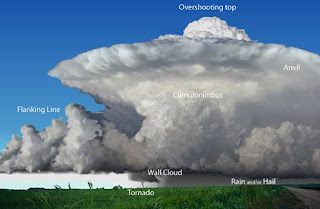 Here are some interesting thunderstorm facts:

•There are about 1800 thunderstorms occurring at any moment across the world. 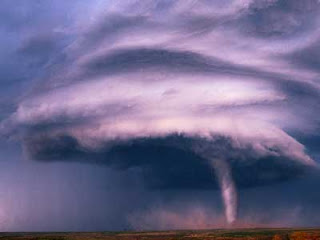 •A severe thunderstorm can produces winds that can cause as much damage as a weak tornado and these winds can be life-threatening. Further, thunderstorms of this degree can produce hail that can be three-fourth of an inch in diameter that fall at a speed more than 100 mph. Hailstones of this size cause more than $1 billion damage of properties and crops annually. 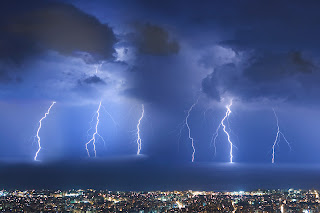 •We all know that light travels faster that sound and this is the reason as to why we can see the lightening before we hear the thunder. To calculate the distance that you are away from the thunder, count the seconds that has passed between a lightening and the next sound of thunder and divide the duration by five. The result will give you the distance in miles.