With my month off technology and my Grand Marais adventure posts, it has been quite some time since I checked in with the progress of the Mars rover, Curiosity.  Given that it was so cold and snowy yesterday, I did not get out to exercise.  Just could not do it.  So today, I checked in with the website http://mars.jpl.nasa.gov/msl/multimedia/images/?s=1. 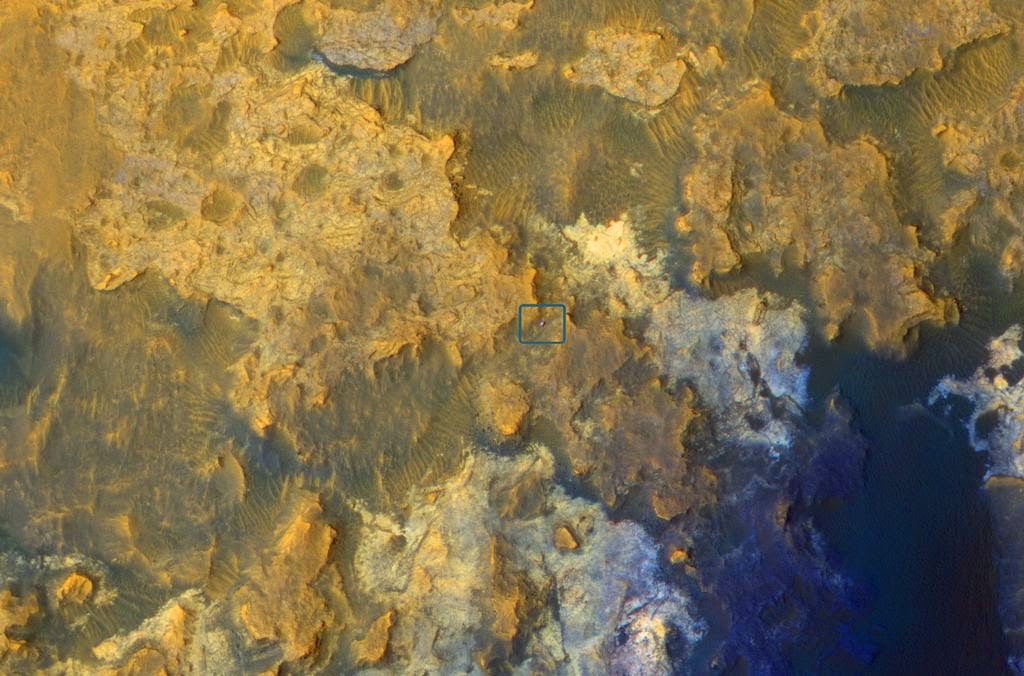 The above photo shows a view from NASA's Mars Reconnaissance Orbiter taken on April 8, 2015, catches sight of NASA's Curiosity Mars rover passing through a valley called "Artist's Drive" on the lower slope of Mount Sharp.   It shows the rover's position after a drive of about 75 feet (23 meters) during the 949th Martian day, or sol, of the rover's work on Mars. North is toward the top. The rover's location, with its shadow extending toward the right, is indicated with an inscribed rectangle. The view in this image covers an area about 550 yards (500 meters) across. 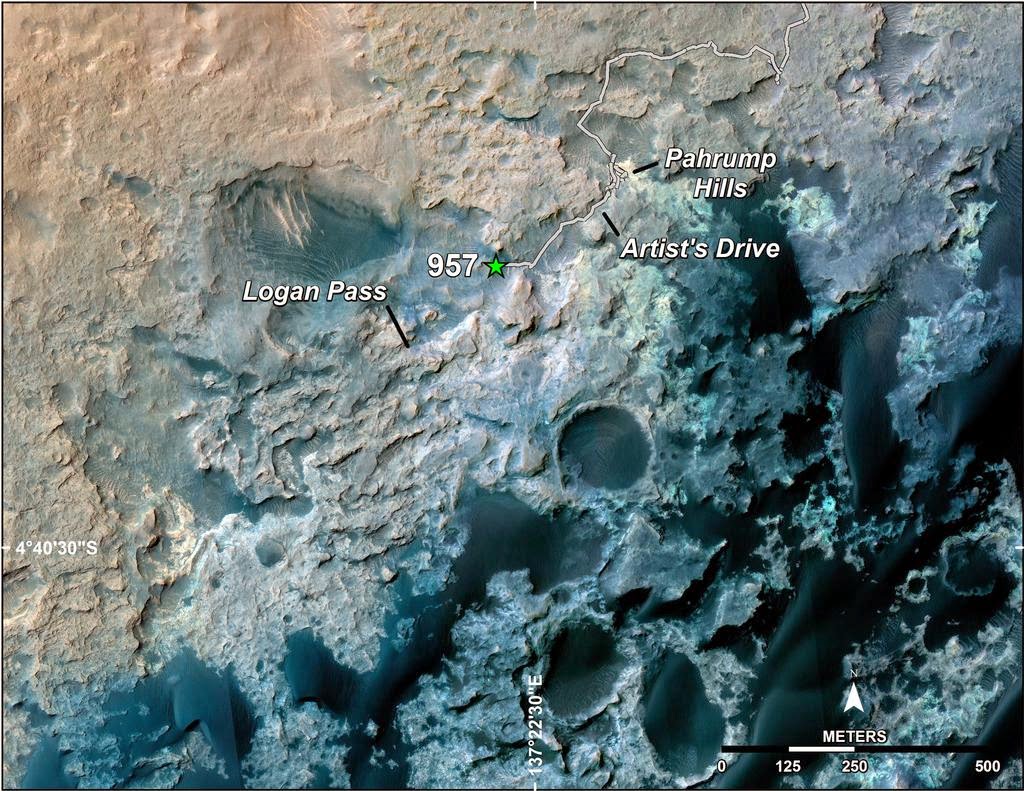 A green star in the above photo marks the location of NASA's Curiosity Mars rover after a drive on the mission's 957th Martian day, or sol, (April 16, 2015). The map covers an area about 1.25 miles (2 kilometers) wide.

Curiosity landed on Mars in August 2012. The drive on Sol 957 brought the mission's total driving distance past the 10-kilometer mark (6.214 miles). The rover is passing through a series of shallow valleys on a path from the "Pahrump Hills" outcrop, which it investigated for six months, toward its next science destination, called "Logan Pass."

NASA's Curiosity Mars rover used its Navigation Camera (Navcam) to capture this view on April 11, 2015, during the 952nd Martian day, or sol of the rover's work on Mars. The rover's location was in a valley called "Artist's Drive" on the route up Mount Sharp. The view spans from east, at left, to southwest, at right. Upper Mount Sharp appears on the horizon at left. 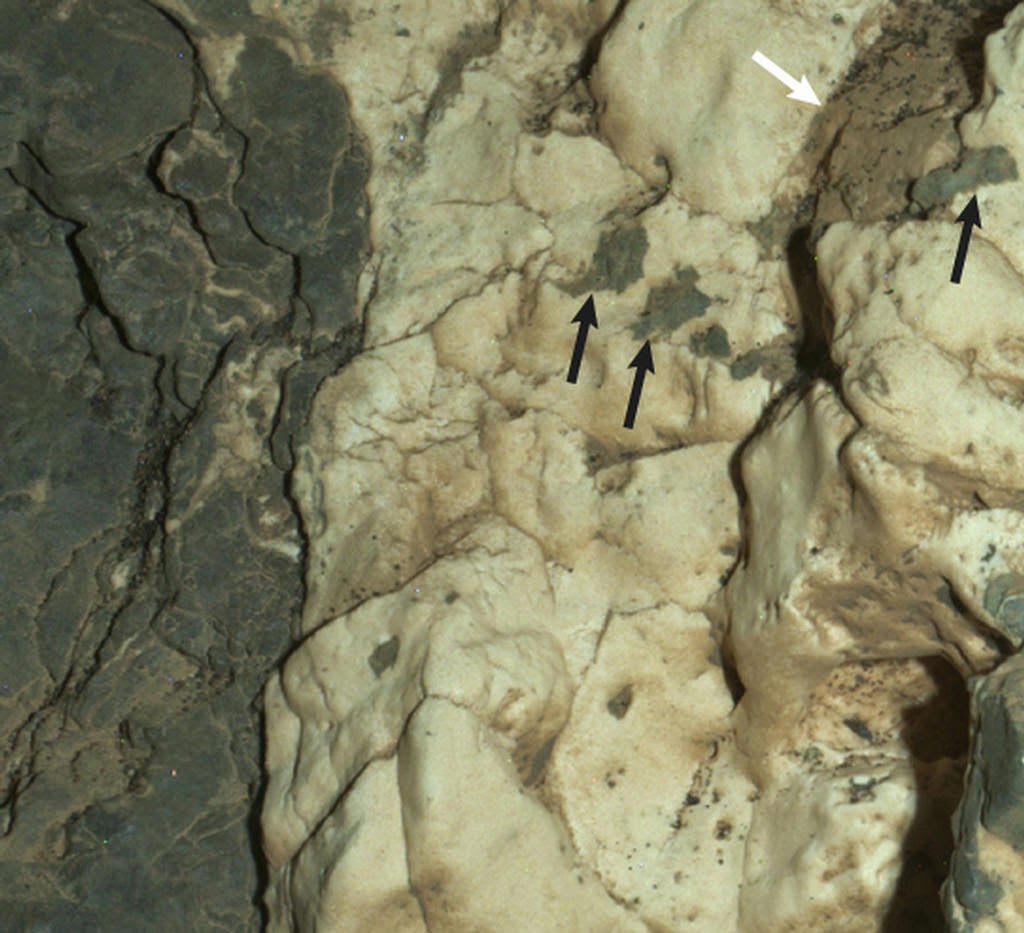 This view from the Mars Hand Lens Imager (MAHLI) on the arm of NASA's Curiosity Mars rover is a close-up of a two-tone mineral vein at a site called "Garden City" on lower Mount Sharp. The area shown is roughly one inch (2.5 centimeters) wide. The image was taken at night, using illumination from MAHLI's light-emitting diodes, during the 935th Martian day, or sol, of Curiosity's work on Mars (March 25, 2015).

The vein includes both light-toned and dark-toned materials. The whiter material appears to have ripped up and incorporated portions of both the darker vein material (black arrows) in and a third material (white arrow ). The Curiosity mission's examination of material in these veins may provide clues about multiple episodes of fluids moving through fractured rock at this site. The fluid movement through fractures occurred later than wet environmental conditions in which the host rock formed, before it hardened and cracked.

This view from the Mast Camera (Mastcam) on NASA's Curiosity Mars rover shows a network of two-tone mineral veins at an area called "Garden City" on lower Mount Sharp.
The veins combine light and dark material. The veins at this site jut to heights of up to about 2.5 inches (6 centimeters) above the surrounding rock, and their widths range up to about 1.5 inches (4 centimeters). Figure 1 includes a 30-centimeter scale bar (about 12 inches).

Mineral veins such as these form where fluids move through fractured rocks, depositing minerals in the fractures and affecting chemistry of the surrounding rock. In this case, the veins have been more resistant to erosion than the surrounding host rock. 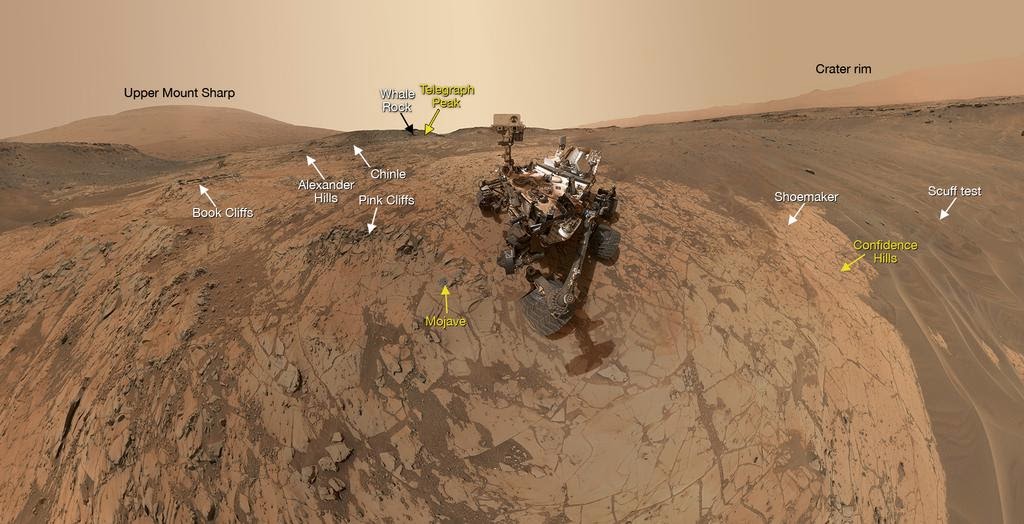 This self-portrait of NASA's Curiosity Mars rover shows the vehicle at the "Mojave" site, where its drill collected the mission's second taste of Mount Sharp.

The scene combines dozens of images taken during January 2015 by the Mars Hand Lens Imager (MAHLI) camera at the end of the rover's robotic arm. The pale "Pahrump Hills" outcrop surrounds the rover, and the upper portion of Mount Sharp is visible on the horizon. Darker ground at upper right and lower left holds ripples of wind-blown sand and dust. 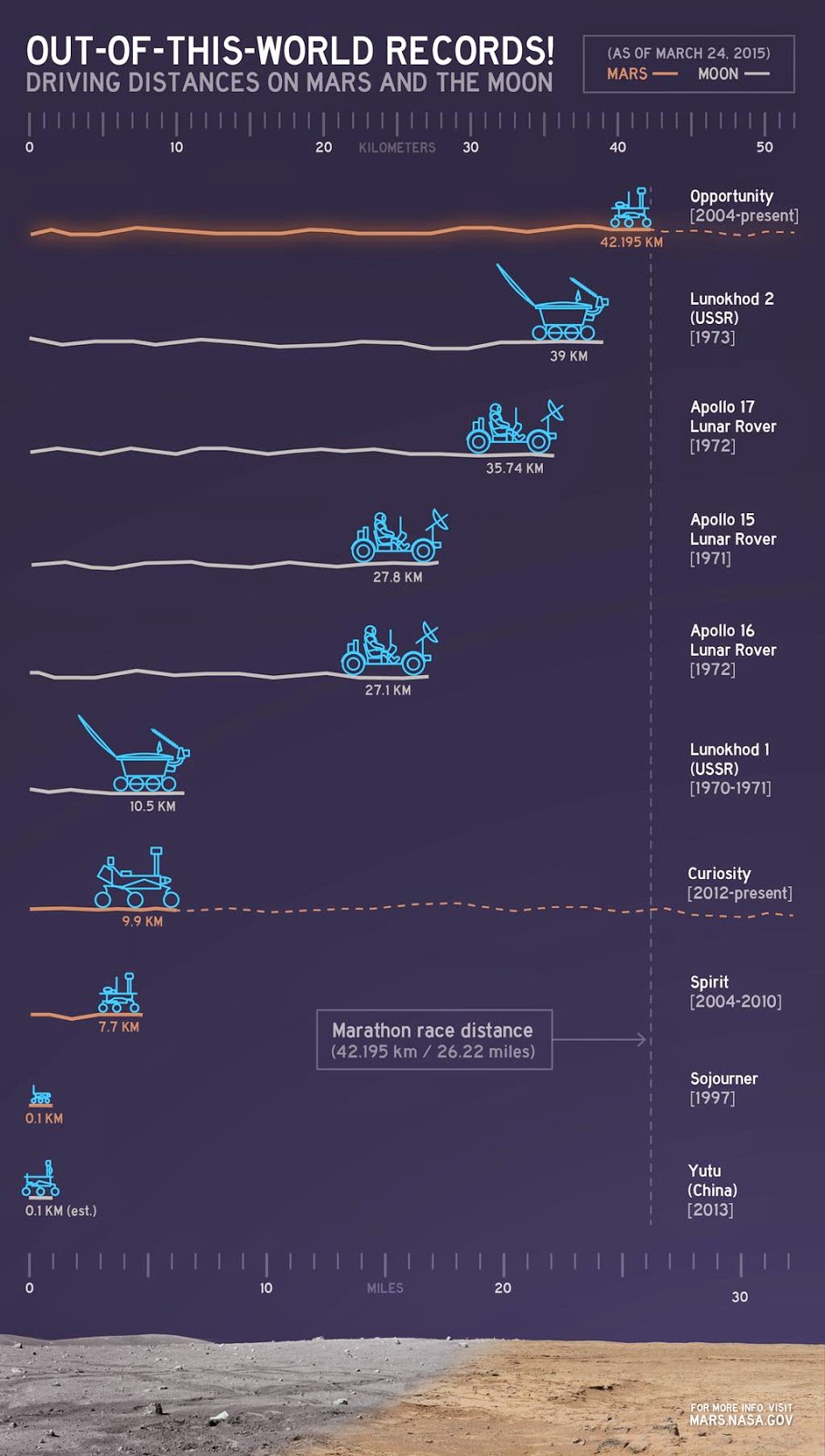 This chart illustrates comparisons among the distances driven by various wheeled vehicles on the surface of Earth's moon and Mars. Of the vehicles shown, the NASA Mars rovers Opportunity and Curiosity are still active and the totals for those two are distances driven as of March 24, 2015.