For today's posting I decided to check in with the Mars rover, Curiosity at the web page http://www.nasa.gov/mission_pages/msl/images/index.html . 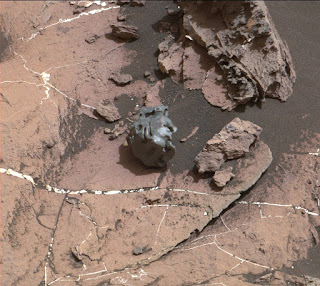 The dark, smooth-surfaced object at the center of this Oct. 30, 2016, image taken by NASA's Curiosity Mars rover was examined with laser pulses and confirmed to be an iron-nickel meteorite.  The grid of shiny points visible on the object resulted from that laser zapping. The meteorite is about the size of a golf ball.  It is informally named "Egg Rock," for a site in Maine. Locations around Bar Harbor, Maine, are the naming theme for an area on Mars' Mount Sharp that Curiosity reached in October. Iron-nickel meteorites are a common class of space rocks found on Earth, and previous examples have been found on Mars, but Egg Rock is the first on Mars to be examined with a laser-firing spectrometer. 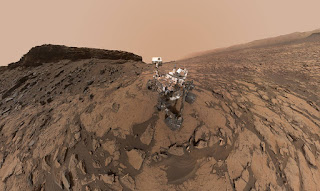 This self-portrait of NASA's Curiosity Mars rover shows the vehicle at the "Quela" drilling location in the "Murray Buttes" area on lower Mount Sharp. 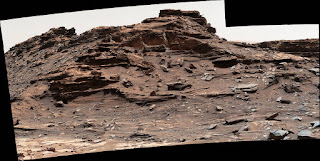 The top of the butte in this scene  stands about 16 feet (about 5 meters) above the rover and about 82 feet (about 25 meters) east-southeast of the rover. Mastcam's right-eye camera took the component images of this mosaic on Sept. 1, 2016, during the 1,448th Martian day, or sol, of Curiosity's work on Mars.The site is in the scenic "Murray Buttes" area, where individual buttes and mesas were assigned numbers.  This one is "M9a." 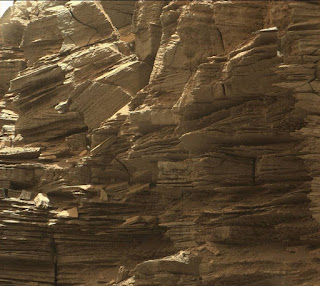 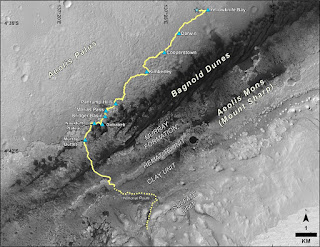 This map shows the route driven by NASA's Curiosity Mars rover from the location where it landed in August 2012 to its current location.
Posted by Karen Brzys at 7:22 AM