I returned earlier this week to Grand Marais after my last show of the year and visiting friends and family.  I must admit that I took time over the last few days to recover from a crazy busy last nine months.  I probably should have taken another year to finish the Grand Marais history book -- but I successfully cranked up the gear last winter and spring and finished the book in time to get printed copies back from the printer by early August.  This summer was also busy due to the 50th anniversary of the Pictured Rocks National Lakeshore and the 100th anniversary of the national park system.  There were definitely more people who came into the museum including more than usual first-timers.  Once the museum was closed for the season at the end of September, October was busy with a lot of private museum appointments, finishing several custom mineral art orders, getting ready for the Mason, MI show, and other tasks that didn't get done during the busy summer.  So this past few days I got a few hours of work in each day -- but that is all.  I took time to relax and recuperate.

Today I am going out on a hike, so tomorrow I will have some Grand Marais photos.  Today I decided to check in with one of my favorite NASA web pages:  http://earthobservatory.nasa.gov/ 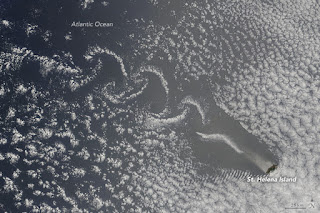 Mountain peaks slice through the clouds above St. Helena Island, creating Von Karman vortices. The island is located in the South Atlantic. Such spiral cloud formations occur commonly in nature, They are called Von Kaman vortexes.

The vortex develops because there is lot of turbulence at the edges of the mountain and not at the middle where the mountain blocks air movement, The lowest portion of the atmosphere, which reaches down to the Earth’s surface along the flank of the mountain (called a planetary boundary layer) develops a Von Karman vortex.  These vortexes also form the same sort of pattern that trails behind a rock in a stream or in the air behind the tip of an airplane wing.

In the image above, St. Helena Island disrupts the clouds, forcing them to bunch up and create spiral patterns as they push past the island. Located in the South Atlantic, the remote island sits more than 1950 kilometers (1,210 miles) west of Africa at the latitude of Namibia and Angola. The highest point, Diana’s Peak, stands 820 meters (2,685 feet) above sea level.

Another cloud formation, rippling gravity waves, trails to the southwest of the island. 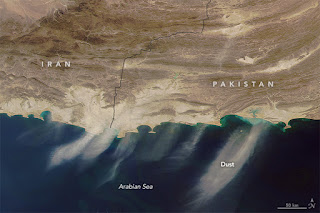 On October 26, 2016, northeasterly winds were dominant and blew several dust plumes off the coast of Iran and Pakistan.  The image was obtained by a NASA satellite.

There is more than one way for iron to get into the central Gulf of Alaska, but none rival the visual spectacle of wind-blown plumes of dust from from Alaska’s Copper River Valley.
A NASA satellite captured these images on October 23, 24, and 25, 2016. Much of the dust is comprised of “glacial flour” or “rock flour”—a silty powder with grains finer than sand. This iron- and feldspar-rich substance forms when glaciers grind against underlying bedrock. Winds tend to loft it in the fall when river levels are low and snow has not yet fallen.

While coastal waters in this part of Alaska have relatively high levels of iron, the micronutrient tends to be in short supply in deeper waters in the middle of the Gulf of Alaska. Soluble iron is an essential nutrient in marine ecosystems because phytoplankton—which sit at the center of marine food webs—depend on it to develop. These floating microscopic plant-like organisms are eaten, in turn, by everything from zooplankton to whales. So an ocean without much phytoplankton is often an ocean without much life at all.

Dust storms play a key role in fueling phytoplankton blooms by delivering iron to the Gulf of Alaska. Even a small addition of iron there can spur a bloom.

While the relationship between iron and phytoplankton is understood in broad terms, there are many details about the process in the Gulf of Alaska that are still unknown. For instance, what happens to iron that does not get used quickly? It may remain near the surface all winter and promote phytoplankton blooms in the spring, when more light is available. Or it may just sink.

To help clarify the role of dust storms, a small team of NASA-funded scientists have been studying the area since 2011 with satellites and with ground-based air monitors on Middleton Island. The island sits right in the middle of many dust plumes streaming from the Copper River delta.
Posted by Karen Brzys at 9:23 AM