While on our adventure the other day, Jamey spotted some fisher tracks. 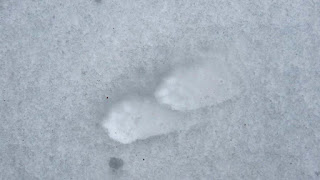 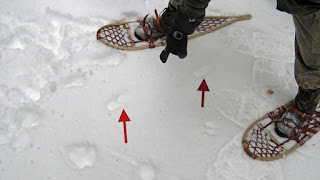 I was not very familiar with this animal, so I decided to do a blog posting. 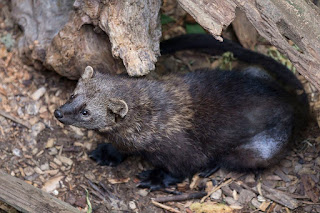 The fisher is a small mammal native to the boreal forests in Canada and the northern U.S.  It is a member of the mustelid (weasel) family. It is closely related to but larger than the American marten. Although it is also called a fisher cat, it is not a feline. 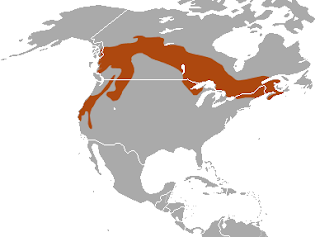 Males and females look similar. Adult males are 35–47 inches long and weigh 8–13 pounds. Adult females are 30–37 inches long and weigh 4–6 pounds. The fur of the fisher varies seasonally, being denser and glossier in the winter. During the summer, the color becomes more mottled, as the fur goes through a moulting cycle. The fisher prefers to hunt in full forest. Though an agile climber, it spends most of its time on the forest floor, where it prefers to forage around fallen trees. An omnivore, the fisher feeds on a wide variety of small animals and other things. It prefers the snowshoe hare and is one of the few animals able to prey successfully on porcupines. Despite its common name, the fisher rarely eats fish. Fishers are generalist predators. In addition to preying on snowshoe hare and porcupine, they are also known to eat insects, nuts, berries, and mushrooms. Since they are solitary hunters, their choice of prey is limited by their size. Analyses of stomach contents and scat have found evidence of birds, small mammals, and even moose and deer—the latter two indicating that they are not averse to eating carrion. Fishers have been seen to feed on deer carcasses While the behavior is not common, fishers have been known to kill larger animals, such as wild turkey, bobcat, and lynx.

Fishers are most active at dawn and dusk.  They are solitary, associating with other fishers only for mating purposes. Their hunting range varies from three square miles in the summer to eight square miles in the winter. Male and female fishers have overlapping territories. 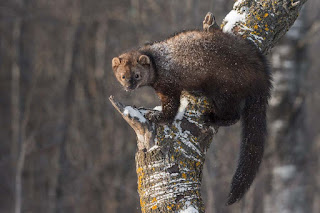 The reproductive cycle of the fisher lasts almost a year. Female fishers den in hollows of old grown threes, giving birth to a litter of three or four kits in the spring. They nurse and care for their kits until late summer, when they are old enough to set out on their own. 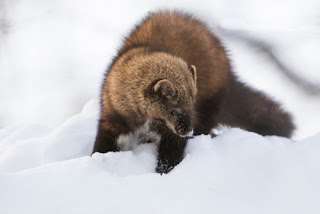 Fishers have few predators besides humans. They have been trapped since the 18th century for their fur. Their pelts were in such demand that they became extinct in several parts of the United States in the early part of the 20th century. Conservation and protection measures have allowed the species to rebound, but their current range is still reduced from its historic limits. In the 1920s, when pelt prices were high, some fur farmers attempted to raise fishers. However, their unusual delayed reproductive cycle made breeding difficult. When pelt prices fell in the late 1940s, most fisher farming ended. While fishers usually avoid human contact, encroachments into forest habitats have resulted in some conflicts. 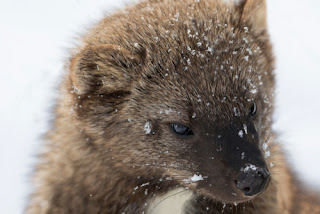