In today's blog update, I will include the second half of the photos I took during my first snowshoe of the season. It was an incredibly grueling snowshoe with lots of up and down icy slopes in the dunes.

Once into the dunes, I snowshoed in a diagonal to the northeast.  When I was about half way across the dunes, I headed due east before finding a deer trail on the east side of a finger-shaped forest that intrudes into the dunes.  The photo below shows a picturesque valley dotted with juniper bushes. 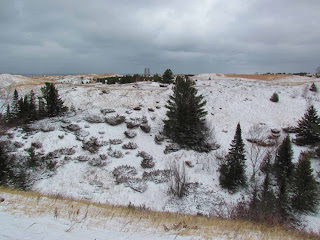 This shot I took looking to the northeast.  Notice the ridge that narrows past the dune grass.  It is not easy to snowshoe across these skinny ridges. 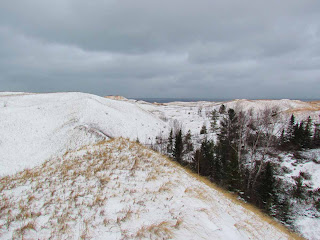 The next photo was taken as I faced southwest.  In the background, notice the Munising Moraine that runs from the left side of the picture to the center.  Originally, geologists thought that this east-west running mound was a terminal moraine formed when till (stones, earth, and other debris) piled in front of a glacial sheet of ice after the glacier retreated north from the Grand Marais area around 11,000 years ago.  Research during the 1980s, however, determined that instead the fifteen mile long geologic structure formed when the glacier stalled in its retreat north.  If glaciers stay in the same place for a considerable amount of time, sediments are deposited from the outwash materials that flow off the front of the ice sheet.  Sometimes the material spreads evenly over great distances, such as what happened to form the Kingston Plains.  Other times the deposits pile up into mounds.  Although the Munising "moraine" seems significant in height, it really is not very high relative to the height of the glacier which is thought to have been between one and two miles high. 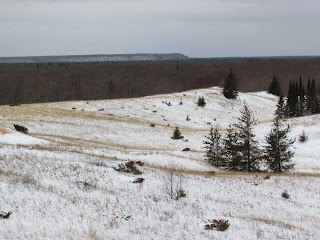 In the scene below, I liked the combination of ghost forest stump, juniper bush, white birches, and dusting of snow. 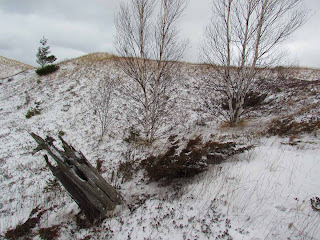 Below are a couple more pictures of the early winter dunes. 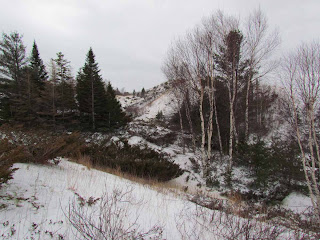 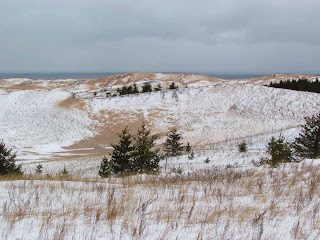 From the top of a high dune, I took this long distance shot of the Au Sable lighthouse.  There was a snow squall coming off the lake into the dunes as I took this picture. 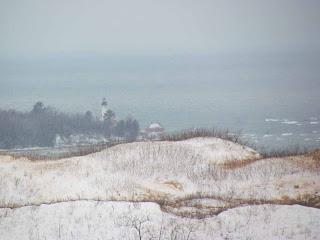 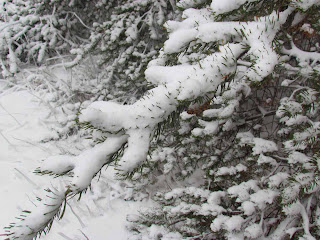 When I arrived back to my car, I was exhausted.  Even so -- it was a great first snowshoe!  The final picture below I took as I drove past Sable Lake.  Notice how there is more ice forming off shore. 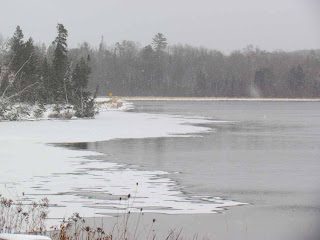