So for today's blog posting I checked in with NASA's earth observatory webpage: http://earthobservatory.nasa.gov/ 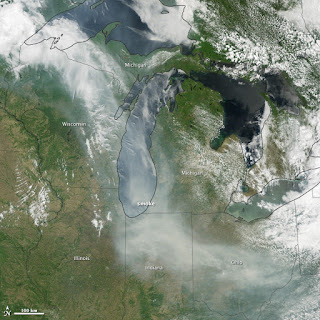 When I went to the website, I was surprised to see Michigan featured as the image of the day. Residents of the U.S. Midwest and eastern states might have noticed that the Sun appeared to have a slightly different hue in early June 2015. It was not your imagination. Smoke from wildfires in Canada cast a hazy mask over the atmosphere that gave the Sun a deeper orange-red color.  Above is a natural-color view of the smoke plume as it passed over Wisconsin, Michigan, Indiana, Ohio, and West Virginia on the morning of June 9, 2015. Smoke reached Mid-Atlantic states by that evening. 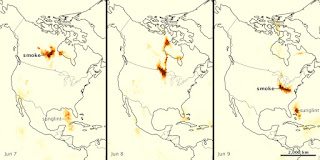 The series of images above shows the plume’s movement. Smoke from fires burning in Alberta, Canada, is visible on June 7 over Canada’s Saskatchewan and Manitoba provinces (left). The smoke entered the United States over Minnesota on June 8 (middle), and then moved over the Midwest on June 9 (right). 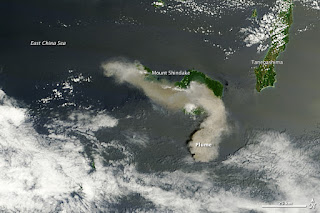 The photo above shows Mount Shindake, a stratovolcano on Kuchinoerabu island in southern Japan, sent a plume of ash and volcanic gas soaring into the atmosphere on May 29, 2015. Winds blew the plume, which obscured most of Kuchinoerabu, southeast toward Yakushima island. The plume reached a height of 9 kilometers (6 miles), according to news reports. The eruption forced more than 100 people to evacuate the island. 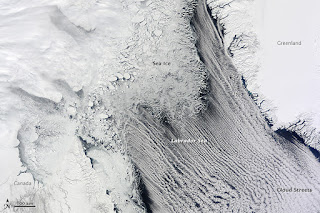 A satellite acquired the above natural-color image of sea ice and cloud streets between Labrador (Canada) and Greenland. 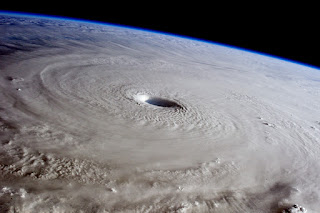 This photograph of super typhoon Maysak was taken by European Space Agency astronaut Samantha Cristoforetti as the International Space Station passed near the storm on March 31, 2015 . The category 4 typhoon was headed toward the Philippines.  It is unusual for the western Pacific to see such a strong storm so early in the year.

CITES:
NASA Earth Observatory imagea by Jesse Allen, using Terra MODIS data from the Land Atmosphere Near real-time Capability for EOS (LANCE) and Suomi NPP OMPS data courtesy of Colin Seftor (SSAI). Suomi NPP is the result of a partnership between NASA, NOAA and the Department of Defense. Caption by Kathryn Hansen.

Photo provided by ESA/NASA. It was taken by ESA astronaut Samantha Cristoforetti. Caption by Adam Voiland.
Posted by Karen Brzys at 10:50 AM