I caught a virus and have not been able to get out hiking this week.  I started feeling a bit better yesterday and feel even better today, so I do plan on going out hiking this afternoon.  So for today's blog post I decided to check in with the NASA website http://earthobservatory.nasa.gov/. 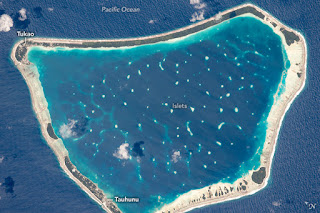 Using a high-magnification lens, an astronaut photographed almost the entire 10.5-kilometer long (6.5 mile) Manihiki Island, which lies in the middle of the Pacific Ocean. Manihiki is one of the larger islands in the remote Cook Island chain.

From space, Manihiki has the hallmarks of a classic atoll, with its fringing coral reef and a central lagoon. The coral lives in the warm, shallow waters which appear as the light blue zones around the main coastline and the numerous small islets within the lagoon. Most of the main atoll is made of sandy beaches without vegetation; it appears white or cream due to dead coral broken up by waves. Soils develop on the highest parts of these beaches, supporting dense stands of dark green trees. A few clouds cast shadows on the water.

Two small towns—Tauhunu and Tukao—appear as clusters of small bright patches etched into the forest. Aircraft land at the runway in Tukao after flying from New Zealand, which is 3,650 kilometers (2270 miles) to the southwest. Tourism is the main economic activity on the atoll, with diving in the lagoon and fishing in the waters outside it as the major attractions. Manihiki also produces rare black pearls, which are harvested from the local species of oyster.

The Cook Islands are an independent nation, in “free association” with New Zealand. The population is small (15,000 people in 2011) and situated mostly on Manihiki and the 14 other large islands. 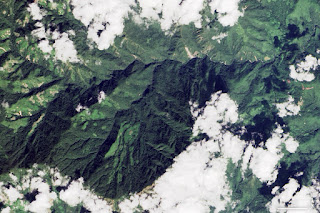 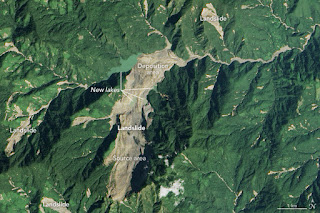 An Earth-observing satellite has observed one of the largest landslides not caused by an earthquake that scientists have observed in a decade. The landslide occurred in Chin, a remote state in western Myanmar (Burma), after slow-moving Tropical Storm Komen drenched the area in July 2015.

The Global Precipitation Measurement (GPM) core observatory observed rain rates of 150 millimeters (5.9 inches) per hour as Komen moved ashore from the Bay of Bengal on July 30. The intense rainfall triggered destructive flooding and numerous landslides. According to some estimates, more than 17,000 homes were destroyed in Myanmar, 46 people were killed, and hundreds of thousands of people were affected by the storm.

For months after the storm, monsoon clouds prevented satellites from collecting visible light imagery of Chin, however scientists found evidence of three large slides, including an exceptionally large event that moved 395 million tons of material.

On October 23, 2015, clouds cleared enough for a satellite to capture a view of several landslides in Chin, including a massive slide northeast of Tonzang. In the second image above, soil and debris from the landslide appears tan/brown in contrast to the green forests. Streams appear as narrow strips of brown because of mud and sediment washed away by the floods. The first image shows the same area on November 8, 2014. 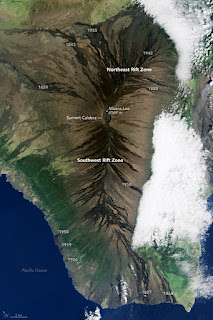 Hawaii’s Mauna Loa is the largest active volcano on Earth. The shield volcano rises gradually from sea level to 4,169 meters (13,678 feet). The flanks of the mountain extend another 5 kilometers (3 miles) below the surface, and the massive volcano pushes Earth’s crust down another 8 kilometers. Overall, Mauna Loa’s summit stands about 17,000 meters (56,000 feet) above its base. For comparison, Mount Everest stands 8,848 meters (29,029 feet) above sea level.

Though it has been quiet during recent decades, Mauna Loa has a long history of volcanic activity. Geologists estimate that the hotspot that feeds Mauna Loa first started to erupt about one million to 700,000 years ago. After underwater eruptions built up a seamount for hundreds of thousands of years, lava emerged above the Pacific surface about 400,000 years ago.

On average, Mauna Loa has erupted roughly every six years for the past 3,000 years. The most detailed eruption records are available for the past few centuries. Eruptions usually begin in the summit caldera with lava flowing down one of the volcano’s two rift zones: the Northeast Rift Zone and the Southwest Rift Zone. The rift zones are chains of craters and fissures that extend from the summit to the sea.

The Operational Land Imager (OLI) on Landsat 8 acquired this image of Mauna Loa on December 20, 2014. The elongated crater in the center is the summit caldera. Lava flows appear black; as they age, they fade and become gray. Very little vegetation appears on the summit of Mauna Loa because of the frequent lava flows and the high elevation. One of the largest flows in modern times occurred in 1950, when some 376 million cubic meters flowed out from the volcano and spread across 112 square kilometers (43 square miles) of the island.