THE SHARK IS GONE

Yesterday morning I had to leave early to go out of town.  I received a phone call after I left from a local contractor with whom I had left a phone message requesting that he and his crew remove the fish tug, Shark.  The tug has been sitting outside the museum since 1999.  Despite efforts to preserve this last hand-made fish tug left intact in the Great Lakes region, she could not be saved.  Given that the wood in the tug's hull has been giving away causing her to list dangerously to the east, she has become a liability.  I decided that rather than risk the tug falling on somebody -- she had to go.  I just did not expect the contractor to come yesterday while I was out of town.  Maybe it was a good thing that I was not there to watch.  I would have been very emotional.

Apparently they used a large excavator to lift the tug up and onto a flat bed trailer.  They then hauled her away.  As soon as I arrived home and received the message -- I drove over to the museum and she was gone.  I went back home and called the contractor to find out if she was still around Grand Marais.  Sure enough, she was so I went over and recovered a few momentous.

Below is a photo of the Shark the day of launch in 1940.  Shown in the picture is the museum founder, Axel Niemi, on the left and his dad, Otto, on the right.  It took Otto and his four sons (when they were home and available) two years to design and build the tug. 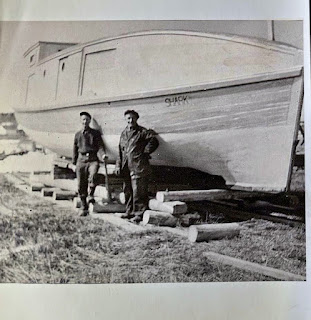 The Niemi family used the tug from 1940 until 1953 when fishing no longer was viable on Lake Superior due to the reduction of the fish population caused by the lamprey eel.  Otto retired and Axel started the Gitche Gumee Museum.

A college thesis was written by Jim Williams about the Niemi fish tugs.  At the end of his paper he summarized:

The story of the Shark’s later years remains incomplete. She sat on her marine railway outside Niemis net shack for three years. In 1956, two men from Cheboygan, Michigan, who had the idea of fishing for sturgeon in Lake Huron, approached Otto about buying the Shark. He told the “you can have it for a song.” Shark went off to Cheboygan on a flatbed semi-tractor after Axel helped load her. According to Axel, the men tried for two years, but never caught one sturgeon.


Shark reportedly saw some use as a pleasure boat after her time in Cheboygan. She then spent several years fishing out of St. Joseph, Michigan. Along the way, one of her owners took out the Fordson engine, re-powering her with a Perkins diesel with 60-70 horsepower, coupled to a Chris Craft transmission. Robert Trowbridge, of South Haven, acquired the boat, by now called Tug Her, in order to get the engine. He, of course, ultimately gave her to the Michigan Maritime Museum.

In 1999 I went looking for the Shark after I heard that she may still be intact.  I found her and was given the Shark by the Michigan Maritime Museum that had never used her in their exhibit.  She sat for many, many years in South Haven -- unprotected -- before I was able to acquire her.   I paid a professional boat hauler to move the tug from South Haven to Grand Marais.  Then through grant money and the help of volunteers -- we did our best to preserve her.  In 2005 I paid to have her professionally painted in another attempt to preserve her.  Unfortunately, time has finally done her in.

A picture of the Shark when I acquired her in 1999 is shown below.  Axel's brother, Arvi, is standing with the tug. 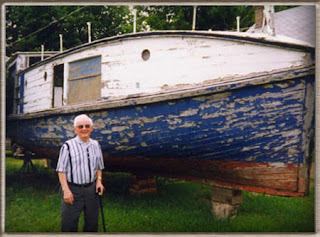 Below is a picture I took after the second time she was refurbished. 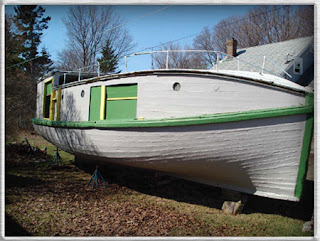 Below are a few photos I took today after she was hauled away. 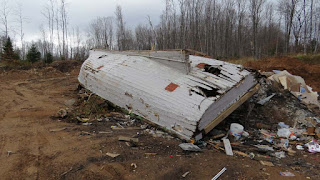 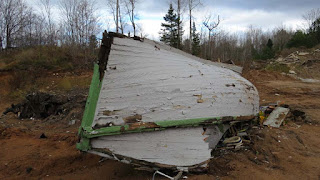 Below Tim Swift is shown helping me recover an artifact from the tug. 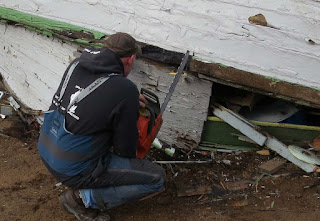