As some of you know, the NASA space probe, Cassini, recently had a close encounter with one of Saturn's moons, Enceladus.  This is the planet that has what scientists think are water geysers shooting off its south pole.  The space probe flew within 30 miles of the planet, right through the plumes.  We are waiting for the final analysis of the data, but the photos are amazing.  These photos are posted on the NASA website http://saturn.jpl.nasa.gov/photos/. 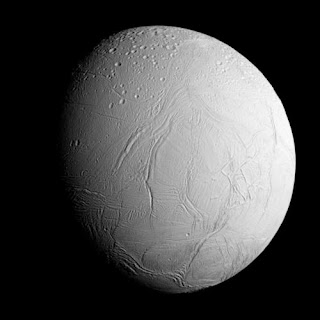 NASA's Cassini spacecraft captured the above photo as it neared icy Enceladus for its closest-ever dive past the moon's active south polar region. The view shows heavily cratered northern latitudes at top, transitioning to fractured, wrinkled terrain in the middle and southern latitudes. The wavy boundary of the moon's active south polar region -- Cassini's destination for this flyby -- is visible at bottom, where it disappears into wintry darkness. The image was taken in visible light with the Cassini spacecraft narrow-angle camera on Oct. 28, 2015. The view was acquired at a distance of approximately 60,000 miles (96,000 kilometers). 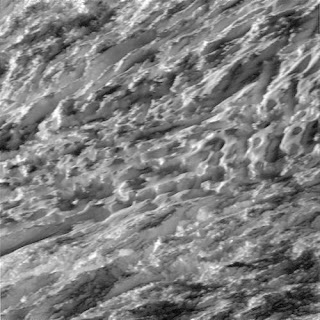 During this closest ever dive past the active south polar region, Cassini quickly captured glimpses of the fast moving terrain below. The image was taken on Oct. 28, 2015 from a distance of approximately 77 miles (124 kilometers) above Enceladus. 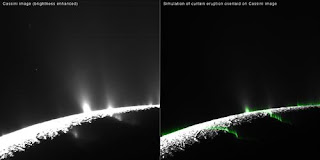 Researchers modeled eruptions on Saturn's moon Enceladus as uniform curtains along prominent fractures that stretch across the icy moon's south pole. They found that brightness enhancements appear as optical illusions in places where the viewer is looking through a "fold" in the curtain. The folds exist because the fractures in Enceladus' surface are more wavy than perfectly straight.


Phantom jets in simulated images produced by the scientists line up nicely with some of the features in real Cassini images that appear to be discrete columns of spray. The correspondence between simulation and spacecraft data suggests that much of the discrete-jet structure is an illusion.

Curtain eruptions occur on Earth where molten rock, or magma, gushes out of a deep fracture. These eruptions, which often create spectacular curtains of fire, are seen in places like Hawaii, Iceland and the Galapagos Islands. 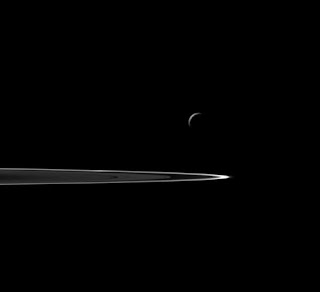 Following a successful close flyby of Enceladus, NASA's Cassini spacecraft captured this artful composition of the icy moon with Saturn's rings beyond. This photo was taken on Oct. 28, 2015at a distance of approximately 106,000 miles (171,000 kilometers) from Enceladus.


According to the wiki page https://en.wikipedia.org/wiki/Enceladus, Enceladus (pronounced /ɛnˈsɛlədəs/) is the sixth-largest moon of Saturn. It is only 500 kilometers (310 mi) in diameter.about a tenth of that of Saturn's largest moon, Titan. Enceladus is mostly covered by fresh, clean ice, reflecting almost all the sunlight that strikes it and making its surface temperature at noon reach only −198 °C. Enceladus has a wide range of surface features, ranging from old, heavily cratered regions to young, tectonically deformed terrains that formed as recently as 100 million years ago, despite its small size.

Enceladus was discovered in 1789 by William Herschel.but little was known about it until the two Voyager spacecraft passed nearby in the early 1980s.In 2005, the Cassini spacecraft started multiple close flybys of Enceladus, revealing its surface and environment in greater detail. In particular, Cassini discovered a water-rich plume venting from the south polar region of Enceladus.Cryovolcanoes near the south pole shoot geyser-like jets of water vapor, other volatiles, and solid material, including sodium chloride crystals and ice particles, into space, totaling approximately 200 kilograms (440 lb) per second.Over 100 geysers have been identified. Some of the water vapor falls back as "snow"; the rest escapes, and supplies most of the material making up Saturn's E ring According to NASA scientists, the plumes at Enceladus are similar in composition to comets.In 2014, NASA reported that Cassini found evidence for a large south polar subsurface ocean of liquid water within Enceladus with a thickness of around 10 km.

These geyser observations, along with the finding of escaping internal heat and very few (if any) impact craters in the south polar region, show that Enceladus is geologically active today. Enceladus is, like many satellites in the extensive systems of giant planets, trapped in an orbital resonance. Its resonance with Dione excites its orbital eccentricity, which tidal forces damp, resulting in tidal heating of its interior, and offering a possible explanation for the geological activity.
Posted by Karen Brzys at 10:44 AM