Yesterday it rained most of the day. Late in the afternoon I went over to Sable Lake to check on the progress of the ice melting. The wind concentrate the ice toward the south and west part of the lake leaving the east side of the lake ice free. It is amazing how fast open water appeared. 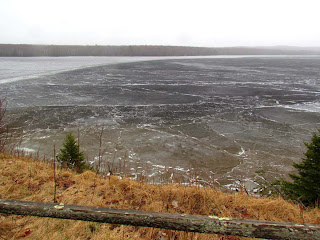 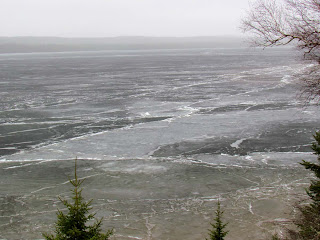 A couple of days ago I hiked down the Masse Homestead/Logslide trail and went up into the dunes. Along the trail I saw the first wild flowers of the spring. 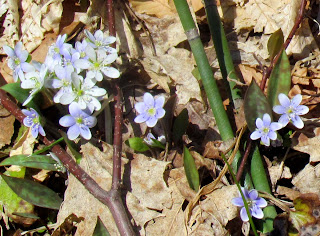 Soon the forest floor along this trail will be covered in wild flowers. It is almost as if the forest celebrates the coming of spring. 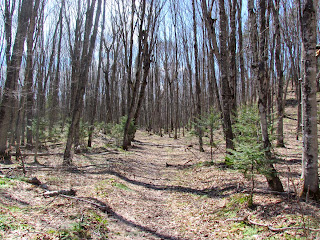 Up in the dunes I spotted this telegraph pole that has been split. I'm sure I've seen this pole before, but the weather over the fall or winter must have split it. 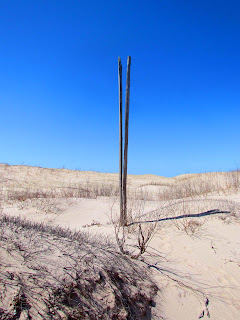 The last shot below shows two large trees that were cut down by beaver. These trees were more than 20 feet long and at least 12 inches in diameter. The beavers were bold, but not able to drag them away.

I have always been intrigued with beavers and decided to do a little bit of Internet research. 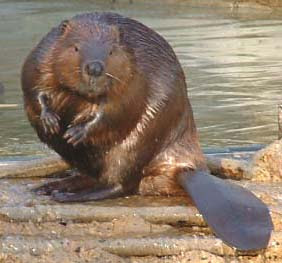 The beaver (genus Castor) is a primarily nocturnal, large, semi-aquatic rodent. Beavers are known for building dams, canals, and lodges (homes). They are the second-largest rodent in the world (after the capybara). Their colonies create one or more dams to provide still, deep water to protect against predators, and to float food and building material. The North American beaver population was once more than 60 million, but as of 1988 was 6–12 million. This population decline is due to extensive hunting for fur, for glands used as medicine and perfume, and because their harvesting of trees and flooding of waterways may interfere with other land uses.

Beavers are known for their natural trait of building dams on rivers and streams, and building their homes (known as "lodges") in the resulting pond. Beavers also build canals to float build materials that are difficult to haul over land. They use powerful front teeth to cut trees and other plants that they use both for building and for food. They usually drag and float the trees through the water. In the absence of existing ponds, beavers must construct dams before building their lodges. First they place vertical poles, and then fill between the poles with a crisscross of horizontally placed branches. They fill in the gaps between the branches with a combination of weeds, mud, and rocks until the dam impounds sufficient water to surround the lodge. The lodges are usually built near the dams. Each lodge has one nesting chamber located above the water’s surface and several entrances through underwater channels. Wonderful diggers, beavers may also burrow underground tunnels from the banks up to favorite feeding grounds and excavate channels to other parts of the stream or river.

Beavers live an average of 10 to 12 years in the wild. They generally mate for life and live in family units that consist of an adult male and female and three to four kits. Once they are old enough to leave the lodge, kits spend most of their time playing in the water around the lodge, but are buoyant and cannot dive. Young beavers usually stay with their parents—helping out with the family chores of maintaining the lodge and dam, until they reach sexual maturity at about two years of age. Then, chased away from their natal territory by their parents, they go stake their own claim usually downstream.

They are known for their alarm signal: when startled or frightened, a swimming beaver will rapidly dive while forcefully slapping the water with its broad tail, audible over great distances above and below water. This serves as a warning to beavers in the area. Once a beaver has sounded the alarm, nearby beavers will dive and may not reemerge for some time. Beavers are slow on land, but are good swimmers, and can stay under water for as long as 15 minutes.

Beavers do not hibernate, but store sticks and logs in a pile in their ponds, eating the under bark. Some of the pile is generally above water and accumulates snow in the winter. This insulation of snow often keeps the water from freezing in and around the food pile, providing a location where beavers can breathe when outside their lodge. 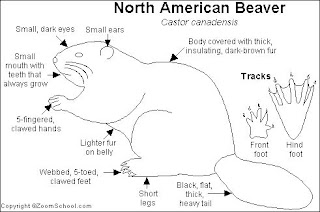 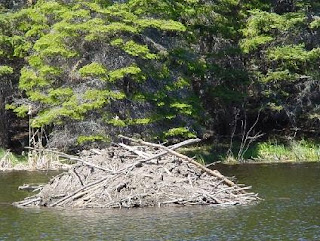 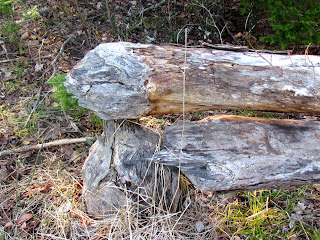