Spring Ski out to East Bay and Lonesome Point

The front that was supposed to swing past Grand Marais went south again -- which is the pattern most of the winter. I didn't mind since we had warm temperatures (upper 40s) and sun the last two days. It was so beautiful out that I have adjusted my work schedule so I can be out in the afternoon for my exercise, and I've been working into the wee hours of the morning on the online rockhounding adventures. Progress is going well.

A couple of days ago instead of skiing east of the school forest, I decided to head west toward what we locals call Lonesome Point. Actually, there no longer is a point like there was a couple of days ago. It has been many years since I was out that way -- it sure has changed.

When I was a young teenager, my sister and I used to rent a canoe from museum founder, Axel Niemi. We launched at the marina, canoed along the south side of the bay down the old river and into East Bay, and then carried the canoe across the peninsula near Lonesome Point. From there we would canoe over to the old island and along the north side of the bay back to the marina. As many of you know, the old river, East Bay, and the island are no longer in existence. The erosion has been tremendous. Below are pictures from 2005, 1964, and 1939. 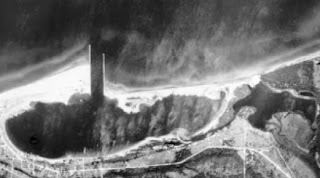 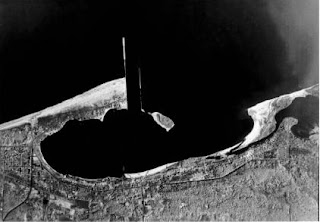 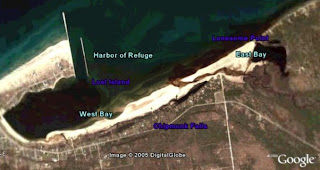 Below is a current photo taken yesterday. The red arrow shows my point of entry after skiing through the school forest. I took my skies off and walked onto the spit of land that is between the old East Bay (that is basically land locked) and Lake Superior. 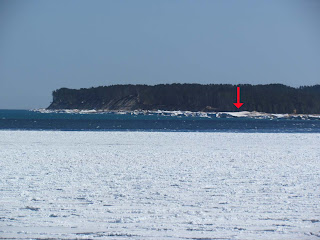 Here is a close up of the sand bluff east of the old East Bay area. 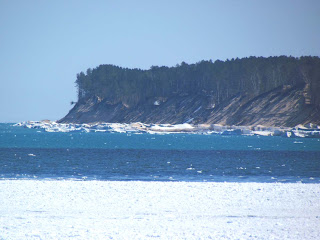 Here is a somewhat (not perfect) merged photo of East Bay, along with both separate shots. Back in the 1800s, the village of Grand Marais was originally started along East Bay, since this bay had better access from Lake Superior. The West Bay was originally land-locked, until settlers dug the channel. 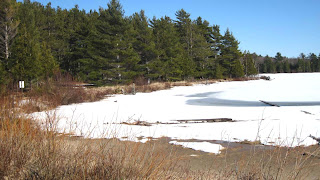 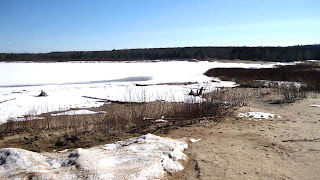 Here are some shots looking west from "Lonesome Point." Notice that the icebergs are sitting on a sand bar, and a temporary channel of melt water has accumulated between the ice and the beach. Also notice the tremendous quantity of driftwood strewn on the beach. This is another sign of the erosion. During storms, huge waves carve out the bottom of the dune, causing the top section with trees to topple and erode. 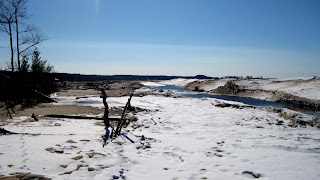 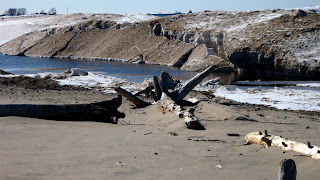 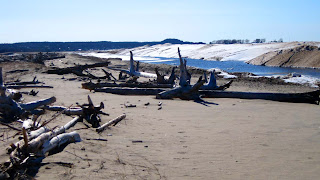 And a shot looking east... 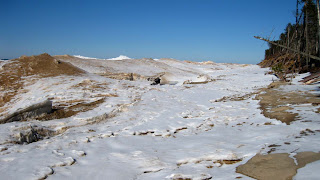