Yesterday morning we started at first light and had breakfast. Even though it gets into the 70s during the day, it is chilly at night. So I have been using the heater in the morning to take the chill off. The dealers in Quartzite, as I think I already explained, stretch over a three mile area. We heard that there were more rock dealers down at the other end, so we headed there. One of the first dealers I met was George Sechler, who owns Oasis Prospecting. 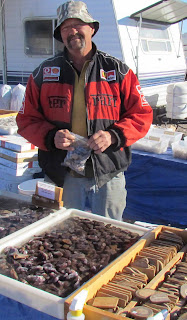 I must admit that George is the most adventurous rockhound I have ever met. He not only travels the world, but he spends weeks and months using Google Earth to find old mines, ancient river beds, and other geologic features that can lead him to incredible finds. For example, he found some jasper chips in the Sahara desert and after studying aerial images, determined that there was an ancient river bed that existed even before the Nile had carved its full path. Once he determined the path of the old river, he was able to find the source of jasper. He has also found minerals in Cambodia, Brazil, and many other places.

I spent around six hours meeting people, buying rocks, and lugging them back to my RV. By that time I had pretty much spent my budget – and I have not even been to the Tucson Show yet. That is OK, though, since I found so many great deals in Quartzite. I purchased a lot of new and different things that I have never carried before including perfect pyrite cubes in matrix, a whole flat of incredible Mexican Laguna agates, Royal Sahara Jasper, some bizarre iron concretions, more ocean jasper, a lot of pendants, calcite, spook rock, selenite swirls, obsidian, lots of slabs for making art, more polished stones including some great quality, Botswana agate, snakeskin agate, and more.

Mid-afternoon my friends and I decided it was time for us to get out into the field and do a little rockhounding. Gerald had bought the new Gem Trails of Arizona book and selected a site near Saddle Mountain, which is located half way between Quartzite and Phoenix. After an hour and a half drive, we pulled off the highway and headed to BLM government land.

The land was littered with rocks as well as cactus and scrubby desert bushes. In amongst the rocks are small pieces of macro quartz as well as chalcedony. Some of the chalcedony is formed into rose-like structures, and some actually have some fire agate. Considering that the rest of the desert rock, most of which is sedimentary, is monotone in color – the quartz and chalcedony are extremely obvious. In about an hour I collected a gallon bag.

The peaks of the mountains in this area are rugged and jagged.   It is a cool place to camp. 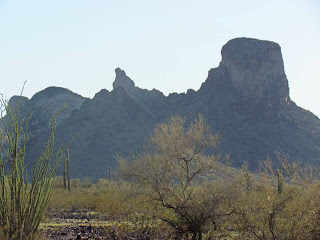 Do you see the chalcedony? 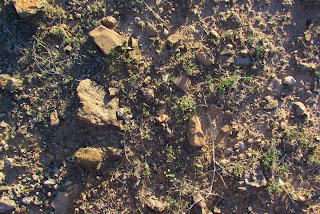 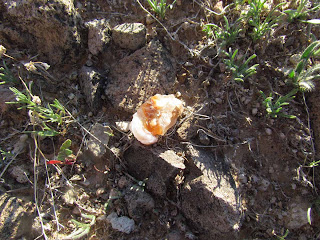 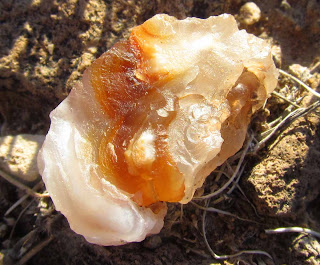 This is the mountain that is sitting right in front of us. 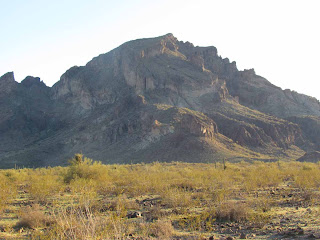 Of course there are cacti. 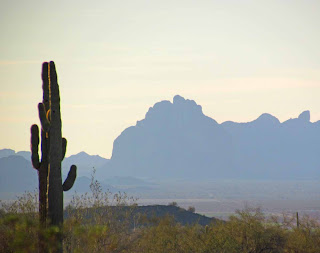 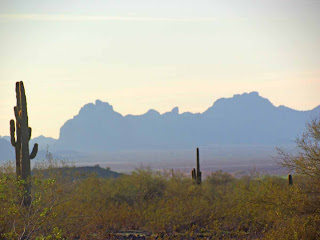 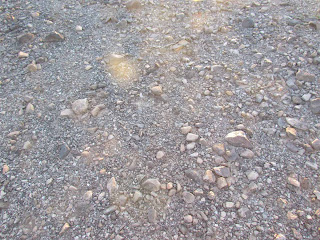 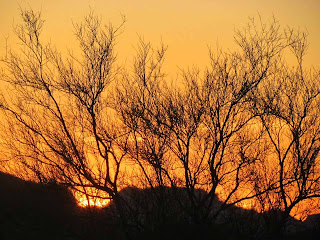 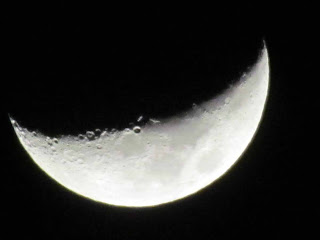 For the first time I used my camera's zoom to get a picture of a planet.  I'm not sure which one, and the picture is not in focus, but I enjoyed trying. 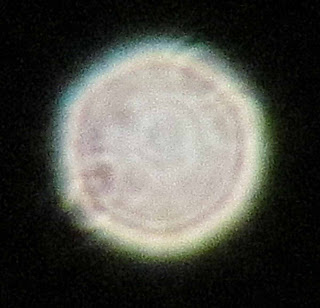