How to Identify a Meteorite

On one of my trips down state while visiting my friend, Steve, in Mount Pleasant, he had a gathering with some of his friends.   I ended up showing my "wowser" rocks to Matt and Helen Williams.   Matt is a science teacher and wanted to see the rocks. The next day we received a call from the Wiliams.  They wanted to meet with me to show me a rock.

The story about the rock is that several decades ago Helen's grandfather heard a loud noise outside his farm house. When he went out into his yard, there was a newly formed crater around ten feet deep with a small mound at the center.  Steam or smoke was coming out of that mound. They decided to dig in that mound where the found the rock pictured below.  The first shows shows Matt and Helen along with their daughter, Katey, and an exchange student staying with the family, Xlaashi Guo. 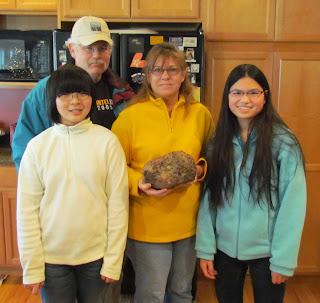 Here are some close ups of the rock. 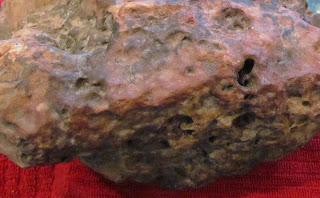 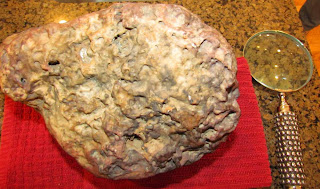 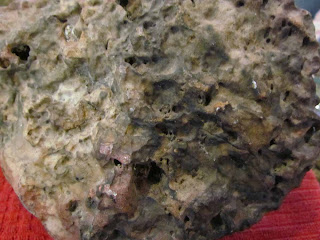 Helen explained that the grandfather never had the rock examined because he was afraid that it would be taken away.  They asked me to verify that it is a meteorite.  I am an agate person and am not familiar with the details of meteorite identification.  So yesterday I decided to do some Internet research.  The best web page I found is:  http://www.aerolite.org/found-a-meteorite.htm.  In fact, from this web page there is an option to pay $10 to have them examine photographs of suspect rocks.  Some of the facts they listed to help identify whether a rock is a meteorite are: