For a while I was doing better with posts -- until my laptop broke. A week ago Monday I was working away when all of a sudden my laptop told me the battery level was extremely low. That confused me because I had the computer plugged in. Well, for the second time the power jack broke, loosing its connection with the mother board, which prevented the battery from recharging. After quickly saving all the open documents and trying to shut down the computer, it went into a Windows update.  Then sure enough, with the "Do not shut down the computer" screen showing, the laptop ran out of power and shut down. OH NO! I had saved all the book files to an external drive the previous evening (thankfully), but had not saved the six hours of work from that morning to an external drive.

I called numerous computer repair places in the U.P. and northern lower, but was not able to find anyone who was willing to re-solder the connection. Apparently, this model of Asus laptop does not have an easy-to-repair connection between the power jack port and the mother board. I watched a couple of self repair videos on YouTube, and quickly realized how difficult it is to repair the solder joint and realized the repair was way beyond my skills. The videos taught me the proper terminologies, which improved my internet search. That is when I came across a web page from a computer repair shop in West Bloomfield. I called them Tuesday and decided to drive down on Wednesday. They explained that if the breaks were on the power-jack side of the connection -- they may be able to fix it. If the break was on the mother board -- they could not.  I was lucky since the breaks (yes plural) were on the power jack half.

After visiting a friend and seeing my son and his family for the first time in 14 months, I picked up my laptop on Friday morning and headed home. On Saturday morning work on the book resumed. I worked all day and evening on Saturday through Tuesday, trying to make up for lost time. On Tuesday I finished combining the text and photographs for all the book's main chapters. Whew! What a project. Here are the specifications:

Number of rocks and minerals featured or described: 39

Number of computer files used to compile the book: almost 9,000

There is still a lot to do to get a draft ready for review, but I am hoping to finish these tasks in the next couple of weeks. Then, the reviewers will take 2-3 weeks. Then I have to re-compile the text and images into publishing software. Unfortunately, the software will not allow direct import, so I will have to create the final draft paragraph by paragraph, image by image. To make sure the re-compiling is done accurately, I will have a couple of people review the final draft. Once all the final changes are made, I will send the files off to the printer!

Yesterday was the first time I took the time to get outside for exercise in a week and a half. My friend, Barb, and I went on an hour and a half ski in the school forest. I only took a couple of photos. 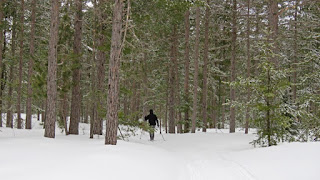 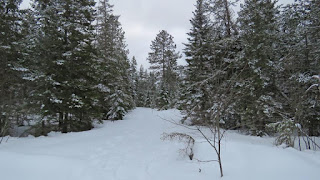 Lately I have been working up at around 5am. When I was drinking coffee this morning, I noticed the moon out my window. To get a better image, I went outside to take a couple of pictures, not realizing it was only 9 degrees. 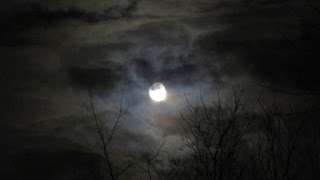 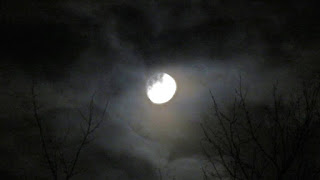