All About Puffball Mushrooms

The other day when I was mowing my lawn I spotted in the middle of one of my paths three large white mushrooms.

Looking toward the mushrooms.... 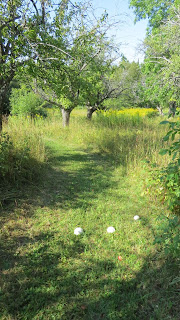 Looking back at the mushrooms.... 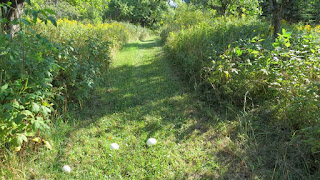 I mowed around them and then checked the Internet for identification.  This is one of the easiest mushrooms to identify since it is very different from other fungi.  A puffball is a member of the fungi division Basidiomycota. The distinguishing feature of all puffballs is that they do not have an open cap with spore-bearing gills. Instead, spores are produced internally, in a spheroidal fruitbody called a gasterothecium (gasteroid('stomach-like' basidiocarp). As the spores mature, they form a mass called a gleba in the center of the fruitbody that is often of a distinctive color and texture. The basidiocarp remains closed until after the spores have been released. Eventually, it develops an aperture, or dries, becomes brittle, and splits, and the spores escape. The fungi are called puffballs because clouds of brown dust-like spores are emitted when the mature fruitbody bursts, or in response to impacts such as those of falling raindrops. 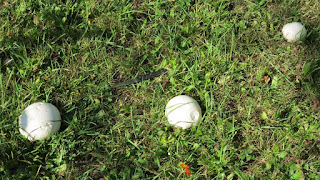 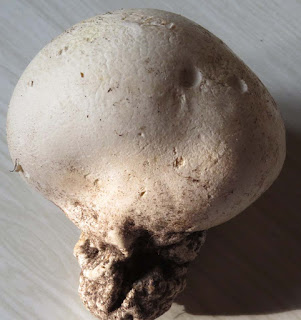 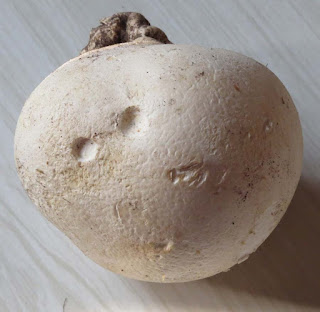 Puffballs come in many sizes, some as small as a marble and some as large as a basketball.  The three puffballs are shown below with a steak knife to show size. 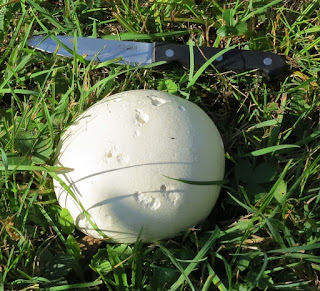 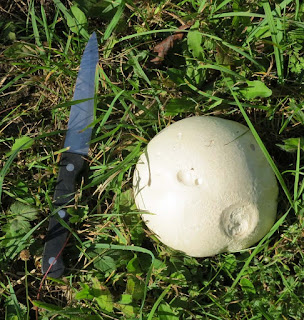 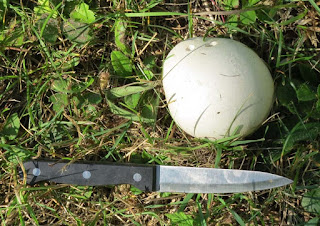 While most puffballs are not poisonous, some often look similar to young white poisonous mushrooms. It is for this reason that all puffballs gathered should be cut in half lengthwise. Young puffballs in the edible stage, before maturation of the gleba when the internal contents turn yellow, have undifferentiated white flesh within; whereas the gills of immature poisonous mushrooms can be seen if they are closely examined.  The larger puffballs when mature can release up to seven trillion spores. 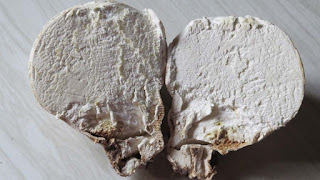 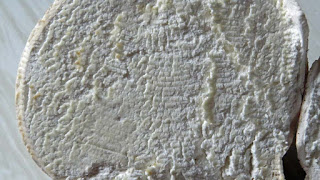 While the flesh is still white, puffballs may be cooked as slices fried in butter, with a strong earthy, mushroom flavor.  Some people refer to puffballs as "breakfast mushrooms" because they blend so well with eggs. But they also serve beautifully as side dishes with dinner entrees. A thick slab of puffball develops a lovely golden color when browned in butter. They are often cut into cubes for cooking.

Dip slices in a batter of egg and milk and cover with bread crumbs seasoned with salt and pepper. Sauté in butter and serve with a piquant sauce as the main course for a vegetarian dinner.

Thinly sliced and pan-seared large Calvatias can be used as crêpes. Rolled around crab meat, tuna, or other fillings, and held in place with a toothpick, they can be baked for your next party.
Chop and sauté them before freezing. The larger species may be sliced and slightly fried, then frozen for later use as crêpes. Separate each portion with waxed paper. Dehydrated puffballs can be powdered for flavoring bland foods.