Yesterday was a great day.  I finished the research and resumed writing on the Grand Marais history book!  In the spring I had written around 25 pages.  So yesterday I incorporated new material into the section that I already wrote.  This is not easy since I had to take special care to keep track of the figure numbers and reference cites.

The book starts with how indigenous people arrived in North America and migrated to the Upper Peninsula.  Then it will trace human history in the U.P. and describe how the early settlers used Grand Marais as a harbor of refuge.  Finally, the book will describe Grand Marais from the first trading post to modern times.  It is great to be writing!  Many have asked if the book will be available this summer.  At this point, I am not putting a deadline on the project.  I am going to work as hard as I can, but the book will get done when it gets done.  Hopefully, however, it will be available sometime this year.

Yesterday I did not get out and exercise so for today's post I am including a few of NASA's photos from the website http://earthobservatory.nasa.gov/. 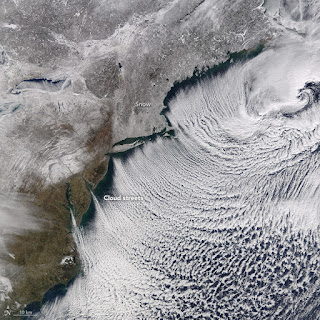 NASA’s Terra satellite acquired the above natural-color image of cloud streets spanning much of the East Coast of the United States on February 14th. The day was marked by a high-pressure system that brought frigid temperatures and strong north and northwest winds to much of the region.


Cloud streets—long parallel bands of cumulus clouds—form when cold air blows over warmer water and a warmer air layer (temperature inversion) rests over the top of both. The water gives up heat and moisture to the cold air above, and columns of heated air naturally rise through the atmosphere. The temperature inversion acts like a lid, so when the rising thermals hit it, they roll over and loop back on themselves, creating parallel cylinders of rotating air. As this happens, the moisture cools and condenses into cumulus clouds that line up parallel to the direction of the prevailing winds. 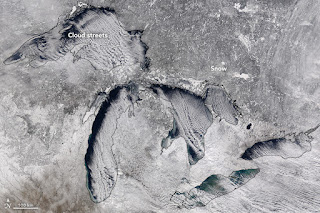 
The same cloud streaks also formed over the Great Lakes as shown in the above image. 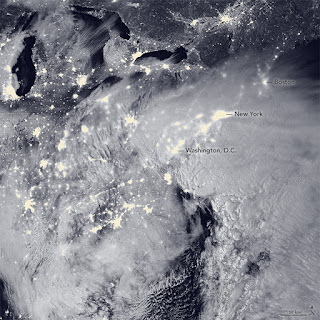 The above image shows a snowstorm by moon light.  A massive winter storm system pummeled the eastern United States in late January 2016, with two low-pressure systems merging into a storm that dropped heavy snow from Virginia to New England. By late afternoon on January 23, snowfall totals were approaching records in several states, and hurricane-force winds were battering the coastlines and leading to serious flooding. The storm combined a very energetic jet stream disturbance with warm, Gulf Stream water, a deep sub-freezing air layer, and tropical moisture, and resulted in an East Coast snowstorm for the record books. The storm is called a nor’easter, or coastal low—a wintertime breed of mid-latitude cyclone powered by contrasting air temperatures. The Arctic air mass that recently invaded the mid-Atlantic, combined with an unseasonably warm Gulf Stream just offshore, to provide the necessary temperature contrast.