For today's blog posting, I decided to research the temperature and level of Lake Superior. Currently, the Lake Superior level is about 25 cm (10 inches) below its long-term average beginning-of-April level, and is 12 cm (five inches) higher than the level recorded a year ago. 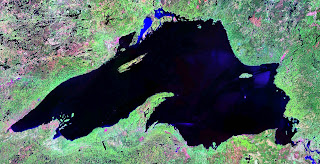 This past month the level of Lake Superior rose six cm (two inches), while on average it falls one cm (zero inches) in March.

While researching temperature, I found an article about the change in ice cover during the past few decades. Ice cover on North America’s Great Lakes–Superior, Michigan, Huron, Ontario, and Erie–has declined 71% since 1973, says a new study published in the Journal of Climate by researchers at NOAA’s Great Lakes Environmental Research Laboratory. 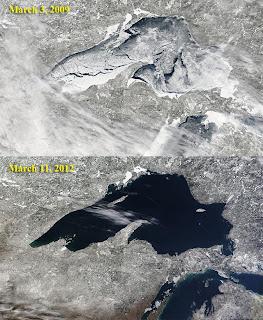 During the same period, Lake Michigan warmed by about 3.3°F (1.7°C), Lake Huron by 4.3°F (2.4°C), and Lake Erie showed almost no warming. The amount of warming of the waters in Lakes Superior, Huron, and Michigan is higher than one might expect, because of a process called the ice-albedo feedback: when ice melts, it exposes darker water, which absorbs more sunlight, warming the water, forcing even more ice to melt. This sort of vicious cycle is also responsible for the recent extreme loss of Arctic sea ice. The increase in temperature of the lakes could be due to a combination of global warming and natural cycles, the researchers said. They noted a pronounced 4-year and 8-year oscillation in ice coverage, which could be caused by the El Ninño/La Niña and Arctic Oscillation (AO), respectively.

Ice coverage on the Great Lakes was just 5% this past winter, the second lowest on record, behind 2002. The lack of Great Lakes ice this winter probably added a few degrees of warmth to the unprecedented “Summer in March” conditions observed in Michigan this year. The National Weather Service in Detroit called the warm March temperatures “perhaps the most anomalous weather event in Michigan since climate records began 130 years ago.” As a result of the lack of ice cover last winter combined with the warmer than usual spring, we can anticipate that areas surrounding the Great Lakes will see an increased incidence of warm spring weather due to decreased ice cover on the lakes. 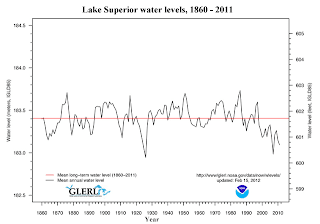 The loss of Great Lakes ice has allowed much more water to evaporate in winter, resulting in heavier lake effect snow near the shore, and lower lake levels. Lower water levels have had a significant impact on the Great Lakes economy. Over 200 million tons of cargo are shipped every year through the Great Lakes. Since 1998, when water levels took a severe drop, commercial ships were forced to light-load their vessels. For every inch of clearance that these oceangoing vessels lost because of low water levels, $11,000 – $22,000 in proﬁts were lost per day. Hydro power plants have also been affected by low water levels; several New York and Michigan plants were run at reduced capacity, forcing them to buy higher priced energy from other sources, and passing on the higher costs to consumers.

The large loss of ice is also likely to accelerate shoreline erosion because of the increase in open water, and promote more algal blooms. It is uncertain if the Great Lake water levels will continue to fall as the climate warms, since the region is expected to see an increase in precipitation over the coming decades. In Michigan, annual precipitation increased by about 14% between 1895 – 2011, according to the National Climatic Data Center.

Today's Keweenaw Peninsula Lake Superior Water Temperature is: 2.7 °C (37 °F). This is higher than the normal for today calculated between 1981-2005 -- which is 1.7°C (35°F ).  Lake Superior water temperature has been measured at buoys in the lake since the early 1980s. Such a time period is too short to put the data into an adequate historical context but the tendency of the 20+ year record is certainly upward. Records show that there has been a 4+ degree rise in the last 25 years.