While conducting research for the online rockhounding adventures, I came across a web page published by the New York State Museum. As they explain on their web page at http://www.nysm.nysed.gov/virtual/collections/splendor_in_stone/splendortour.html

The images in the tour are pictures of thin slices of rocks viewed through a polarizing microscope. The images beg the question: -What on Earth is that?- Is this where Science Intersects Art? At the same time they illustrate geologic processes strategically captured inside a wide range of rock types.

The main image comes first, then the black and white line drawing explaining some of the main features of the thin section, and then a short paragraph. 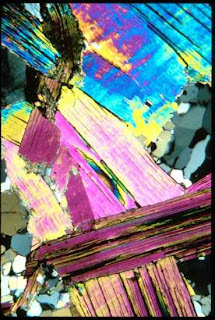 Colorful laths of phengite, a type of mica, sweep across this image. The speckled, almost iridescent, nature of the color -- known as bird's eye extinction -- is an identifying characteristic of all members of the mica family. Bird's eye extinction is an artifact caused by grinding the rock slice to make the thin section. The parallel lines within the crystals are traces of a nearly perfect single cleavage that is typical of micas. The cleavage planes are prominent here because you see the edges of the phengite plates, much as if you were looking end-on at the pages of a book. 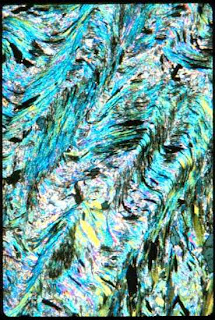 The ridges and valleys running from the upper right to the lower left of this photograph are little wrinkles called crenulations. These small folds of the planar fabric look like corrugated cardboard. The early fabric here is made up of plates of mica (muscovite and paragonite) and long, opaque ilmenite crystals. Find an ilmenite crystal that is bent around a crenulation. Straighten it out in your imagination and estimate how much this rock was shortened folding. 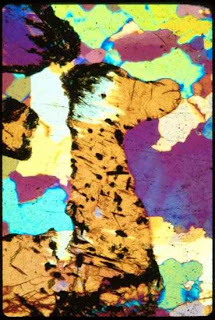 Cordierite and quartz are the two most abundant minerals in this rock. They grew together under high temperature and pressure that existed in the deep roots of the Appalachian mountains during the early stages of their formation. The orange giraffe is a cordierite crystal that is speckled with sillimanite needles and dark, grungy patches of sericite plus iron-oxide. The oxides, sericite, and sillimanite formed when the temperature dropped as the overlying high mountains were eroded away. 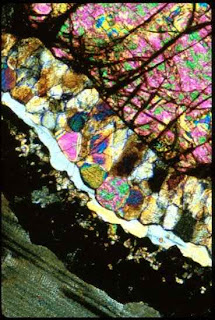 The original igneous rock, a gabbro, contained only olivine and feldspar. As pressure and temperature changed during metamorphism, the olivine and feldspar reacted to form layers of pyroxene and garnet. The pyroxene and garnet surround the olivine grains with coronas or halos of concentric rings. Here you see only part of a corona because of the high magnification. The feldspar at the bottom appears dark because it contains millions of tiny grains of spinel that replaced part of the feldspar as the corona formed. Reactions like this one occur very slowly. This corona was preserved when the rock became too cool for the reaction to continue. 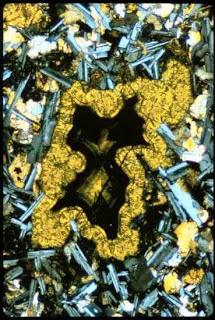 As this basalt from an ancient lava flow cooled and crystallized, it formed a mass of interlocking grains of gray feldspar, yellow and white pyroxene and black iron oxides. The gold and black shape is a pocket of volcanic glass, made from liquid left over after the feldspar and pyroxene crystals formed. Glass (even ordinary window glass) is actually a supercooled liquid, congealed but not yet crystalline. A bright fringe of radiating crystals too small to identify has begun to form around the edges of this glass. 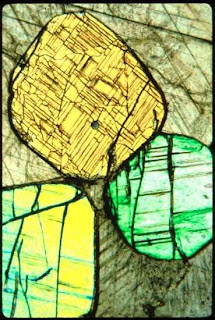 The rounded crystals are diopside, a member of the pyroxene family. They are surrounded by calcite. Notice the grid of lines in the upper crystal. These are the traces of cleavage planes viewed end-on; the nearly rectangular pattern they form is typical of pyroxenes and helps to identify them. You are looking at this crystal parallel to both cleavage planes; the same pattern does not appear in the two other diopside grains because they are oriented differently in the thin section. The different colors of the three diopside grains is also due to their difference in orientation. 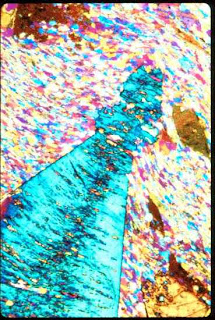 The large wedge-shaped crystal is staurolite. The surrounding rock is a mixture of fine-grained quartz and mica. You can see that the mica and quartz grains line up in parallel planes. This alignment, called foliation, formed in response to deformation of the rock. Inclusions of quartz and mica grains in the big staurolite crystal retain this foliation, showing that the staurolite grew after the rock was deformed. 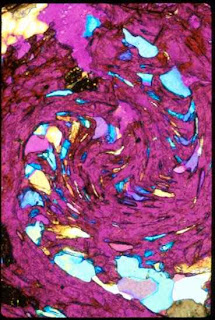 The large purple blob is garnet, a mineral common in metamorphosed shaly rocks known as pelitic schists. As garnets nucleate and grow, they can trap nearby grains. These inclusions commonly result in quite striking patterns. This particular garnet trapped a number of quartz crystals in smoothly curving spiral trails. The spiral configuration suggests that the garnet may have rotated as it grew. 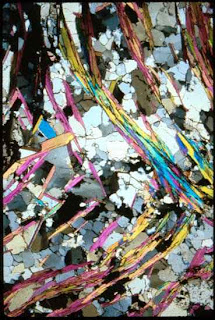 Micas, like the colorful muscovite in this photo, grow as flat plates. The mica plates tend to align themselves parallel to the direction of flow in a deforming rock, partly because they grow as the rock deforms. The planar fabric created by the parallel mica plates is called foliation or schistosity. Here you see the edges of the mica plates. Notice that there are two distinct foliations, almost at right angles to each other. This rock evidently had a life that involved at least two deformations. 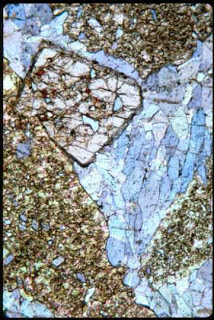 Blue is the natural color of glaucophane in plane-polarized light. You can see that individual crystals vary from blue to lavender to colorless depending on their orientation. The crystals have a zillion orientations in the three-dimensional world of the rock, but keep in mind that the thin section is only a two-dimensional slice. Plane polarized light interacts in specific ways with grains that are positioned differently to the light path. The slight color variations that result serve to identify glaucophane because only two other very rare minerals show comparable color. Rocks that contain abundant glaucophane are called blueschists.
Posted by Karen Brzys at 12:22 AM