We finally received some rain yesterday.  It rained off and on during the day, and then cleared up last night.  Today we are supposed to get a bit more rain this afternoon.  I started to think about the clouds and decided to do a blog update about clouds.

Clouds are made up of many millions of minuscule water droplets which are formed when moist warm air rises up into the sky and is then cooled down, causing the water droplets to condense.  If the cloud is very cold it is made up of ice crystals. It takes somewhere between a few minutes and one hour for a cloud to form.   Clouds can be made of either water or various chemicals that are suspended in the atmosphere above the surface of earth (or another planet).  When clouds get saturated, they loose moisture through precipitation.  In most cases precipitation falls to the earth's surface, except for virga which evaporate before the precipitation reaches the ground.  The picture below shows virga. 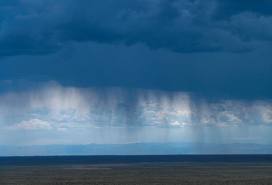 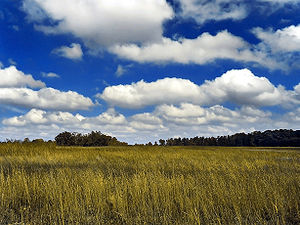 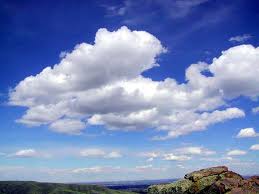 These clouds develop with noticeable vertical development and have clearly defined edges. Cumulus means "heap" or "pile" in Latin. These clouds develop when warm air rises and reaches a level of cool air.  The temperature difference causes the moisture in the air to condense. They are often described as "puffy" or "cotton-like" in appearance. Cumulus clouds may appear alone, in lines, or in clusters. When they are small and puffy, they indicate fair weather.  However, they can grow into cumulonimbus clouds, which may produce heavy rain, lightning, severe and strong winds, hail, and even tornadoes. The base of a cumulus cloud is usually below 2,000 m (below 6,500 ft), but may be higher (mid-level altitude) during conditions of very low relative humidity. The height of the tops of cumulus clouds vary. 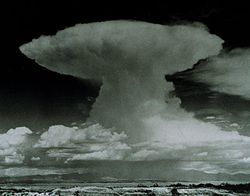 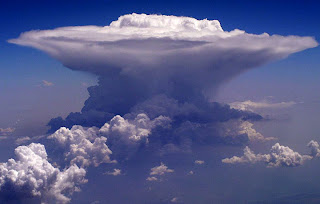 Nimbus clouds are those that produce precipitation.  Since nimbus clouds are dense with water, they appear darker than other clouds. These clouds often have a towering vertical formation that is very tall, and dense.  They form during inclement weather and often spawn thunderstorms.  The most typical nimbus cloud is a cumulonimbus. These clouds result from atmospheric instability.  They can form alone, in clusters, or along a cold front or squall line.  They often produce lighting and other severe weather, and can further develop into a super cell.  The base of a cumulonimbus can be several miles across, and it can be tall enough to occupy middle as well as low altitudes.  They usually start developing at an altitude of about 500 to 13,000 feet (150 to 3,960 metres), but can reach up to 75,000 feet (23,000 metres).  Typically,  cumulonimbus clouds peak at a much lower height, usually up to 20,000 feet (6,090 meters).  Well-developed cumulonimbus clouds are also characterized by a flat, anvil-like top caused by straight line winds at the higher altitudes which shear off the top of the cloud.  Cumulonimbus storm cells can produce heavy rain and flash flooding, as well as straight-line winds.  Most storm cells die after about 20 minutes, when the precipitation creates more downdraft than updraft, causing the energy to dissipate. 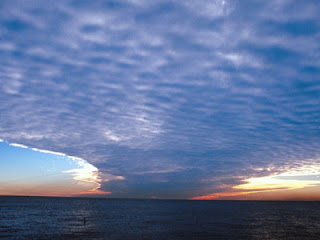 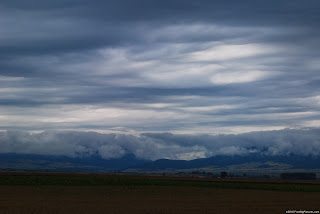 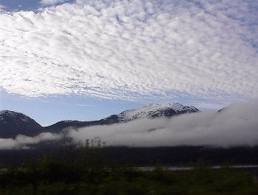 These clouds are characterized by horizontal layering with a uniform base, as opposed to convective clouds that are as tall or taller than wide.  More specifically, the term stratus is used to describe flat, hazy, featureless clouds of low altitude varying in color from dark gray to nearly white. Stratus clouds may produce a light drizzle or snow. A "cloudy day" usually features a sky filled with stratus clouds obscuring the sun. These clouds are essentially above-ground fog formed either through the lifting of morning fog or when cold air moves at low altitudes over a region.  They have bases that are below 2,000 m (6,000 ft). 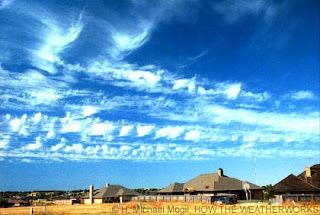 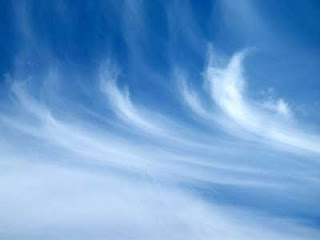 These clouds are characterized by thin, wispy strands, giving them their name from the Latin word cirrus meaning a ringlet or curling lock of hair.  Cirrus clouds generally appear white or light grey in color. They form when water vapor undergoes deposition at altitudes above 5,000 m (16,500 ft) in temperate regions and above 6,100 m (20,000 ft) in tropical regions.  Since these cirrus clouds arrive in advance of a frontal system, they indicate that the weather conditions may soon deteriorate. Jet-stream powered cirrus clouds can grow long enough to stretch across continents, but they remain only a few kilometers deep. When visible light interacts with the ice crystals in cirrus clouds, it produces optical phenomena such as sun dogs and halos (see photos below).  Cirrus clouds form on other planets, including Mars, Jupiter, Saturn, Uranus, and possibly Neptune, as well as Titan, one of Saturn's moons.   Some of these extraterrestrial cirrus clouds are composed of ammonia or methane ice rather than water ice. 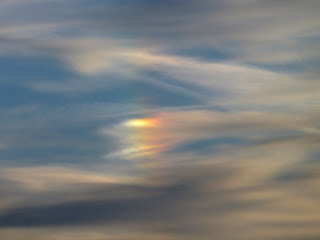 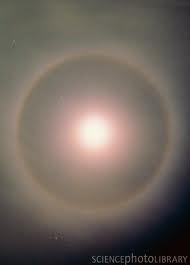 Clouds are also described by how far above the ground the base of the cloud forms:
Strato- for low clouds that show stratiform characteristics
Nimbo- for thick stratiform clouds that can produce moderate to heavy precipitation
Alto- for middle clouds
Cirro- for high clouds

When you combine the type of cloud and the height above the ground where they form, there are ten different classifications.  Clouds form both vertically and horizontally to make these ten types.

Cool Cloud Pictures
Here are some great cloud pictures that I borrowed from the Internet. 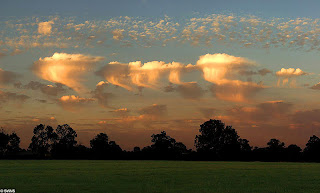 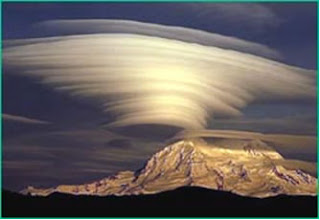 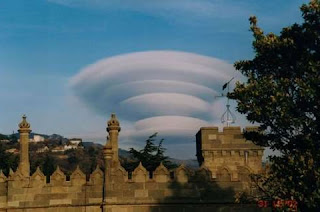 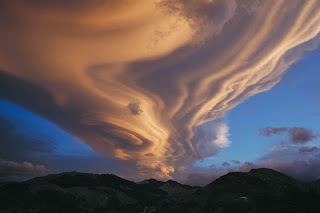 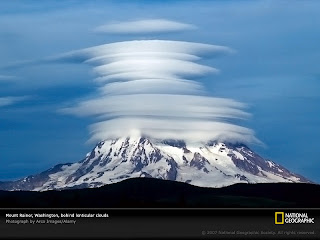 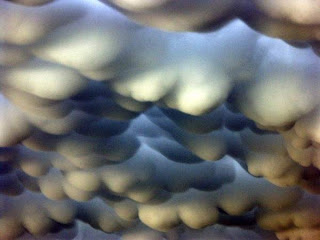 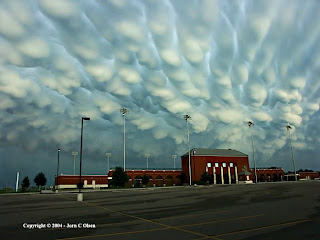 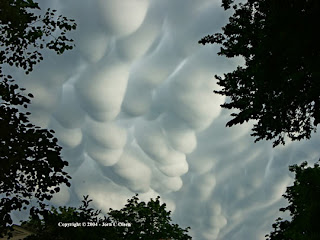 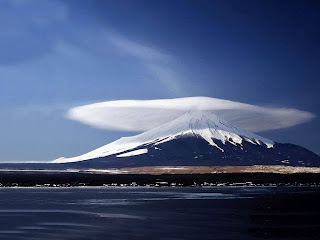 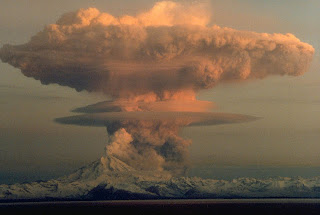 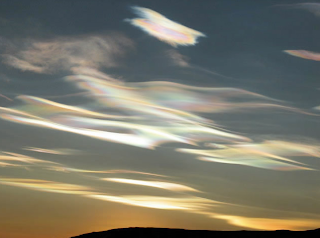 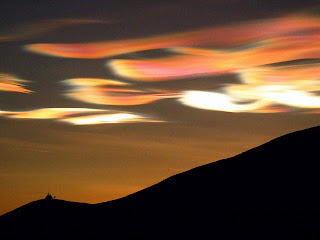 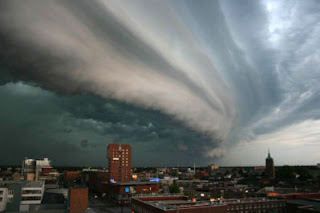 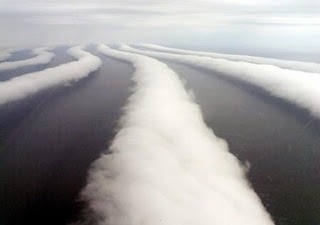