I did not get out to hike yesterday. It rained most of the day with temperatures starting in the 30s and then barely edging into the 40s. This is my least favorite weather in which to hike. The cooler temperatures and the rain have helped the crew fighting the Duck Lake fire, so I am not complaining. The few tourists in the area this weekend were not happy, though.

So for today's blog I decided to do an Internet search on new information regarding Lake Superior. I found this drawing of a cross section of Lake Superior in a 1975 article published by the US Geologic Survey.

Next I found an article published by the Minnesota Public Radio. In a previous blog update I described the phenomenon of upwelling in smaller inland lakes. This rarely happens in Lake Superior, but it can.

There have been reports that surface water temperatures on the western end of Lake Superior near Duluth had warmed into the low 50s -- and then plunged to 38 degrees off of Duluth Harbor. That's a 15 plus degree drop in less than 72 hours. What could have caused that?

It turns out it's a pretty common phenomenon when there is a sustained strong persistent northwest wind. The friction from the wind can blow the relatively warm water south and east toward Wisconsin. As the surface water moves east, cold water from the depths of Superior rises on the North Shore to take its place. This process is called upwelling. Since water is heaviest at precisely 39.2 degrees Fahrenheit, that cold water stays at the bottom of the lake until it is moved to the surface by some force. In this case it was wind. The process of replacing cold water from the depths with surface water is called lake turnover. It is common in inland lakes in the spring and fall. It also brings fresh oxygen rich waters from the surface to the depths where they can recharge plant and animal life. 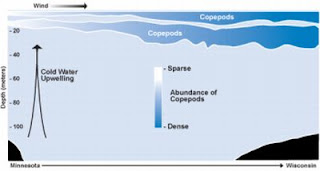 Next I decided to look up information about freighter traffic on Lake Superior. The principal cargoes shipped on the Great Lakes-St. Lawrence Seaway are iron ore and coal. Freighters carry iron ore mined in Minnesota and Michigan to steel mills in Illinois, Indiana, Michigan, and Ohio. A single Great Lakes freighter can carry enough iron ore to produce the steel needed to build 87,000 automobiles. The second largest cargo is coal, mined primarily in West Virginia, Kentucky, Pennsylvania, Ohio, and Illinois, and shipped to utilities and factories in the upper Great Lakes states and Canada. Great Lakes freighters also carry low-sulfur Western coal shipped initially by rail to Superior, Wisconsin. The U.S. fleet typically hauls millions of tons of cargo annually during a nine-month navigation season. The principal cargoes of foreign transporters are wheat, barley, corn, and other grains from the Midwest and Canada that are destined primarily for European markets.

I was hoping to find a current map showing the position of freighters on the Great Lakes, but apparently the Department of Homeland Security does not allow that information to be published. 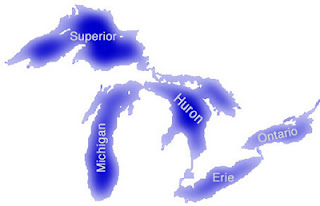 This massive, interconnected waterway has been an important trade route for more than three centuries. As early as 1660, French explorers were transporting furs by canoe from the upper reaches of Lake Superior to Quebec on the St. Lawrence River. In 1679, the explorer Sieur de La Salle built the Griffin, the first commercial vessel on the Great Lakes. Built and launched above the falls on the Niagara River, which connects Lake Ontario and Lake Erie, the Griffin was also the first ship to sail on the upper Great Lakes. 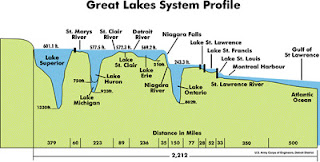 La Salle sailed the Griffin to Green Bay, then a French outpost on the western shores of Lake Michigan, where it was loaded with furs. The five-man crew of the Griffin then set out on the return trip, while La Salle headed south to explore the Illinois River. The Griffin never survived its maiden voyage, however, as it was apparently lost during a violent storm. Father Louis Hennepin, who sailed with La Salle, later wrote an account that suggested the Griffin foundered on Lake Dauphin, the French name for Lake Michigan. In 1890, a lighthouse keeper discovered seventeenth-century artifacts and four skeletons in a cave on Manitoulin Island in Lake Huron, but the Griffin and the chest of gold coins it reportedly carried were never found.