While hiking with Jamey and Lois last Sunday, we spotted this tree that had been hit by lightning. 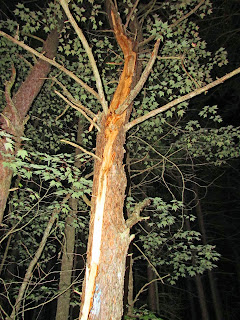 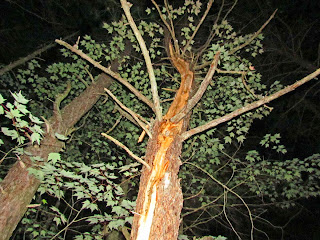 Notice the singe marks that show the direct path of the lightning strike.  The rest of the bark removal happened due to the extreme heat boiling the sap, which exploded out of the tree ripping the bark right off the tree. 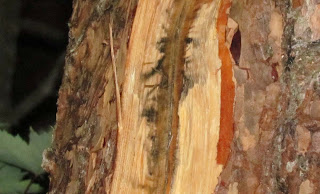 Lightning is a massive electrostatic discharge between electrically charged regions within a single cloud, between clouds, or between a cloud and the Earth's surface. The charged regions equalize themselves through a lightning strike.  Although lightning is always accompanied by the sound of thunder, distant lightning may be seen but be too far away for the thunder to be heard.  At night, it is possible to see the flashes of lightning from very far distances, up to 100 miles, but the sound doesn't carry that far. 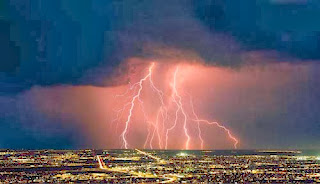 On a world-wide basis, there are approximately 40–50 lightning strikes a second, resulting in nearly 1.4 billion flashes per year.  Many factors affect the frequency, distribution, strength, and physical properties of a "typical" lightning flash to a particular region of the world. These factors include ground elevation, latitude, prevailing wind currents, relative humidity, proximity to warm and cold bodies of water, etc.   A typical thunderstorm has three or more strikes to the Earth per minute at its peak.  The diagram below shows the relative number of lightning strikes around the planet.  About 70% of all lightning on Earth happens in the tropics where atmospheric convection is the greatest. 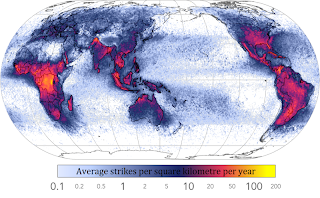 Although scientists have been studying lightning for hundreds of years, we still don't have a complete understanding of how or when a lightning strike will occur. We do know that lightning primarily occurs when warm air is mixed with colder air masses.  However, lightning also occurs during dust storms, forest fires, tornadoes, volcanic eruptions, and even in the cold of winter, where the lightning is known as thunder snow.  Hurricanes typically generate significant lightning.

How about this picture of lightning recently taken over the Grand Canon. 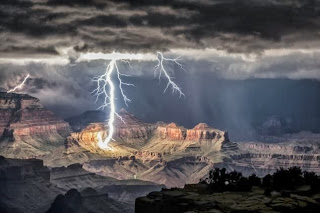 Each strike of lightning can reach more than five miles in length, and produce temperatures greater than 50,000 degrees Fahrenheit and an electrical charge of 100 million volts. At any given moment, there are 1,800 thunderstorms in progress somewhere across the earth. Lightning detection systems in the United States sense an average of 25 million lightning strikes per year. 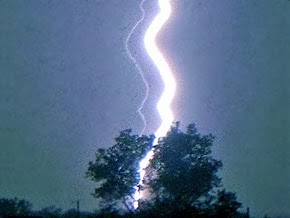 Trees occupy a particularly susceptible position in the landscape, since they are often the tallest objects. Tall trees are the most vulnerable, especially those growing alone in open areas such as on hills, in pastures or near water. 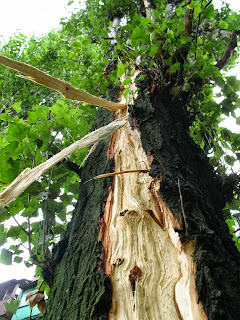 A tree’s biological functions and/or structural integrity are affected by lightning strikes. Along the path of the strike, sap boils, steam is generated and cells explode in the wood, leading to strips of wood and bark peeling or being blown off the tree. If only one side of the tree shows evidence of a lightning strike, the chances of the tree surviving and eventually closing the wound are good. However, when the strike completely passes through the tree trunk, with splintered bark and exploded wood on each side, trees are usually killed.