Difference between Prehnite and Thomsonite

While I was working my booth during the Rock On show last weekend, I looked at a lot of rocks.  For what ever reason, more people bring rocks to that show for us dealers/experts to identify than at any other show.

One person brought a rock she found in the Keweenaw Peninsula.  She showed it to eight of us dealers.  Half said it was prehnite and half said it was thomsonite.

So this blog posting is for all the rockhounds who have wondered about the difference between prehnite and thomsonite.

Thomsonite is the name of a series of silicate minerals of the zeolite group. Zeolites are microporous minerals that commonly adsorb water.  Below is a diagram of the porous structure. 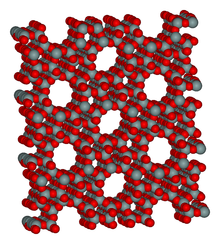 The term zeolite was originally coined in 1756 by a Swedish mineralogist (Axel Fredrik Cronstedt), who observed that upon rapidly heating a zeolite, it produced large amounts of steam from water that had been adsorbed by the rock. Based on this, he called the material zeolite, from the Greek words meaning "to boil" and "stone".

Here are a couple of pictures of thomsonites found in Minnesota. 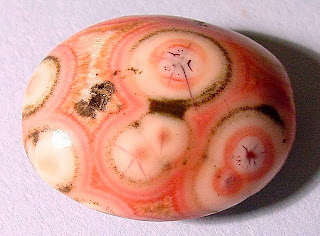 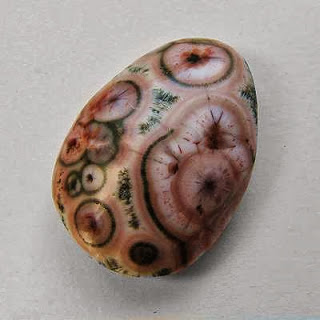 Thomsonite was first identified in material from Scotland in 1820. It is named for the Scottish chemist Thomas Thomson. The Mohs hardness is 5 to 5.5. It is transparent to translucent and has a density of 2.3 to 2.4. It may be colorless, white, beige, or somewhat green, yellow, or red. The crystals tend to be long thin blades that typically form radial aggregates, and sometimes fans and tufts. The aggregates are variable and may be spikey in appearance, dense and ball-like, or form worm-like growths. Tight acicular radiating clusters and sphericules are common forms.  Thomsonite is pyroelectric, meaning it can generate an electrical charge when heated. 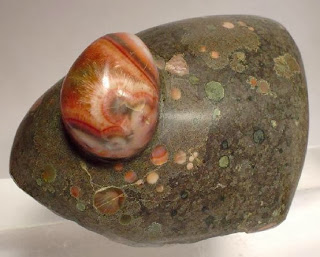 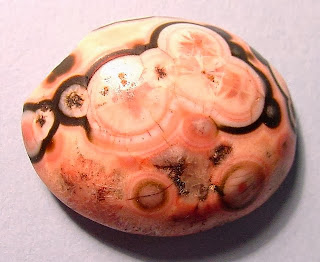 Thomsonites, one of the rarer zeolite minerals, have been collected as gemstones from a series of lava flows along Lake Superior in Minnesota and to a lesser degree in the Keweenaw Peninsula of Michigan. Thomsonite nodules can be found still embedded in basaltic matrix rock, or loose along the shoreline in areas where they have eroded from the basalt. Some nodules have copper inclusions and rarely will be found with copper "eyes." When polished thomsonites sometimes (not always)display a "cat's eye" effect (chatoyancy). It's luster is pearly to subvitreous. 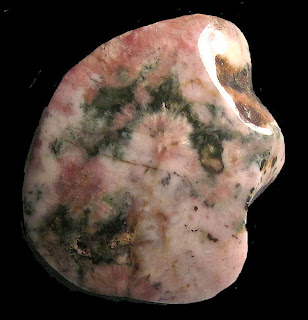 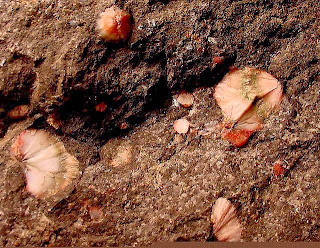 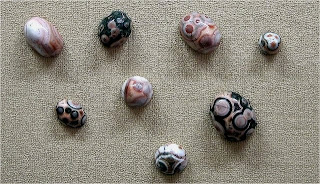 In addition to the Lake Superior area, thomsonites have been found in Faroe Islands, Scotland, Colorado, New Jersey, Oregon, Nova Scotia, India, and Russia. Most of these thomsonite nodules are less than 0.6 cm (1/4 inch). Those enclosed in basalt are extremely difficult to remove without breaking them. Consequently, a very large percentage of those used as gemstones have been, and continue to be, pebbles collected from beaches.

Prehnite is a phyllosilicate of calcium and aluminium.  Prehnite is an abundant secondary mineral found in basaltic matrix rocks on Isle Royale, in the Keweenaw Peninsula,  and elsewhere in the Lake Superior region. It occurs as amygdule fillings, crosscutting veins, and as a replacement of earlier minerals or rock. Though not a zeolite, it is found associated with minerals such as thomsonite as well as with datolite, calcite, and other minerals.   It is the first mineral to be named after someone.  It was named for its discoverer: Dutch mineralogist, Colonel Hendrik Von Prehn.   Pictures of Prehnite are below. 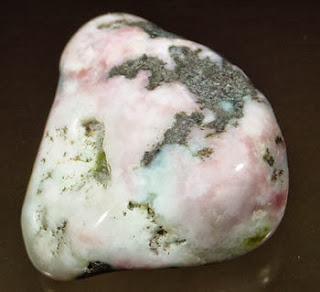 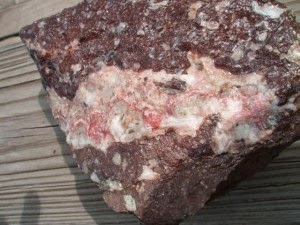 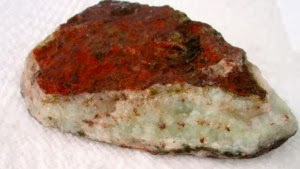 So how do you tell the difference between the two?  According to R.V. Dietrich on his website http://stoneplus.cst.cmich.edu/thomsonite.htm, it is very difficult to tell the difference.  He examined 100 specimens supplied to him by the Michigan Mineralogical Society -- and found that nearly 60 percent of them had been misidentified and were instead prehnite.  He says that you have to use either a petrographic microscope or an x-ray diffractometer to distinguish  prehnite from thomsonite.

According to the webpage  http://www.snobappealjewelry.com/blog/tag/prehnite/ most of what people refer to as thomsonite from the Upper Peninsula is really copper-bearing prehnite, or what is sometimes referred to as patricianite.  They suggest that any thomsonite-like specimens that contain specks of copper are most likely is prehnite. The inclusions in the prehnite are endless and create lovely pastel colors. Often “eyes” are present as are variegated type feathery patterns. Many people refer to these gemstones as U.P. Thomsonite.  A few photos are below. 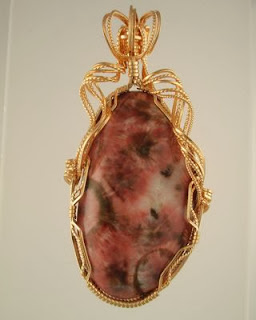 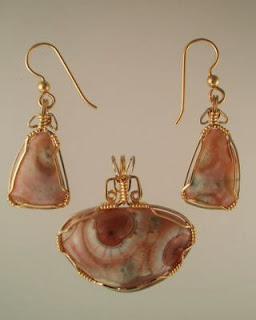 Another web page  http://www.minsocam.org/MSA/collectors_corner/usgs/b1309.htm confirms what the previous web page suggests.   Most of the prehnite has a characteristic pale-green to white color, but that in amygdules is commonly light to dark pink or variously mottled in pink and green. The pink prehnite superficially resembles thomsonite, with which it has commonly been confused: most of the so-called thomsonite from Isle Royale is actually pink prehnite, including material from Thomsonite Beach on the north side of the island.  Some of the specimens from the Keweenaw Peninsula have a radiating fibrous habit, with the occasional development of "eyes," that has probably been a factor in their confusion with thomsonite. The pink color of the prehnite is due to internal reflections from finely disseminated native copper inclusions, and the color intensity is related to the distribution, abundance, and grain size of the inclusions.

So I guess we were all correct to a degree since the prehnite specimens found in the Keweenaw is also called "U.P. thomsonite."   Since I was one of the people who identified the specimen as thomsonite -- I would like to congratulate Jeff Anderson and the others who correctly identified as prehnite.