For today's blog posting I decided to check in with the Mars rover, Curiosity.  The first photo below shows the scene on Mars that the rover is seeing right now.  NASA's Mars rover Curiosity used the Navigation Camera (Navcam) on its mast to record this westward look on the 347th Martian day, or sol, of the rover's work on Mars (July 28, 2013). The rover had completed a southwestward drive of 60.1 meters on that sol.

The prominent rock in the right foreground, informally named "East Bull Rock," is about 20 inches (half a meter) high. The rock-studded local rise dominating the image is called "Elsie Mountain." A distant portion of the rim of Gale Crater is visible in the upper portion of the view.

Here is another photo of the Martian surface.  This scene combines seven images from the telephoto-lens camera on the right side of the Mast Camera. The component images were taken on July 24, 2013. That was shortly before Curiosity's Sol 343 drive of 111 feet (33.7 meters). The rover had driven 205 feet (62.4 meters) on Sol 342 to arrive at the location providing this vista. The center of the scene is toward the southwest.

A rise topped by two gray rocks near the center of the scene is informally named "Twin Cairns Island." It is about 100 feet (30 meters) from Curiosity's position. The two gray rocks, combined, are about 10 feet (3 meters) wide, as seen from this angle.

This mosaic has been white-balanced to show what the scene would look like under Earth lighting conditions, which is helpful in distinguishing and recognizing materials in the rocks and soil.
﻿

The total distance driven by NASA's Mars rover Curiosity passed the one-mile mark a few days before the first anniversary of the rover's landing on Mars.

The mapped area is within Gale Crater and north of the mountain called Mount Sharp in the middle of the crater. After the first use of the drill, the rover's main science destination will be on the lower reaches of Mount Sharp. ﻿ 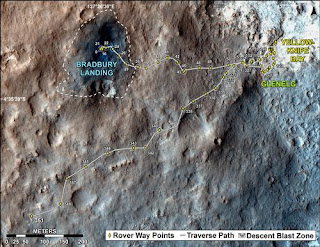 The next photo below shows the view of the two moons of Mars taken by NASA's Mars rover Curiosity as the larger moon, Phobos, passed in front of the smaller one, Deimos, from Curiosity's perspective, on Aug. 1, 2013.

Curiosity used the telephoto-lens camera to catch a series of images of the moons before, during and after the occultation of Deimos by Phobos. This processed image stacks information from several images of each moon to enhance the visibility of smaller features. The two moons' position relative to each other is taken from one of the frames from just before the occultation.

On Phobos, Stickney Crater is visible on the bottom. It is on the leading hemisphere of Phobos. Hall Crater, in the south, is the prominent feature on the right hand side. 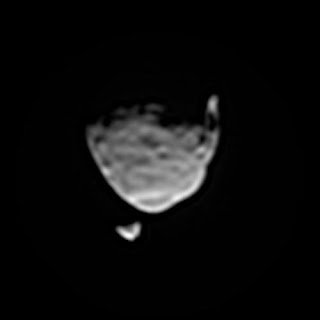 The set of three images below shows views three seconds apart as the larger of Mars' two moons, Phobos, passed directly in front of the sun as seen by NASA's Mars rover Curiosity. Curiosity photographed this annular, or ring, eclipse with the telephoto-lens camera  on Aug. 20, 2013, the 369th Martian day, or sol, of Curiosity's work on Mars.

Curiosity paused during its drive that sol for a set of observations that the camera team carefully calculated to record this celestial event. The rover's observations of Phobos help make researchers' knowledge of the moon's orbit even more precise. Because this eclipse occurred near mid-day at Curiosity's location on Mars, Phobos was nearly overhead, closer to the rover than it would have been earlier in the morning or later in the afternoon. This timing made Phobos' silhouette larger against the sun -- as close to a total eclipse of the sun as is possible from Mars.