Yesterday was yet another weird weather day in Grand Marais.  During the winter we get lake effect snow, but yesterday we had lake effect rain.  All day long there were periods of rain intermixed with sun, as rain clouds developed and rolled intermittently to shore.  In between, there were several rainbows that formed.  First, the photos I took from my yard. 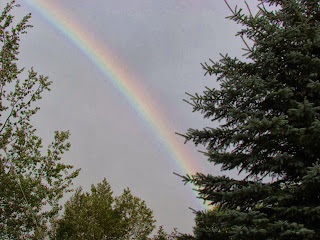 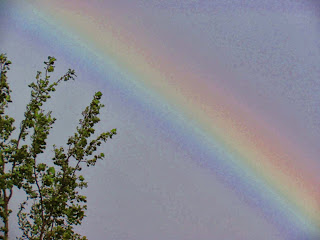 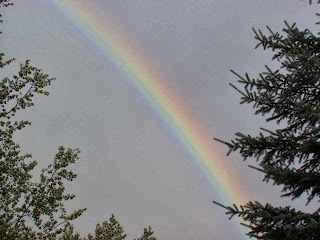 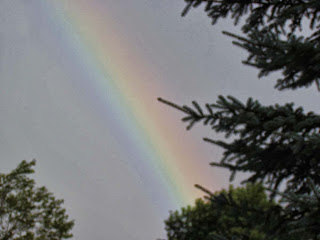 I decided to use Photoshop to play with the saturation... 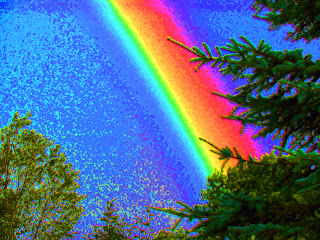 A rainbow is an optical and meteorological phenomenon that is caused by reflection of light in water droplets in the Earth's atmosphere, resulting in a spectrum of light appearing in the sky. It takes the form of a multicolored arc. The classical Greek scholar Aristotle (384–322 BC) was first to devote serious attention to the rainbow.  The remainder of photos and diagrams in this posting were taken from the internet. 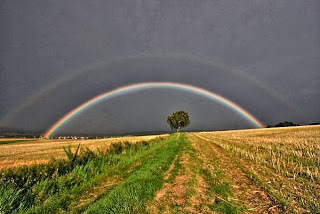 Rainbows caused by sunlight always appear in the section of sky directly opposite the sun.
In a "primary rainbow", the arc shows red on the outer part and violet on the inner side. This rainbow is caused by light being refracted while entering a droplet of water, then reflected inside on the back of the droplet and refracted again when leaving it. 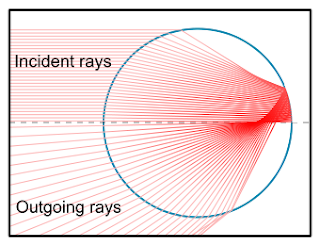 In a double rainbow, a second arc is seen outside the primary arc, and has the order of its colors reversed, red facing toward the other one, in both rainbows. This second rainbow is caused by light reflecting twice inside water droplets.

The rainbow is not located at a specific distance, but comes from any water droplets viewed from a certain angle relative to the sun's rays. Thus, a rainbow is not an object, and cannot be physically approached. Indeed, it is impossible for an observer to see a rainbow from water droplets at any angle other than the customary one of 42 degrees from the direction opposite the sun. Even if an observer sees another observer who seems "under" or "at the end of" a rainbow, the second observer will see a different rainbow—further off—at the same angle as seen by the first observer. 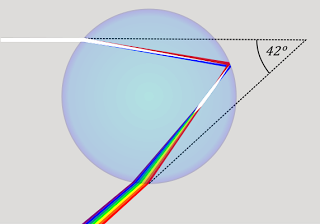 Rainbows can be caused by many forms of airborne water. These include not only rain, but also mist, spray, and airborne dew.