Checking in with the Mars Rover Curiosity

My knee and ankle are feeling a bit better, but the knee requires a bit more rest before I try to get out hiking again.  So for today's blog posting I decided to check in with the Mars rover, Curiosity.  Curiosity was launched from Cape Canaveral on November 26, 2011 and landed on Mars August 6, 2012.  So for over three years this car-size roving robot has been exploring the surface of Mars, conducting scientific experiments, and sending incredible photos back to Earth.  The photos and information included in this post are from the NASA webpage http://mars.nasa.gov/msl/multimedia/images/. 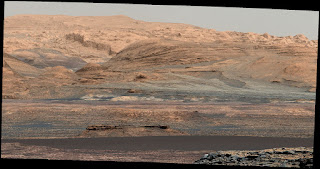 The dark band in the lower portion of the Martian scene shown above is part of the "Bagnold Dunes" dune field lining the northwestern edge of Mount Sharp, inside Gale Crater.

The view combines multiple images taken  on Sept. 25, 2015, during the 1,115th Martian day, or sol, of Curiosity's work on Mars. Curiosity will visit examples of the Bagnold Dunes on the rover's route to higher layers of Mount Sharp. The informal name for the dune field is a tribute to British military engineer Ralph Bagnold (1896-1990), a pioneer in the study of how winds move sand particles of dunes on Earth. 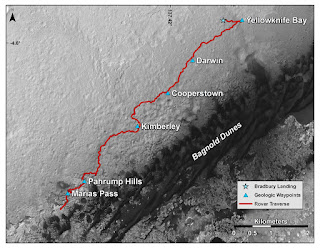 The map above shows the path that Curiosity has taken.  The scale bar at lower right represents two kilometers (1.2 miles).

Shown above are the prominent mineral veins at the "Garden City" site examined by NASA's Curiosity Mars rover vary in thickness and brightness. 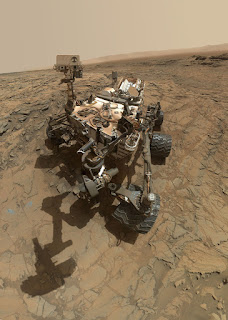 This self-portrait of NASA's Curiosity Mars rover shows the vehicle at the "Big Sky" site, where its drill collected the mission's fifth taste of Mount Sharp.  For scale, the rover's wheels are 20 inches (50 centimeters) in diameter and about 16 inches (40 centimeters) wide. The drilled hole in the rock, appearing grey near the lower left corner of the image, is 0.63 inch (1.6 centimeters) in diameter.

A view from the "Kimberley" formation on Mars taken by NASA's Curiosity rover. The strata in the foreground dip towards the base of Mount Sharp, indicating flow of water toward a basin that existed before the larger bulk of the mountain formed.

The colors are adjusted so that rocks look approximately as they would if they were on Earth, to help geologists interpret the rocks. This "white balancing" to adjust for the lighting on Mars overly compensates for the absence of blue on Mars, making the sky appear light blue and sometimes giving dark, black rocks a blue cast.