All About Evergreen Ferns 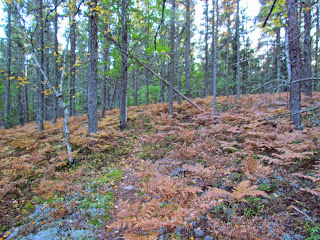 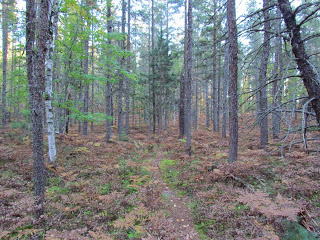 First:  here is some basic information.  Ferns are a very ancient family of plants that evolved during the Mesozoic era, 360 million years ago. They are older than land animals, far older than dinosaurs, and thrived on Earth two hundred million years before flowering plants. 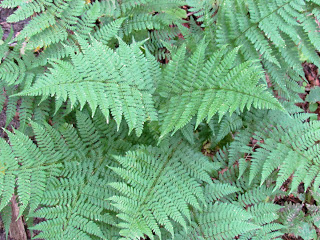 Most fern species are leafy plants that grow in moist areas under a forest canopy. They are "vascular plants" with well-developed internal vein structures that facilitate the flow of water and nutrients throughout the plant. Ferns reproduce in a manner that is different than other vascular plants.  Ferns reproduce from spores or an intermediate developmental stage called a gametophyte, while flowering plants and conifers reproduce from seeds. 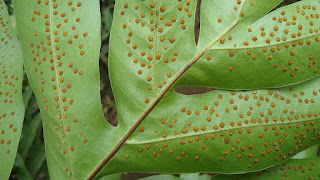 So what exactly is different about this method of reproduction?  Flowering plants (and conifers) reproduce when pollen from a male flower fertilizes the female flower.  The male pollen cell with half the genetic material of the adult plant fuses with that of the female cell, which carries the other half. The complete, fertilized cell grows into the seed, which then grows into the adult plant.


Ferns reproduce in a completely different manner that requires there to be a moist, wet environment.  The leafy branch of the fern is called a frond. The small leaflets that make up the frond are called pinnae.  On the bottom of some fern fronds there are small pockets of pores.   When these spores are released and when they find a suitable moist condition, it will grow into a tiny heart-shaped plantlet called a gametophyte. This plantlet is not a full adult fern, but instead only contains half the genetic material.  It is an intermediate stage between a spore and the adult fern. 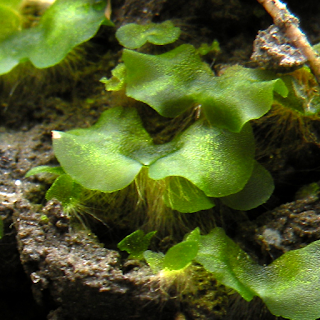 Ferns can also avoid the whole genetic reproduction process and grow directly from spreading rhizomes (roots) of existing plants. Brackens often spread this way. Some species of ferns can sprout baby ferns from the tips of their fronds. 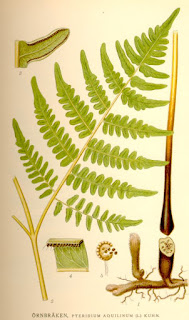 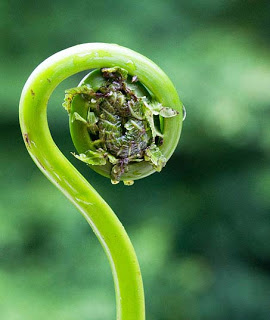 So why do some fern species stay green during the winter?  The simple answer  is that evergreen ferns want to maximize the amount of time they can conduct photosynthesis.  By staying green in the fall after the leaves on the canopy trees fall to the ground, the ferns get significant sunlight.  If the fronds stay green under the snow, when the snow melts in the spring the plants get a jump-start on photosynthesis before the trees in the canopy leaf out for another summer. 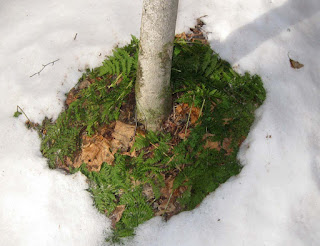 Because evergreen fern fronds stay green throughout the winter, they have had to evolve to withstand cold temperatures and the increased likelihood of predation by winter-starved animals. To avoid being eaten, some ferns give off noxious fumes to deter predators.  The fronds survive freezing temperatures because they make their own antifreeze. As the days shorten in the fall, evergreen ferns begin to store sugar in their fronds . The sugar serves as antifreeze, protecting the leaves as temperatures fall 5 to 10 degrees below freezing. When the temperature drops still further, the plants resort to the same method used by insects that survive in deep cold: stopping the formation of ice crystals in their tracks.  These ferns, and other evergreen plants, stop the growth of ice crystals by synthesizing antifreeze proteins that bond to the ice crystals that form first and block the bonding of other ice crystals. This self-preservation mechanism will protect the fern down to around -20ºF. When the ambient temperature stays below -20ºF for many weeks, the ferns will freeze solid, but will still survive. They withstand this temperature extreme by evacuating all the water from their cells, insuring that, when ice crystals do form, they end up outside the cell walls, preventing the cells from rupturing. 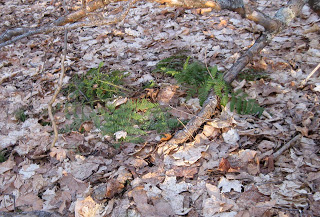 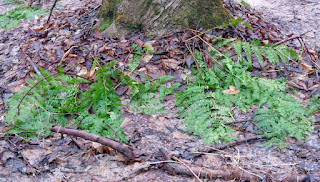 From what I can tell, I believe the evergreen fern I photographed the other day near the Log Slide is Dryopteris carthusiana, spinulose woodfern. 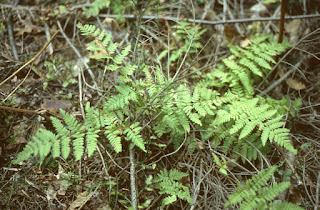