NASA Photos of Earth From Space

The last two days it has been raining and cold with temperatures in the 30s.  This is my least favorite weather, so we didn't get out to exercise.  Today it is still chilly and there is a dusting of snow -- but the sun is out and temperatures are supposed to rise to the 40s.  So we will definitely get out to enjoy the sunshine!

For today's blog posting I checked in with NASA's Home Observatory webpage at http://earthobservatory.nasa.gov/. 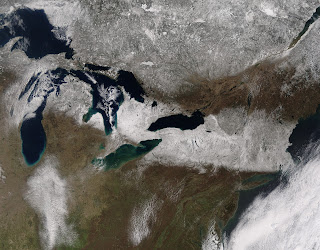 On April 5th Spring arrived in the United States, but that did not stop a winter storm from dumping several inches of snow across much of the Upper Midwest and the Northeast. 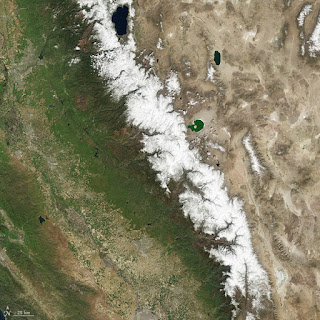 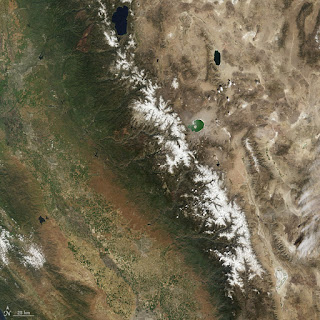 
One year after snow surveyors stood on a dusty mountainside in California and reported that snow-water content was just 5 percent of normal (bottom photo above), the situation in the Sierra Nevada range is much improved (top photo above). But it is still not normal.

The California Department of Water Resources (DWR) reported on March 30, 2016, that snow cover in the mountains was 87 percent of the long-term average. Snow that falls in the mountains is often powdery and dry at first, but as the winter progresses and the snow compacts, the water becomes concentrated. The rule of thumb is that 30 inches (76 centimeters) of snow in the Sierra Nevada range is equal to roughly 12 inches (30 centimeters) of fresh water once it melts.

As of March 30, the statewide average snow-water equivalent (SWE) was 24.4 inches. There were some regional differences, with 28.1 inches of SWE (97 percent) in the northern Sierra Nevada; 25.2 inches (88 percent) in the central region; and 19.3 inches (72 percent) in the southern region. 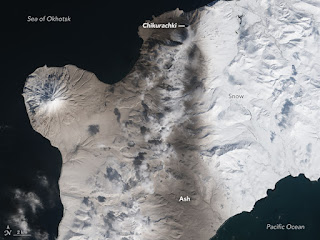 
n March 2016, ash poured from a stratovolcano in the Kuril Islands. After a year of inactivity, Chikurachki erupted explosively on March 29, 2016, sending ash to heights of about 3 to 4 kilometers (2 miles). Noting that ash explosions up to 10 kilometers could occur at any time, volcano monitoring agencies posted a code orange aviation alert.


Chikurachki rises 1,816 meters (5,956 feet) above the western Pacific Ocean on Paramushir Island, just south of the Kamchatka peninsula. It is made up of alternating layers of hardened lava, ash, and rock, and it is one of the more restless volcanoes in the tectonically active area. 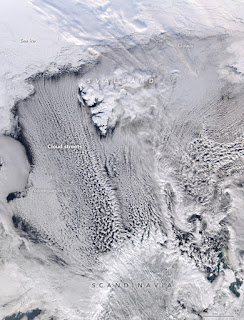 
On March 17, 2016, NASA’s Aqua satellite acquired this natural-color image of cloud streets over the Norwegian Sea.

Cloud streets are long, parallel bands of cumulus clouds that form when cold air blows over warmer waters. On this day, an outbreak of cool air moved southward across Arctic sea ice toward northern Scandinavia. The difference in temperature between the sea surface and the air in this area can be well over 10 degrees Celsius (18 degrees Fahrenheit).

To transport the heat away from the sea surface, columns of heated air called thermals naturally rise through the atmosphere. The air masses rise until they hit a warmer air layer (temperature inversion), which acts like a lid. The rising thermals then roll over and loop back on themselves, creating parallel cylinders of rotating air. On the upper edge of these cylinders of rising air, clouds form. Along the downward side (descending air), skies are clear.

“The cloud streets are just the manifestation of nature trying to get rid of energy imbalances,” said Erik Kolstad, a weather and climate scientist at Uni Research and the Bjerknes Center for Climate Research in Bergen, Norway. “This is also what happens in tropical cyclones, which suck up heat from the warm ocean surface and transport it far away.”

The cold air outbreak in mid-March spurred the formation of more than just cloud streets; it also led to vortices southeast of Svalbard, over the Barents Sea. Kolstad notes that these “comma clouds” occur when warm, humid air starts to wrap counterclockwise around the cold air. When these air masses are lifted, clouds are formed. Comma clouds are the first sign that a small-scale low-pressure system (polar low) is forming. Given the right conditions—cool air aloft and the absence of a lid-like inversion—polar lows can grow into very fierce (though small-scale) cyclones.

“Cloud streets and polar lows are very common over the Norwegian Sea from October to April,“ Kolstad said. “March seems to be a month with a high frequency of this phenomenon.”

That corresponds to the time of year when there is ample Arctic sea ice to cool the air. The edge the sea ice pack in the Arctic Ocean is visible near the top of this image. Sea ice grows each year throughout the fall and winter and reaches its maximum extent sometime between February and April. On March 24, 2016, a week after this image was acquired, Arctic sea ice peaked at 14.52 million square kilometers (5.607 million square miles).
Overall, the 2015-2016 winter saw unusually few polar lows, and sea ice might have played a role. While there was more ice in March 2016 compared to other seasons throughout the year, the maximum extent was a record-low since the start of the satellite record in 1979.
“When there is little sea ice, there will be fewer cold air outbreaks,“ Kolstad said. “But this works both ways. Cold air outbreaks (northerly winds) are instrumental in transporting sea ice southwards, so a lack of cold air outbreaks also contributes to a lesser sea ice extent.”