For today's blog posting I checked in with NASA's Earth observatory web page at http://earthobservatory.nasa.gov/ to see what new images have been taken as of late.

The first NASA photos are of the land slide area in Oso, Washington.  The first image was taken before the landslide; the second after. 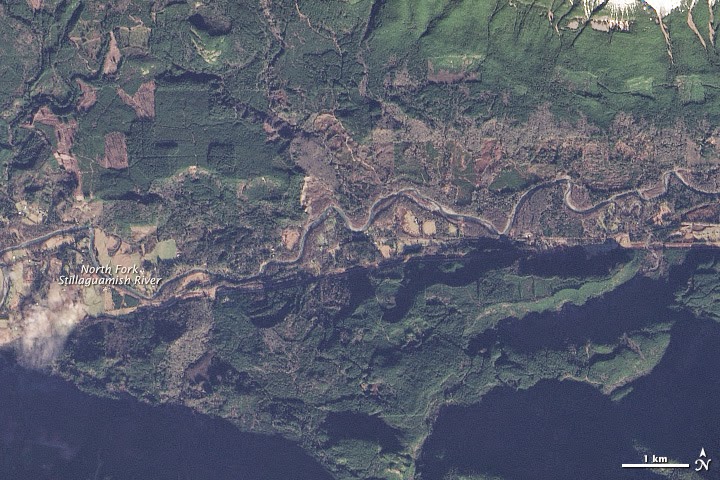 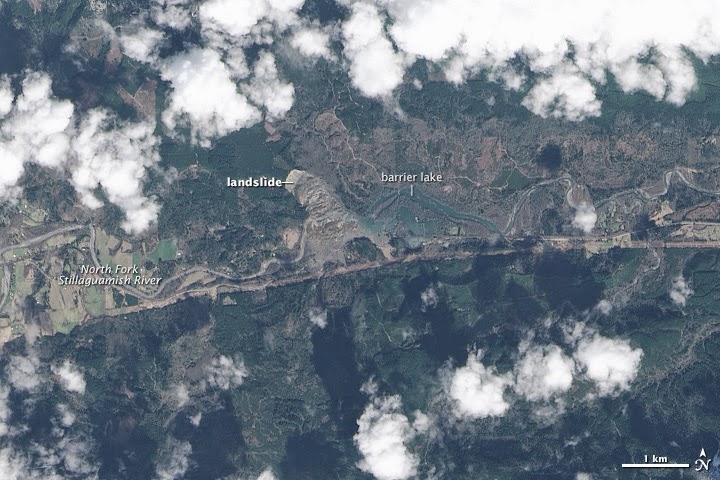 On March 22, 2014, the rainfall-triggered landslide sent muddy debris spilling across the North Fork of the Stillaguamish River. The debris swamped numerous homes, resulting in the deaths of at least 24 people, according to news reports. Dozens of people are still missing.  The landslide created an earthen dam that blocked the river, causing a barrier lake to form. The Operational Land Imager (OLI) on Landsat 8 acquired this image of landslide debris and the barrier lake on March 23, 2014. An image of the same area on January 18 is shown for comparison. As water backed up, local authorities expressed concerns about a potential flash flood. 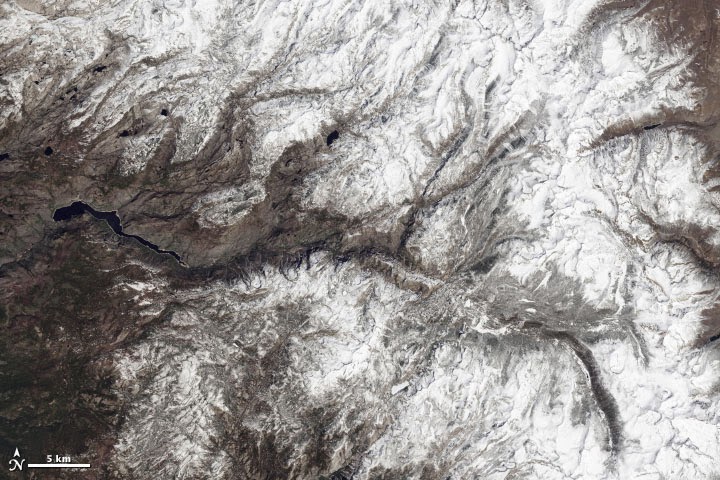 Now, the winter of 2014 has ended, and for the third consecutive year, mountain snow in California is in short supply. As of February 28, the snowpack was 22 percent of normal—insufficient to resupply reservoirs already low after 2013 ended as the driest year on record in parts of California. Though conditions are similar to 1991, this time San Francisco water managers have access to new tools that provide an unprecedented view of the snowpack during the critical spring melt. That tool helped them to navigate 2013 without running out of water, and it may come in handy for 2014 too.

NASA’s Airborne Snow Observatory (ASO) takes to the skies with this new technology. By measuring the amount of reflected light, scientists can track the amount of water available from snowmelt and melt patterns. The image above shows a snow water equivalent map of the Upper Tuolumne River watershed—the water supply for San Francisco and other Bay Area cities and industries—from an ASO flight. It is a calculation of how much water the snow contains based on snow depth and density. Dark areas indicate the deepest snow and most water. 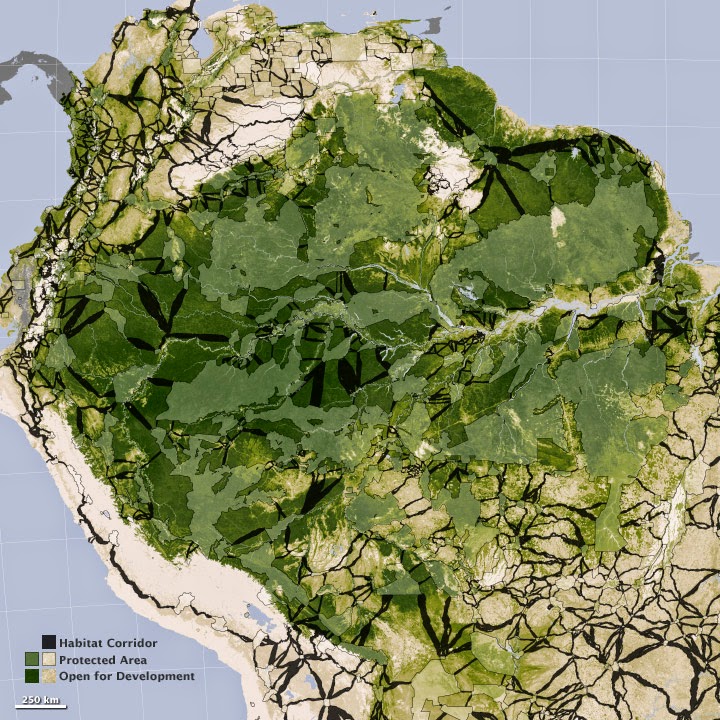 The numbers are staggering and often hard to absorb. Close to 25 million square kilometers (9.65 million square miles) of tropical forest are spread across 75 countries on three continents. The trees in those forests store 225 to 250 billion tons of carbon. Each year, vast tracts of those trees are lost to development and agriculture—about 90,000 square kilometers (35,000 square miles) annually from 2000 to 2012. This deforestation releases nearly a billion tons of carbon dioxide into the air, between 15 to 20 percent of global emissions.

For a decade, conservation groups and governments have been working to slow the destruction of tropical forests and curb the increase of carbon in the atmosphere. Through a United Nations program called Reducing Emissions from Deforestation and Forest Degradation (REDD+), negotiators strive to offset carbon emissions by industrialized nations and preserve forests in developing nations.

To study the spread of deforestation, scientists combine satellite data, ground-based surveys, and socioeconomic data to map a new way forward for tropical conservation. Tropical forests are believed to be home to as much as half of the world’s terrestrial species. They also contain some of the densest stocks of carbon, so a little bit of well-thought-out conservation can go a long way.

Their idea is to link existing forest and biosphere preserves with strategic corridors of densely vegetated (and carbon-rich) protected land. Emerging research suggests that even narrow corridors of undeveloped woodlands help the reproduction, genetic diversity, and survival of plant and animal species. Protected corridors also offer a safety valve for species that must move and adapt to climate change.


The map above shows the Amazon forests of South America. Black lines represent the carbon-rich corridors. Areas with lighter shading depict existing protected areas, while darker colors are lands that are unprotected and potentially open for development.
Posted by Karen Brzys at 7:28 AM