Yesterday Jamey joined Lois and I for a snowshoe along the Sucker River.  It was a warm late afternoon with temperatures in the mid 30s and no wind.  We drove around five miles east of town, turned onto a side road, parked along the side of the road next to the river, and snowshoed south.

The river is beautiful right now with ice forming out from the banks, colored by the tannins in the water. 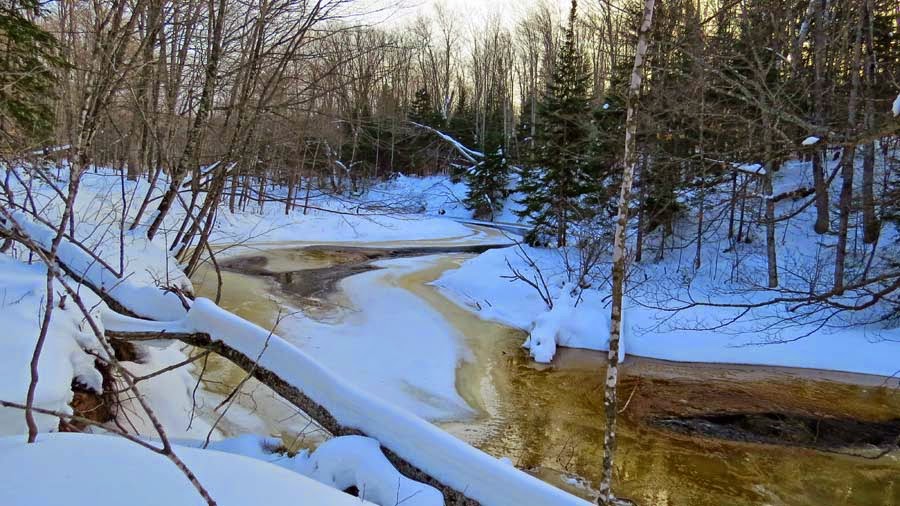 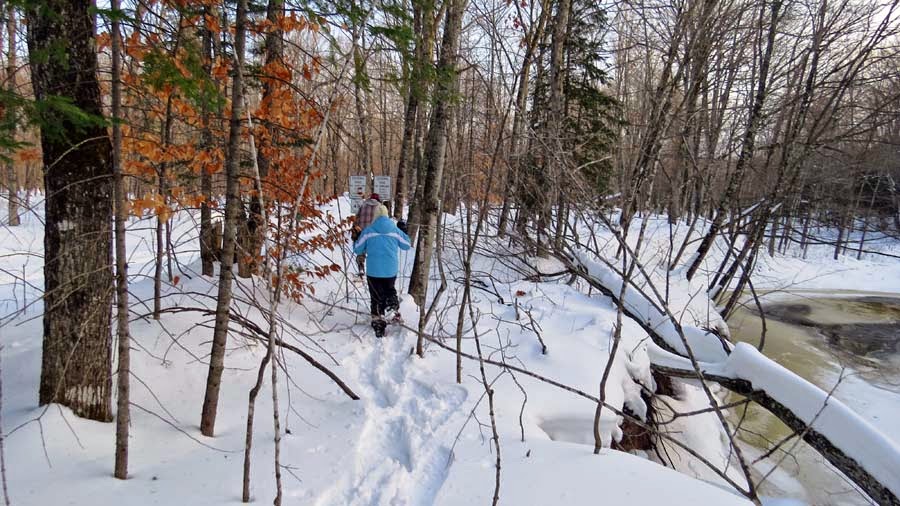 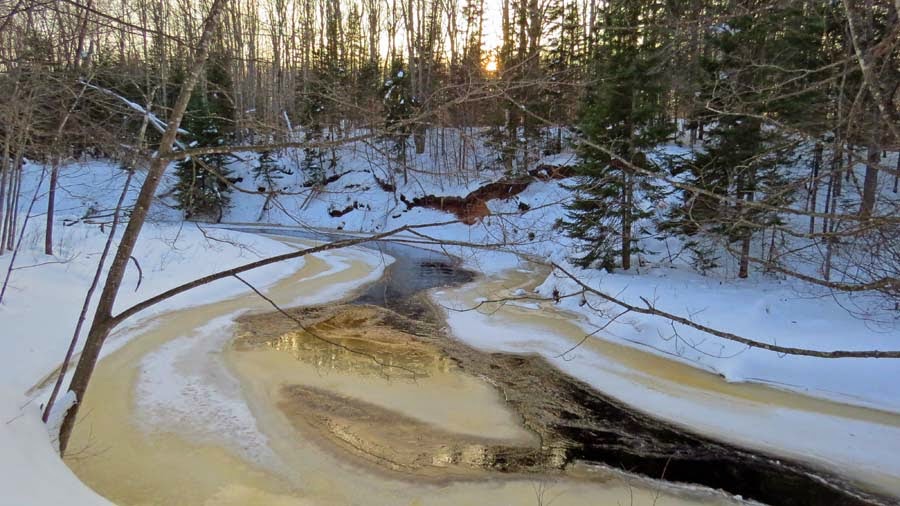 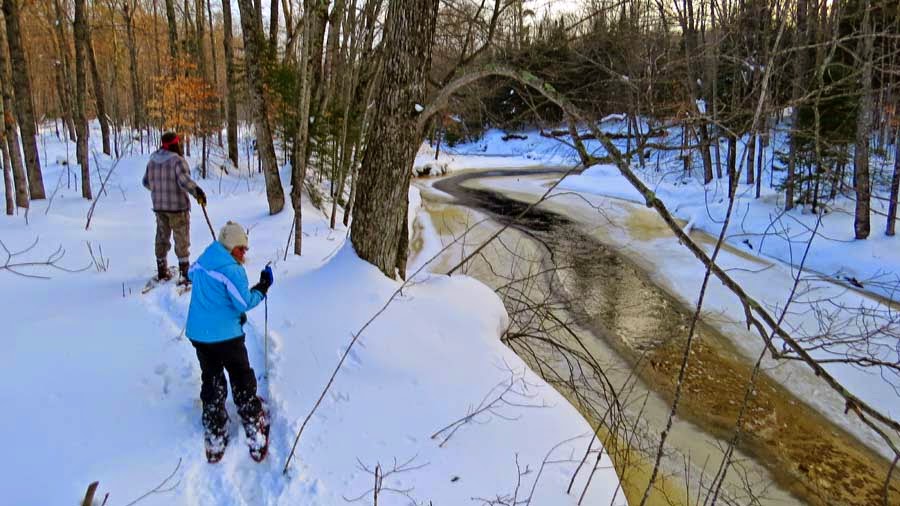 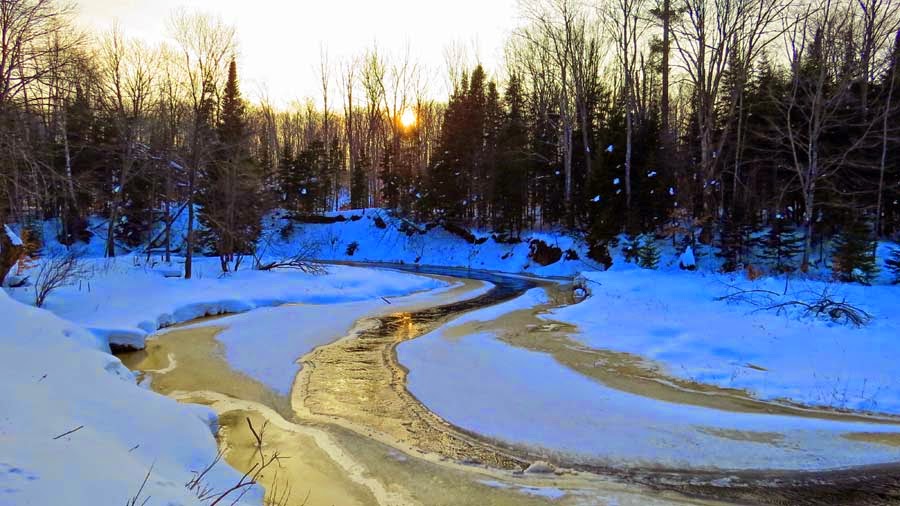 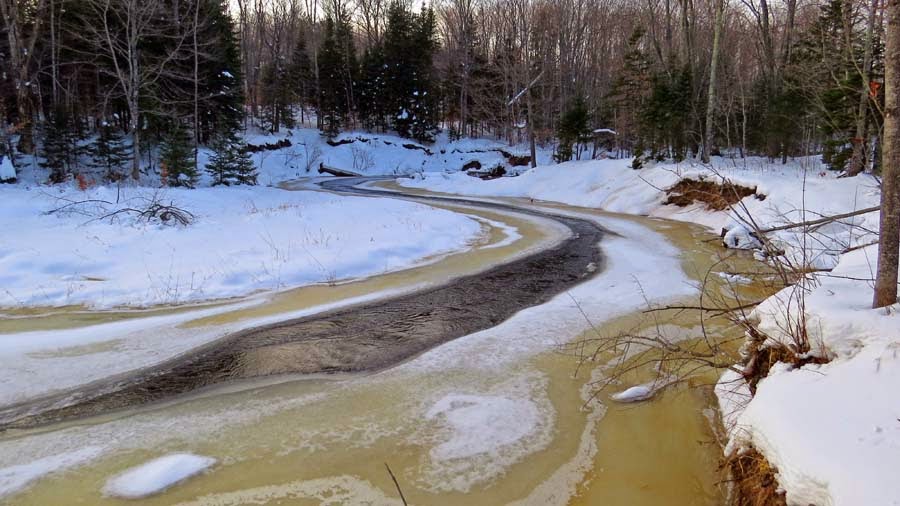 It is easy to see the amount of snow as well as the accumulation from different snow storms on top of downed trees. 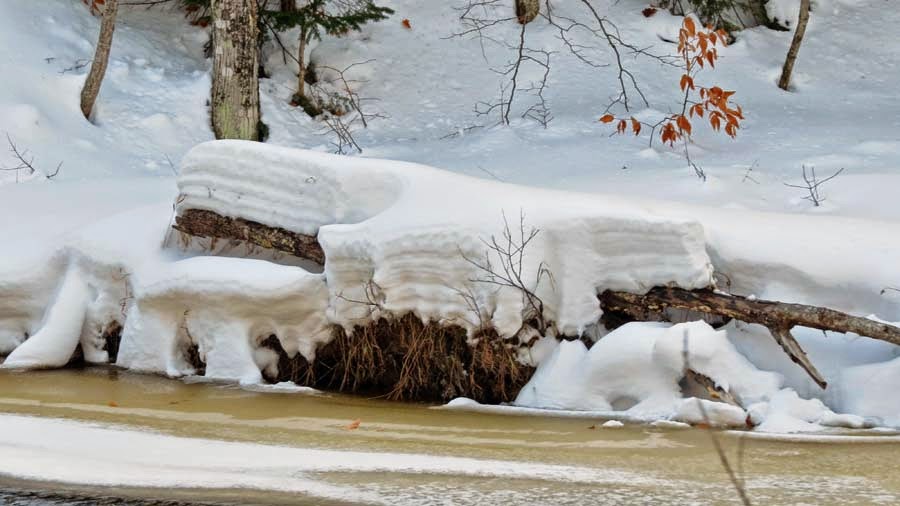 Then Jamey spotted the muskrat.  I could not see the critter without my camera zoom, but I was able to get this shot from around 250 feet away. 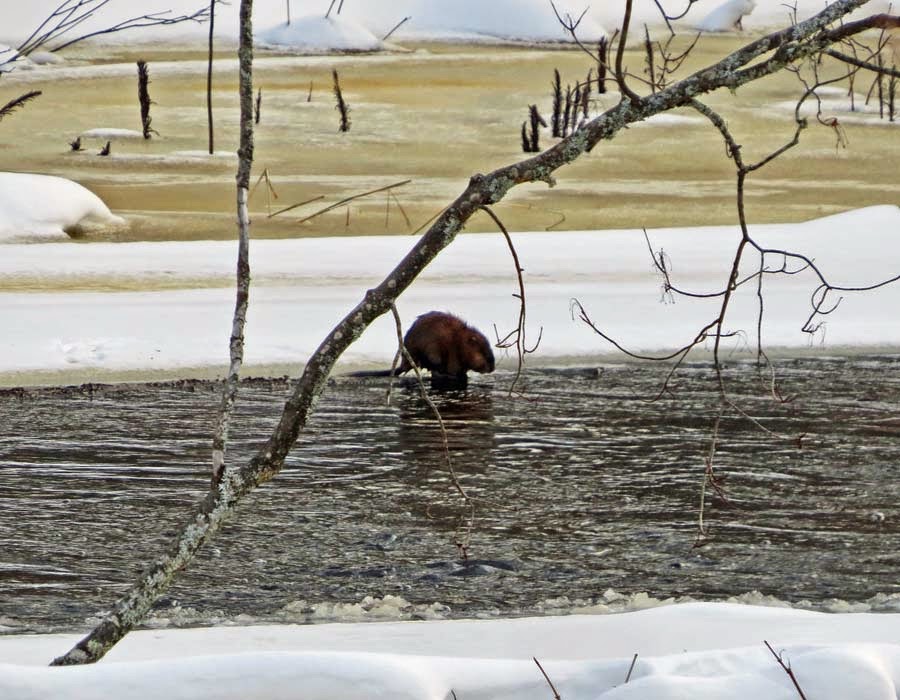 We carefully moved up a bit and I took a few more photos.  The muskrat was cleaning himself.  I took LOTS of photos and narrowed it down the best I could. 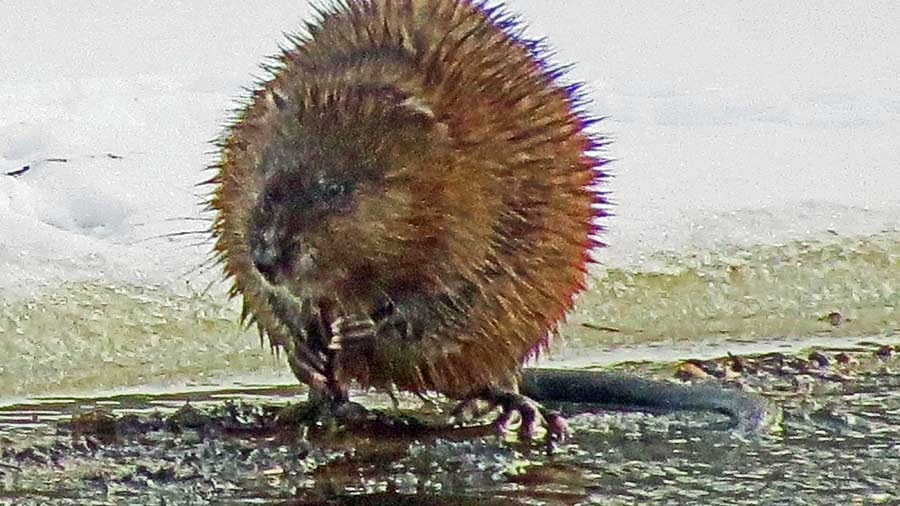 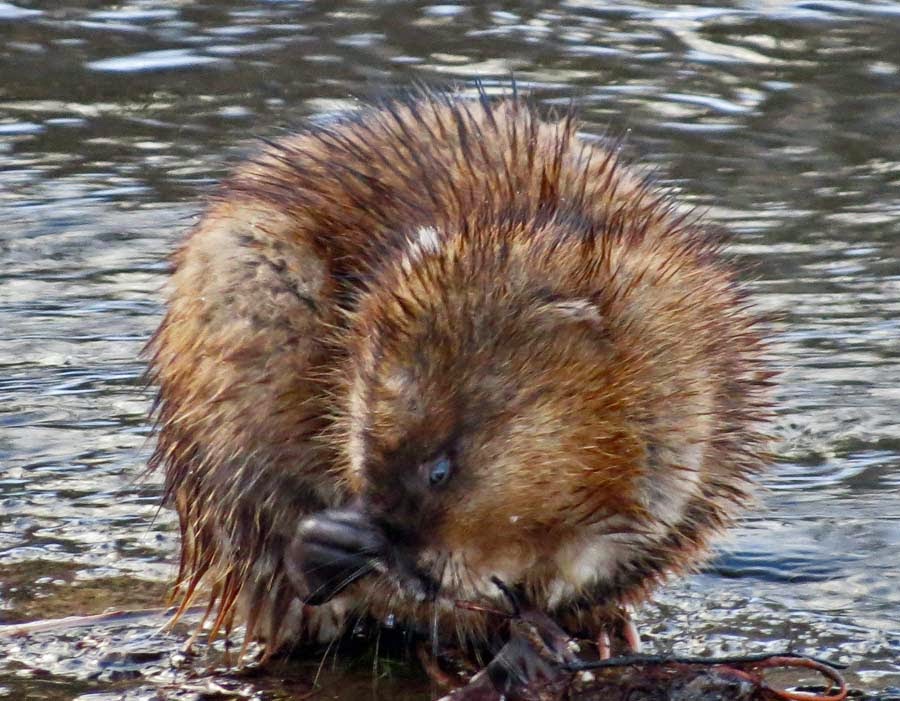 According to the webpage http://en.wikipedia.org/wiki/Muskrat, The muskrat (Ondatra zibethicus), the only species in genus Ondatra.  It is a medium-sized semiaquatic rodent native to North America, and is an introduced species in parts of Europe, Asia, and South America. The muskrat is found in wetlands over a wide range of climates and habitats. It has important effects on the ecology of wetlands, and is a resource of food and fur for humans.

The muskrat is the largest species in the subfamily Arvicolinae, which includes 142 other species of rodents, mostly voles and lemmings.
. 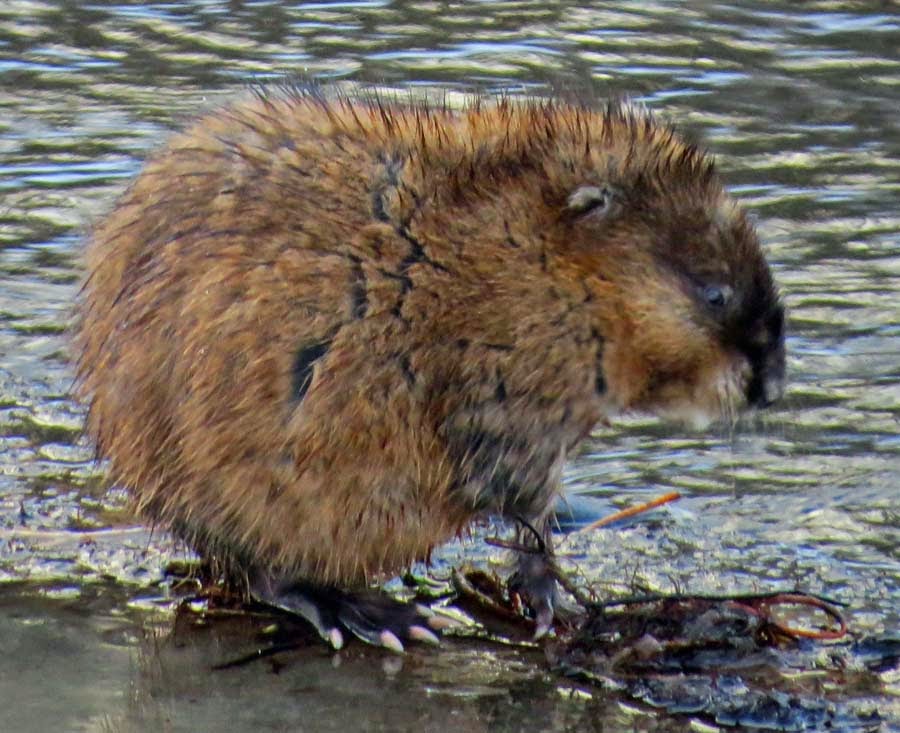 The adult muskrat is about 40–70 cm (16–28 in) long, half of that is the tail, and weighs from 0.6–2 kg (1.3–4.4 lb).  Muskrats spend much of their time in the water and are well suited for their semiaquatic life. They can swim under water for 12 to 17 minutes. Their bodies, like those of seals and whales, are less sensitive to the buildup of carbon dioxide than those of most other mammals. They can close off their ears to keep the water out. Their hind feet are semiwebbed, although in swimming, their tails are their main means of propulsion 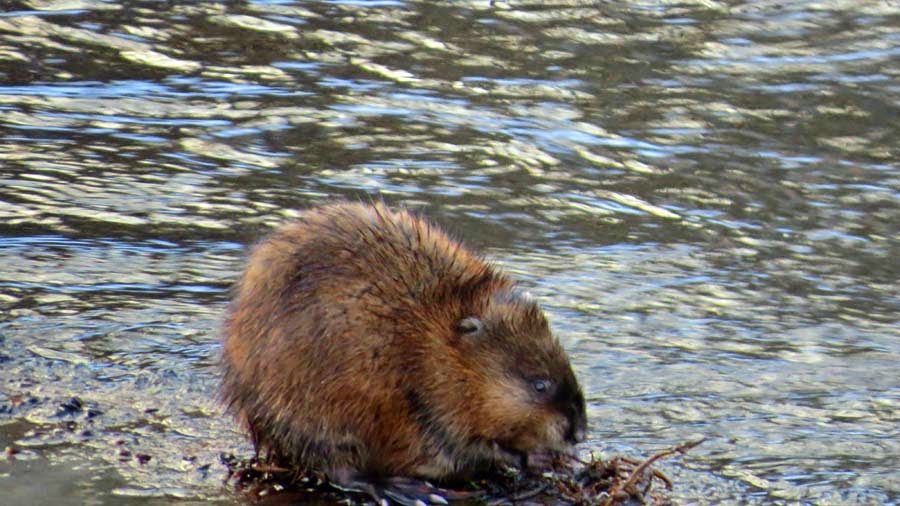 Muskrats are covered with short, thick fur which is medium to dark brown or black in color, with the belly a bit lighter (countershaded); as the age increases, it turns a partly gray in color. The fur has two layers, which helps protect them from the cold water. They have long tails covered with scales rather than hair and, to aid them in swimming, are slightly flattened vertically, which is a shape that is unique to them.  When they walk on land, their tails drag on the ground, which makes their tracks easy to recognize. 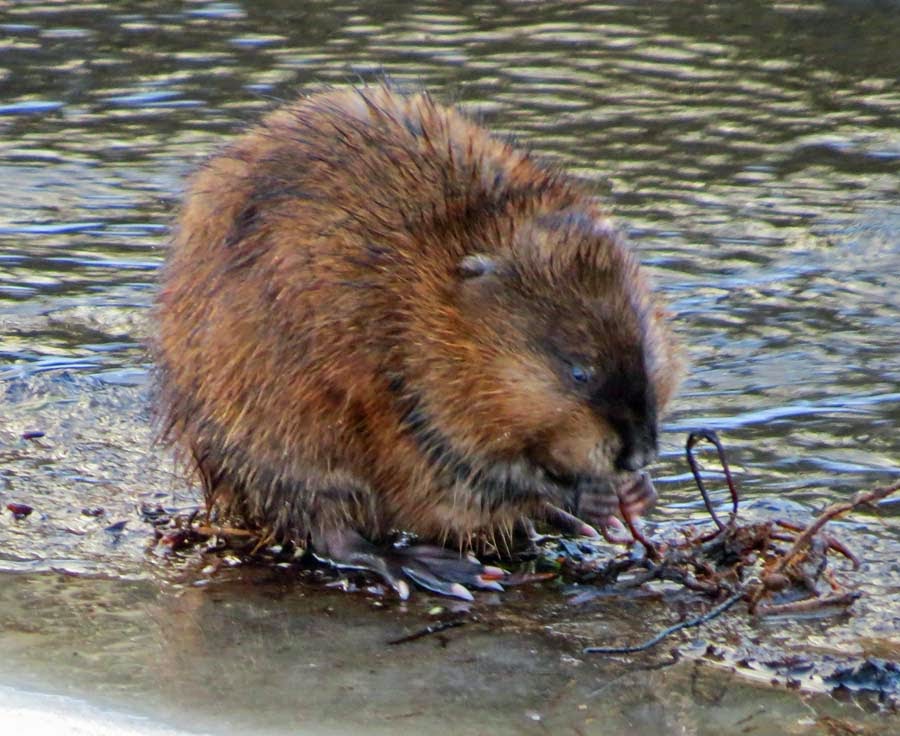 Muskrats normally live in groups consisting of a male and female pair and their young. During the spring, they often fight with other muskrats over territory and potential mates. Many are injured or killed in these fights. Muskrat families build nests to protect themselves and their young from cold and predators. In streams, ponds or lakes, muskrats burrow into the bank with an underwater entrance. These entrances are 6–8 inches wide. In marshes, push-ups are constructed from vegetation and mud. These push-ups are up to three feet in height. In snowy areas, they keep the openings to their push-ups closed by plugging them with vegetation, which they replace every day. Some muskrat push-ups are swept away in spring floods and have to be replaced each year. Muskrats also build feeding platforms in wetlands.  Plant materials make up about 95% of their diets, but they also eat small animals, such as freshwater mussels, frogs, crayfish, fish, and small turtles.

Sunset through the trees... 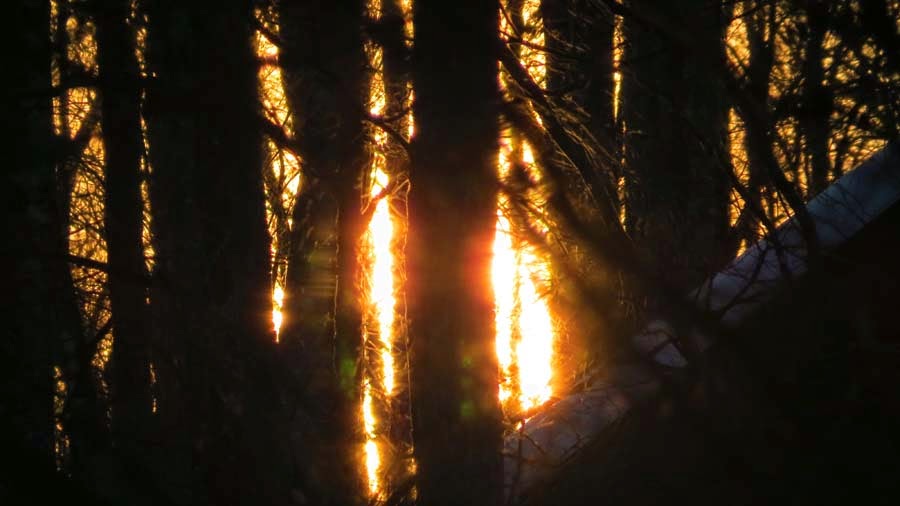 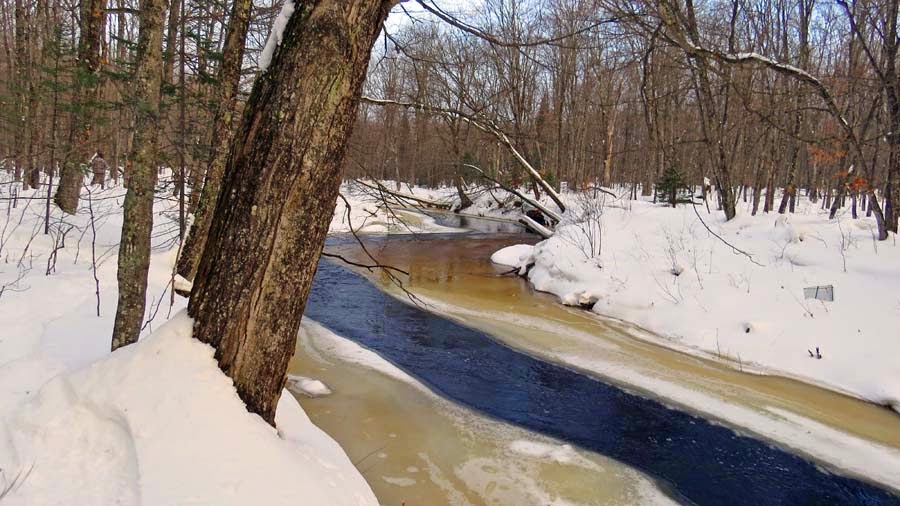 Jamey made us a nice little fire and we took a break to have a glass of port. 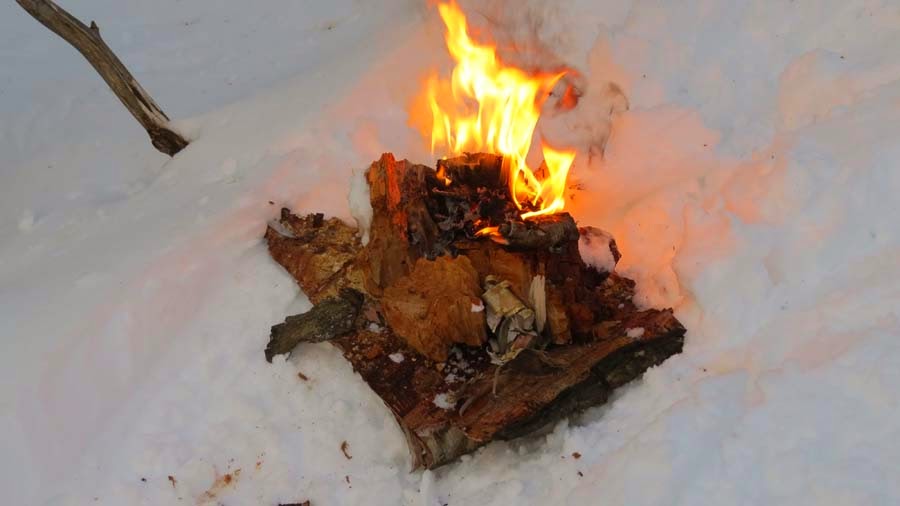 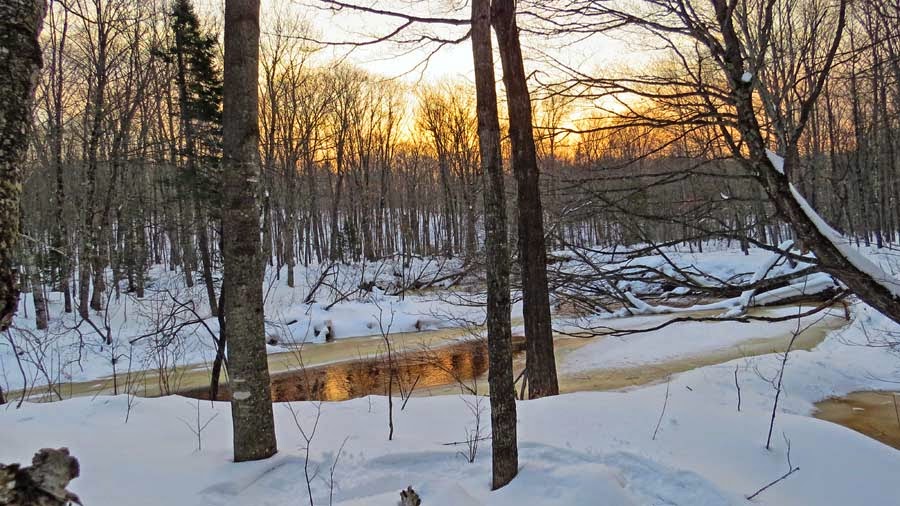 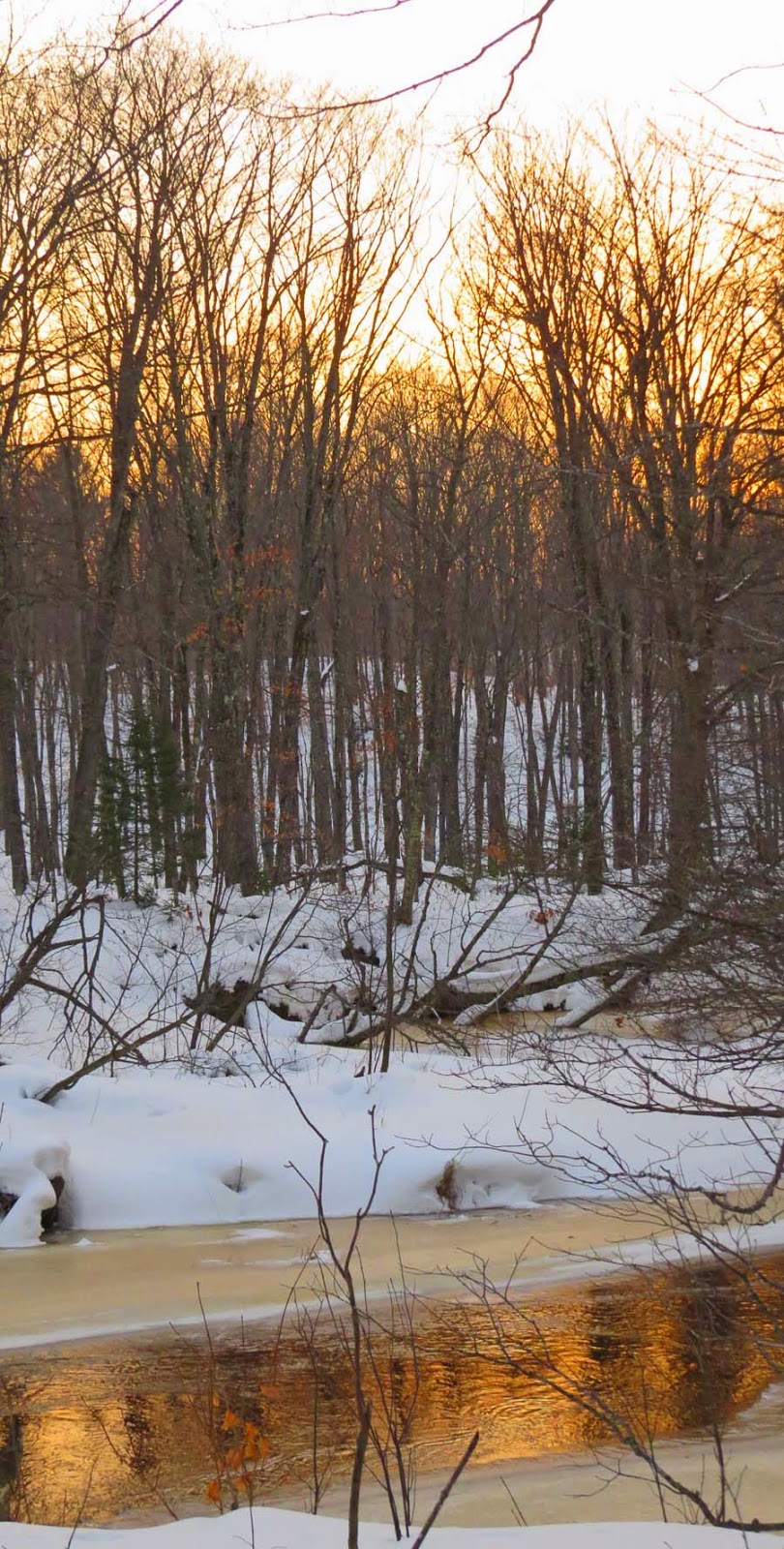 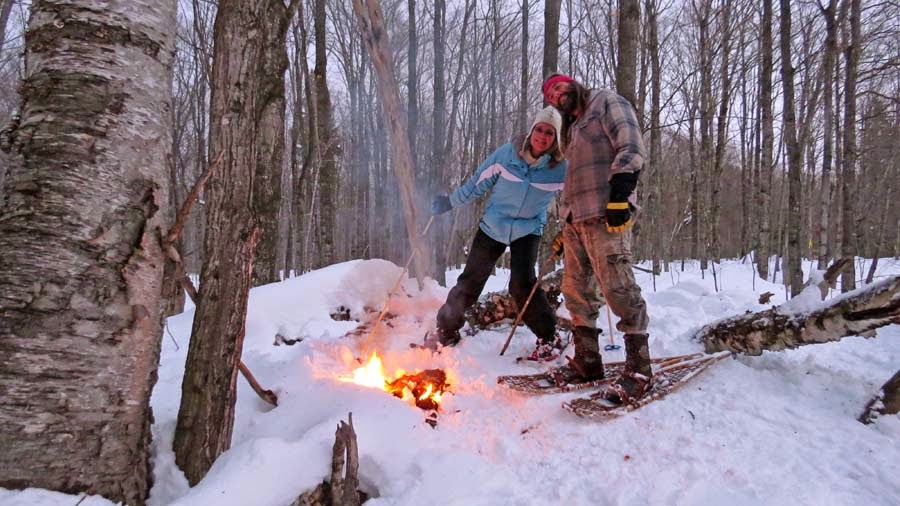 What a nice snowshoe it was.
Posted by Karen Brzys at 8:50 AM