Last night after closing the museum I was playing cribbage with friend, Renee, when she noticed the bluebird in front of my house.  I immediately grabbed my camera and was able to get a couple of photos. 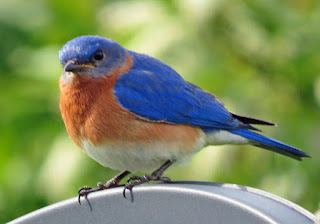 The bluebirds are a group of medium-sized birds in the genus Sialia of the thrush family (Turdidae).  They are known to be mostly insectivorous, but can be omnivorous.  Gardeners like to have them around since they can be voracious in their appetite for insects.  They are blue with rose beige underside. Female birds are less brightly colored than males, although color patterns are similar and there is no noticeable difference in size as can be seen in the Wiki image below. 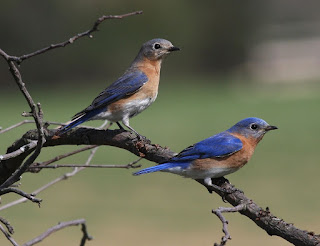 The species I photographed is an Eastern Bluebird (Sialia sialis), which is the state bird of Missouri and New York. 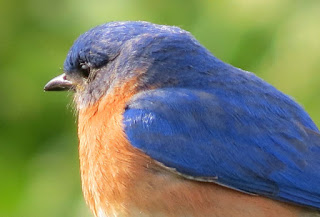 Bluebirds are territorial and prefer open grassland with scattered trees. This is similar to the ecosystem of many other species.  By the 1970s, their numbers had declined by as much as 70% due to unsuccessful competition with house sparrows, woodpeckers, and starlings.  Introduced species of competitive birds caused most of the decline in numbers.  However, in the last decade volunteers have established and maintained bluebird trails and platforms, which has helped these beautiful birds to increase their population numbers.   The range for the Eastern Bluebird is shown below. 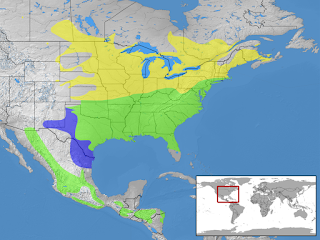 Eastern bluebirds are very social birds. At times, they gather in flocks of a hundred or more. However, they are territorial during the breeding season and may continue to defend a feeding area throughout the winter. Mating occurs in the spring and summer. A mature female typically raises two broods each season (March through August). Males identify potential nest sites and attract prospective females by singing, flapping his wings, and placing some material in a nesting box or cavity. If the female accepts the male and the nesting site, she alone builds the nest and incubates the eggs.

Nests are constructed in trees within abandoned woodpecker holes or other cavities that provide adequate protection (usually several feet above ground). The female takes around 10 days to complete the nests, which are small, cup-like structures lined with grass, feathers, stems, and hairs. 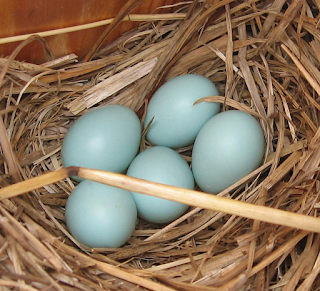 
Both parents cooperate in raising the young, which they feed a diet consisting almost entirely of insects. Some young stay around the nest to help raise another brood. Fledglings are grayish in color, with speckled breasts. The blue color becomes much more prominent and the speckles on their breasts disappear as they mature. Bluebirds may begin breeding the summer after they are hatched. Eastern bluebirds can live for 6 to 10 years. The record lifespan for a bluebird was 10 years and five months.  However, a majority of bluebirds die within their first year of life. Starvation and freezing can threaten young bluebirds, but most threats come from other animals, including humans. Natural predators of eggs and nestlings can include eastern chipmunks, flying squirrels, American black bears, fire ants, and raccoons. Bluebirds of all ages (including adults) are threatened by rat snakes, racers, and American kestrels. Introduced species such as European starlings, house sparrows and domestic cats pose a major threat to bluebird nests, as well, with the cat being a serious predator of adult bluebirds and the other birds being competitors for nesting sites. Non-nesting adults face predation with all native species of falcons, owls, and most varieties of hawks (particularly in the Accipiter genus). When approached by a predator, males make a song-like warning cry. If a male is not present, a female will begin to sing, hoping to attract a protective male back to the territory. Both males and females also flick their wings and warble when predators are nearby, but losses are often heavy when a persistent predator finds their nest.