When I finished up at the museum last night I had a meeting and then when I was thinking about going for a hike -- the rain came in buckets.  Needless to say, I just headed home.  So for today's blog posting, I checked in to see what is happening with the Mars rover, Curiosity from the NASA webpage: http://mars.nasa.gov/msl/multimedia/images/. 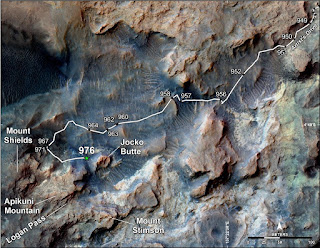 
The above map shows the route on lower Mount Sharp that NASA's Curiosity followed in April and early May 2015, in the context of the surrounding terrain. Numbers along the route identify the sol, or Martian day, on which it completed the drive reaching that point, as counted since its 2012 landing.

The map covers an area about one-third of a mile (half a kilometer) across. North is up. After the observations and measurements made by Curiosity's instruments at the base of Mount Shields, the rover resumed its approach to Logan Pass, on a route passing west of "Jocko Butte." The Sol 976 drive was completed on May 5, 2015.

NASA's Curiosity Mars rover recorded the above photos of the sun setting at the close of the mission's 956th Martian day, or sol (April 15, 2015), from the rover's location in Gale Crater.  The four images shown in sequence here were taken over a span of 6 minutes, 51 seconds. This was the first sunset observed in color by Curiosity. Dust in the Martian atmosphere has fine particles that permit blue light to penetrate the atmosphere more efficiently than longer-wavelength colors. That causes the blue colors in the mixed light coming from the sun to stay closer to sun's part of the sky, compared to the wider scattering of yellow and red colors. The effect is most pronounced near sunset, when light from the sun passes through a longer path in the atmosphere than it does at mid-day. 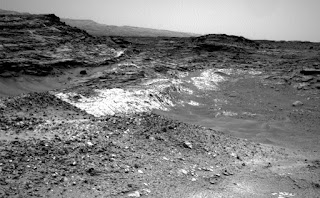 The Martian outcrop above shows where pale rock meets darker overlying rock.  This is an example of a geological contact, which can reveal clues about how the environmental conditions produced the rock types. NASA's Curiosity Mars rover took this image  after finishing an uphill drive of about 72 feet (22 meters) on the 991st Martian day, or sol of the rover's work on Mars (May 21, 2015).
Posted by Karen Brzys at 9:17 AM