It has been raining in Grand Marais for the past couple of days.  Rain and fog certainly makes for gray days.  We did get exercise last night (Sable Falls steps), but since we walked in the rain I did not bring my camera.

So for today's blog posting I went to one of my favorite NASA websites:  http://earthobservatory.nasa.gov/ 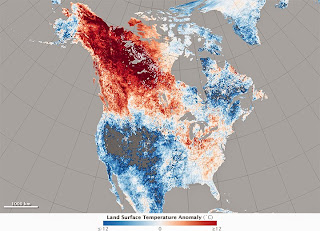 During the third week of May it was warmer in Fairbanks, Alaska, than in Washington, D.C. The small town of Eagle, Alaska, was hotter on May 23 than it has been on any day in Houston or Dallas this year. In what has become a frequent occurrence in the past few years, temperature profiles in North America appeared to be upside down.

The map above shows North American land surface temperatures from May 17–24, 2015, compared to the 2001–2010 average for the same eight-day period. Shades of red depict areas that were hotter than the long-term average; areas in blue were below average for the week. White pixels were normal, and gray pixels did not have enough data, most likely due to excessive cloud cover. 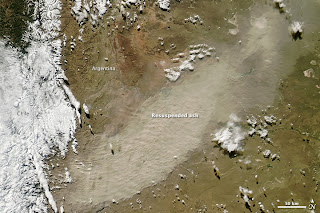 In late April 2015, Calbuco volcano in southern Chile spewed at least 210 million cubic meters (7,420 million cubic feet) of ash and rock during three explosive eruptions. A significant amount of the ash came to rest in neighboring Argentina. But some of that material didn’t stay put for long. On May 3, 2015, one of NASA’s  satellites acquired the above image of ash resuspended in the atmosphere—that is, it was picked up by low-level winds like debris in a dust storm. Calbuco (not pictured) is located about 100 kilometers (60 miles) southwest from the lower-left corner of this image. 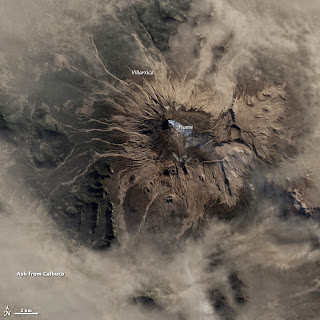 Other ash from Calbuco moved north toward Villarrica—another volcano in Chile that has seen renewed activity in 2015. On April 27, 2015, NASA acquired the image above, which shows a small steam or ash plume rising from Villarrica. But the brown, airborne material surrounding the volcano, and presumably some of the brown material on its flanks, is from Calbuco, located about 220 kilometers (140 miles) to the south. 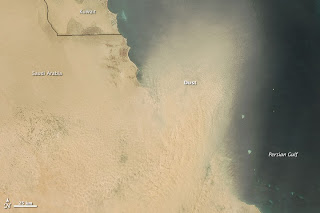 NASA’s Aqua satellite captured the above natural-color image on April 22, 2015. Strong winds blew a thick plume of dust from Saudi Arabia out over the Persian Gulf. There is a rich supply of dust in the Arabian Peninsula’s Empty Quarter or Rub’ al Khali. Considered empty because it has so few human inhabitants, the Empty Quarter contains half as much sand as the entire Sahara Desert. 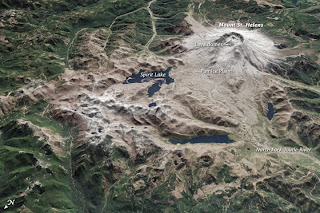 On May 18, 1980, Mount St. Helens gave way to a cataclysmic flank collapse, avalanche, and explosion that killed 57 people and displaced many others. The event dramatically reshaped the volcano and surrounding land in southwest Washington.

Now, 35 years later, satellites in orbit and scientists on the ground still monitor the mountain and track its recovery. The image above shows a view the mountain, looking toward the southeast, as it appeared on April 30, 2015.

The mountain’s north flank was the site of the collapse and lateral explosion that devastated 390 square kilometers (150 square miles) of the landscape. The visualization below, based on digital elevation models from the U.S. Geological Survey, shows the elevation of the volcano’s summit before and after the blast.

Deposits from the landslide on the north flank—one of the largest in recorded history—buried the valley of the North Fork Toutle River with debris up to 180 meters (600 feet) deep in some places. Rivers have since reworked their way across the landscape, and new vegetation has greened up much of the land. The Pumice Plain still looks barren in the satellite imagery, but ground surveys note that small plants have regrown here too.

Not all of the recovery, however, is natural. According to Steve Malone, an emeritus professor at the University of Washington, much of the blow-down area was replanted and fertilized to get commercial crops, such as timber, growing again. “Only within the monument have things been left to recover naturally.”

Scientists also keep a vigilant watch on the inside of the crater, where two lava domes have formed. In the image at the top of this page, the dome in the crater’s foreground grew until 1986, at which time the volcano became quiet again. Renewed activity in 2004—followed by a phase of lava extrusion that lasted until 2008—formed a second lava dome immediately behind the first.

On the left side of the top image, log rafts are still visible in Spirit Lake. These drifting rafts are composed of floating trees, thousands of which were uprooted and carried there in 1980. The raft is gradually shrinking in size from year to year as trees sink to the bottom of the lake.

Not visible in this image, however, is the 2,600-meter-long (8,500-foot-long) drainage tunnel constructed in 1985 to carry water from the lake, through a ridge, and into a nearby creek. Eruption debris had blocked the natural outlet into North Fork Toutle River, so the tunnel was built to control the water level and prevent a potentially disastrous flood. News reports say the tunnel is becoming constricted and “needs work.”