Now that I am home, I have resumed my exercise program with friend, Lois Fite.  Today we went up and down the steps at Sable Falls three times.  On the second trip we walked all the way to the shoreline so I could see the current lake level.  Ever since I was a kid one of my favorite beaches was the shoreline at the mouth of Sable River.  As I have reported in other recent posts, that beach no longer exists.  It is even worse after the last storm.

The photo below shows the end of the trail that used to lead to the beach.  It is now a dead end right to the lake. 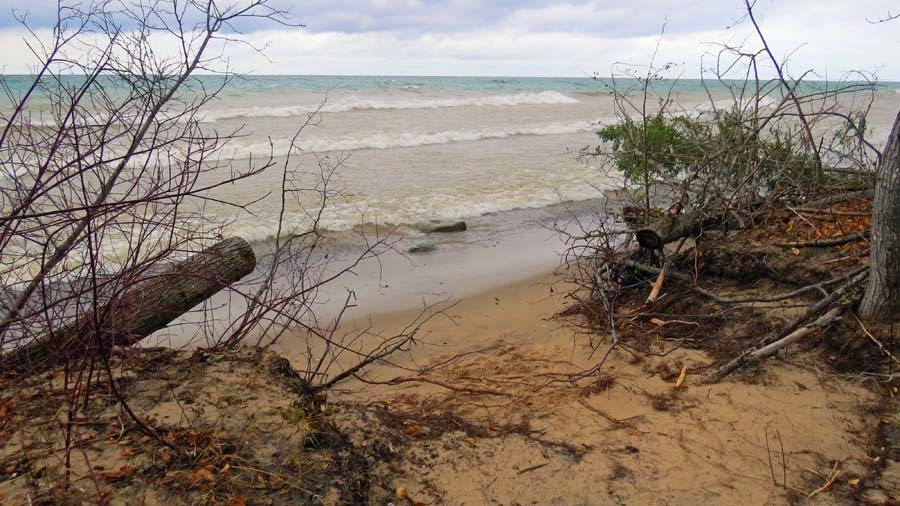 I decided to research data about the current level of Lake Superior.  What a difference we have seen during the last couple of years.  In 2012 the level of Lake Superior dropped to the second lowest of all time, which included a decrease of nine inches in just six months.  Lakes Huron and Michigan dropped 18 inches over the same period.  The lower lake levels had a significant economic impact since freighters had to lighten their loads.  Tourism and fishing were also impacted.  The lower lake levels were caused by a long-term cycle of too little water from melting snow and rain to counter the effects of evaporation on the lakes,  Also, 2012 was the warmest year on record for the continental United States, which increased evaporation on the Great Lakes.  Evaporation was further increased by the lack of ice cover in previous years, declining 71 percent over the past 40 years.  During the 2011-12 winter, only five percent of the Great Lakes were covered by ice. 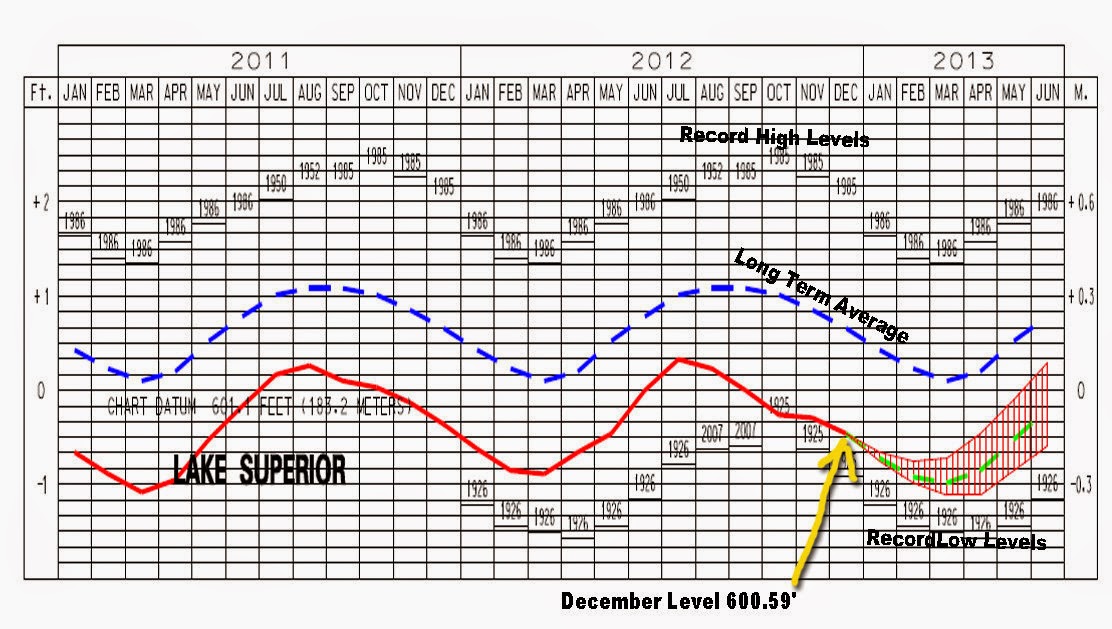 Over the past two years climate change swung the other way in the Great Lakes region. The last two years of heavy snow and spring rain have led to the significant rise in lake levels. Last winter's snow pack in Michigan alone was 30 percent higher than at any time in the past decade. The massive ice coverage last winter also decreased evaporation.

Current data from the U.S. Army Corps of Engineers shows that for the first time in 14 years, all five Great Lakes are at or above average water levels.  Since the low water level recorded in March 2013,  the level of Lake Superior has risen 30 inches as of August 2014. 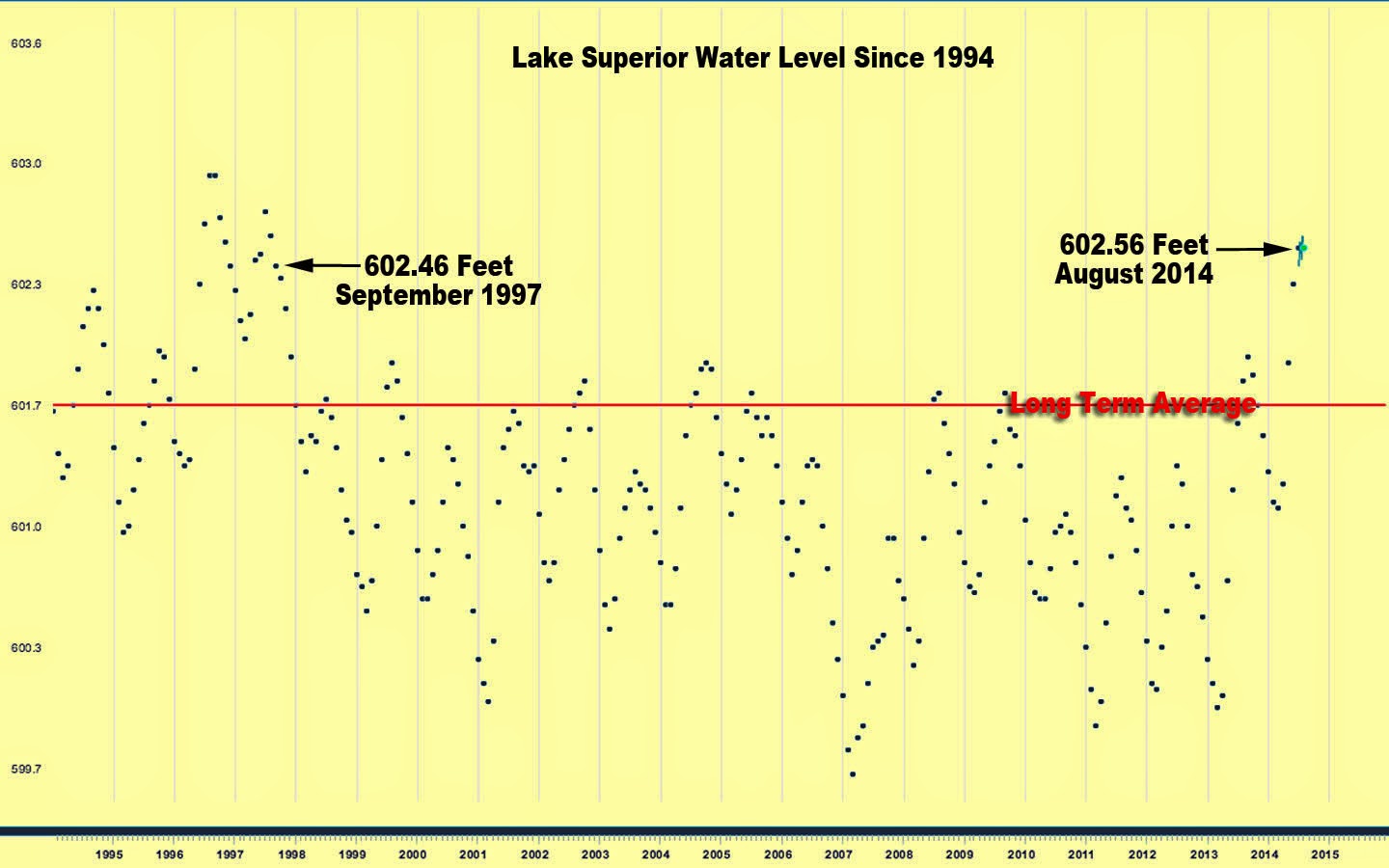 For many reasons the increase in lake levels is a good thing. The extra water has widened the lakes and allowed the high water mark to recover, helped to replenish wetlands and shoreline habitats, covered shipping hazards, restored the usability of docks and boat launches, and allowed freighters to carry full loads.

In Grand Marais, however, the higher water level of Lake Superior combined with the large number of early fall storms has caused significant erosion.  Many of the shoreline beaches no longer are.  The picture below was taken at the end of the Sable Falls path, looking east.  The beach used to extend more than 100 feet to the north (left in the photo). 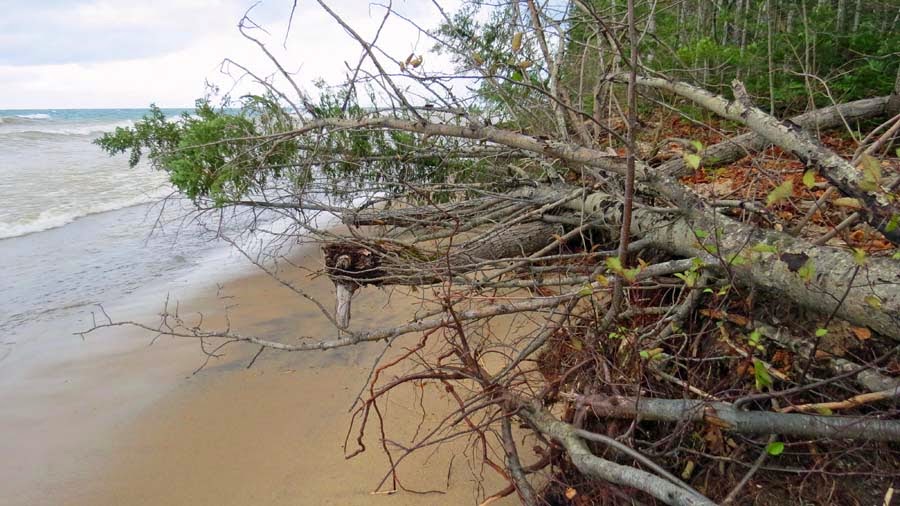