For today's posting I decided to check in with NASA's webpage http://earthobservatory.nasa.gov/.  This page shows photos of Earth taken from various orbiting satellites and the Internatonal Space Station. 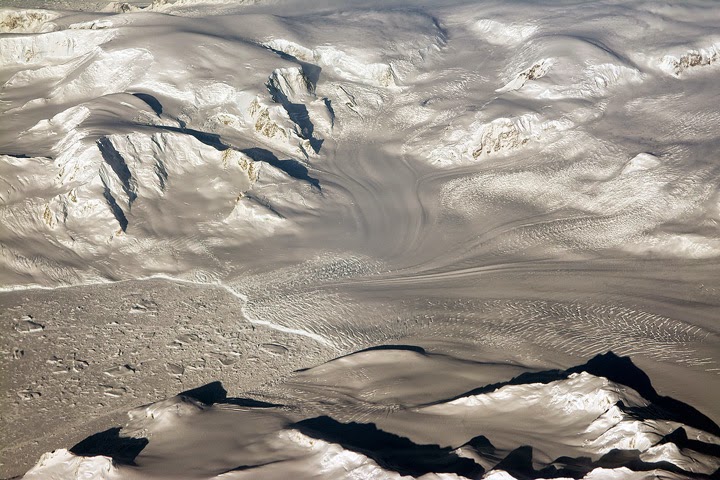 A break in the clouds on October 29, 2014, allowed scientists the opportunity to fly over Pine Island Glacier—one of Antarctica’s most rapidly changing areas. The flight was part of NASA’s Operation IceBridge, a mission that makes annual surveys of Greenland and Antarctica with instrumented research aircraft.  In recent years large chunks have broken off this western end of Antarctica. 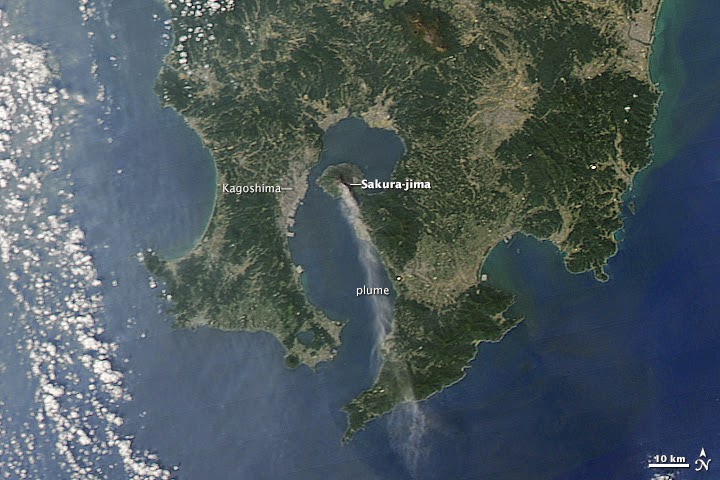 NASA’s Aqua satellite acquired this image of Sakura-jima, a volcano in southern Japan, venting ash over Kagoshima Bay on October 27, 2014. On October 28, the Japan Meteorological Agency reported ash from the volcano rising to an altitude of 2.4 kilometers (7,900 feet) as it drifted south. Sakura-jima is one of Japan’s most active volcanoes. Historical records dating back to the 8th century note frequent eruptions and ashfall on the nearby city of Kagoshima. 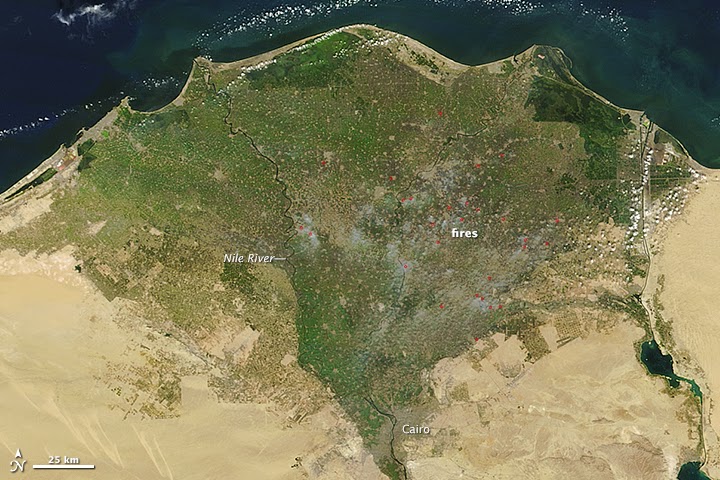 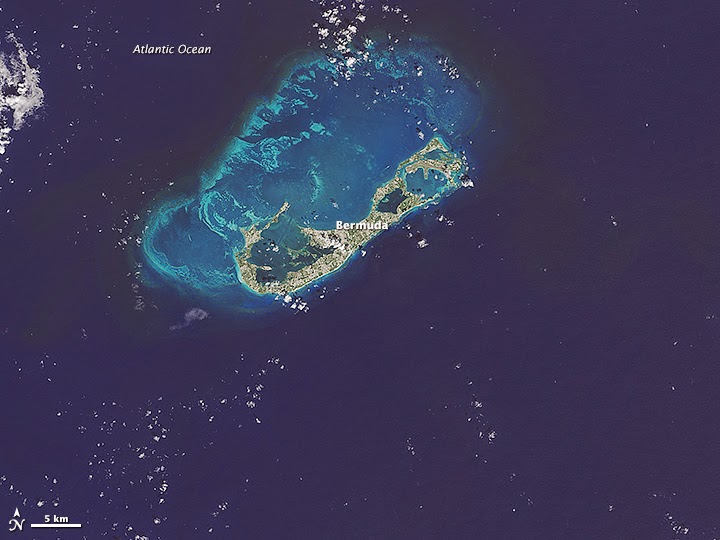 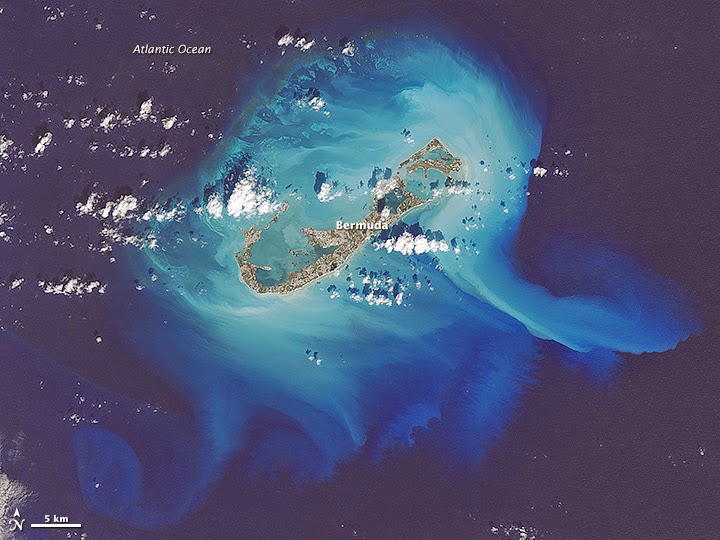 On October 17, 2014, the eye of category 3 Hurricane Gonzalo passed right over Bermuda. The storm knocked out power to most of the island and caused between $200–$400 million in property damage, though it did not cause any deaths. The potent storm also stirred up the sediments in the shallow bays and lagoons around Bermuda, spreading a huge mass of sediment across the North Atlantic Ocean. 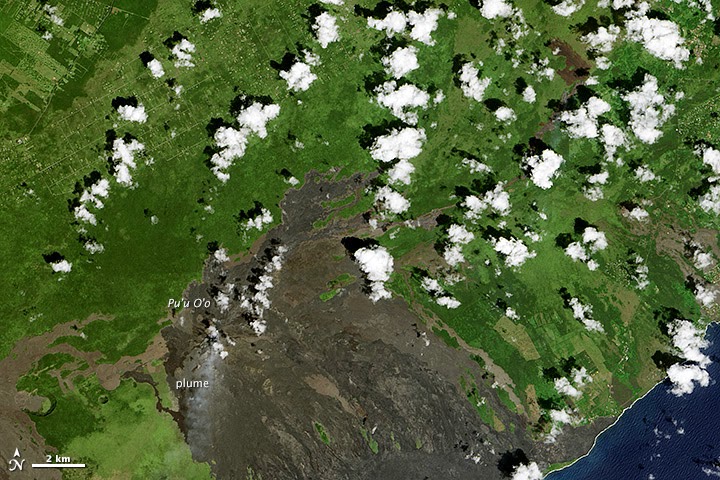 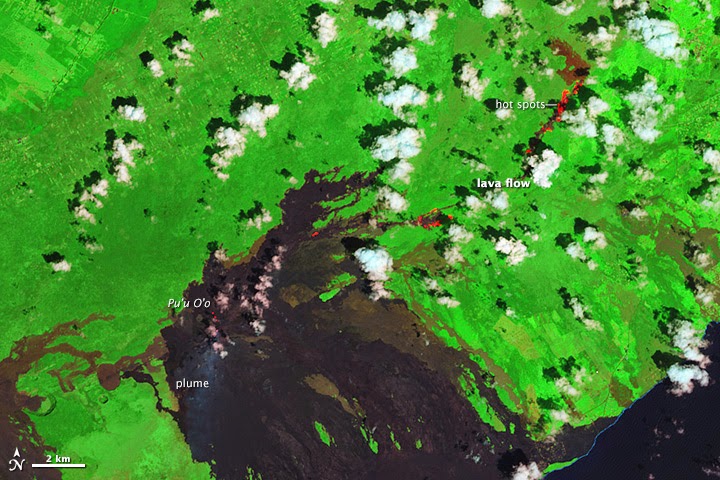 The June 27th lava flow—named for the day it began erupting from a vent on Kilauea’s Pu‘u ‘O’o crater—continues to move northeast through forests in Hawaii near the town of Pãhoa. The Operational Land Imager (OLI) on Landsat 8 satellite captured these images of the flow on September 24, 2014. In the natural color image (top), lava flows appear gray. Vegetation is dark green.

The lower image shows the lava flows in false-color (combining shortwave infrared, near infrared, and green light). The hot surface of the flows radiate shortwave infrared light, which appears red. Light green indicates vegetation. Rocky lava flows—up to 50 years old, too young for significant regrowth of vegetation—are black. The flow was within 3.3 kilometers (2.1 miles) of Pãhoa when Landsat 8 acquired the images. 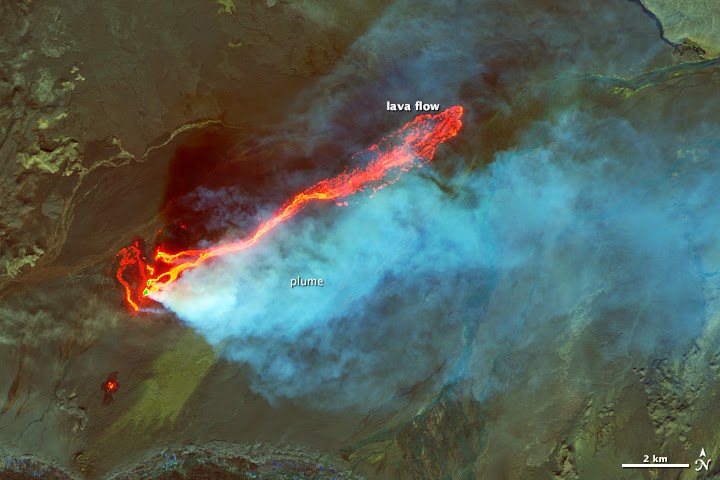 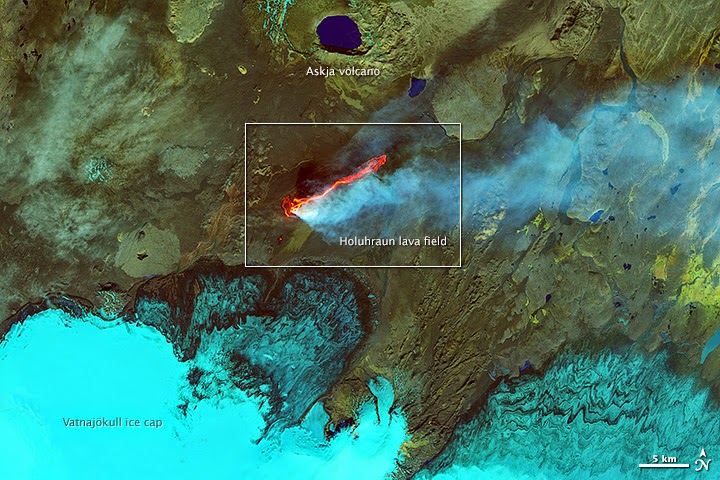 As an island in the moist, atmospherically turbulent North Atlantic, Iceland is often shrouded in cloud cover and hard to observe from space. And lately, the island is making some of its own cloud cover, as the Earth has split open between the Bardarbunga and Askja volcanoes and spewed lava and hot gas. The view of the Holuhraun lava field has been spectacular from the ground and from low-flying aircraft. Infrared imaging makes the view spectacular from space, too.

On September 6, 2014, the Operational Land Imager (OLI) on Landsat 8 captured this view of the ongoing eruption. The false-color images combine shortwave infrared, near infrared, and green light.  Ice and the plume of steam and sulfur dioxide appear cyan and bright blue, while liquid water is navy blue. Bare or rocky ground around the Holuhraun lava field appears in shades of green or brown in this band combination. Fresh lava is bright orange and red.

“Thermal imagery can be used to determine the extent of the lava flows and the heat loss. Infrared imagery can help scientists estimate the effusion rate—the rate at which lava is pouring out of the Earth—as well as the sulfur dioxide content of the plume.

By some accounts, Holuhraun has spewed more lava this month than any Icelandic volcano since the 19th century. As of September 9, 2014, the new lava flow was 16 kilometers (10 miles) long and covered about 20 square kilometers (8 square miles).


The plume from Holuhraun is rich with sulfur dioxide (SO2), a rotten-smelling gas that can cause respiratory problems in humans and animals. A blue haze of SO2 and aerosols has been observed downwind over several towns and villages in eastern Iceland. Scientists and other observers working near the eruption site have been evacuated several times and cautioned to keep gas masks handy due to noxious gases and shifting winds. Elevated levels of SO2 have been detected as far as Ireland, Greenland, and Scandinavia.