For today's blog posting I checked in with the website http://earthobservatory.nasa.gov/. 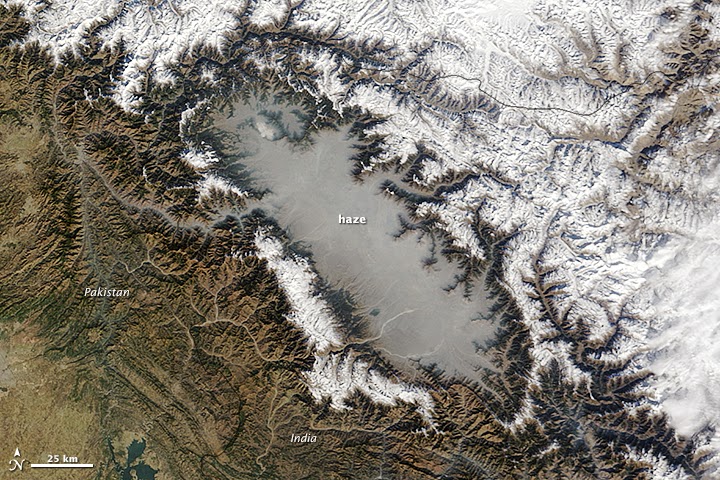 About 4.5 million years ago, the Kashmir Valley was at the bottom of a large lake, encircled by a ring of rugged mountains. Much of the lake’s water has long since drained away through an outlet channel on the valley’s west side. However, evidence of the lake remains in the bowl-like shape and the clay and sand deposits on the valley floor. The mountains surrounding Kashmir Valley now trap air a bit like they once trapped water. The high ridges can set up airflow patterns that concentrate smoke and other airborne pollutants near the valley floor, causing outbreaks of haze. 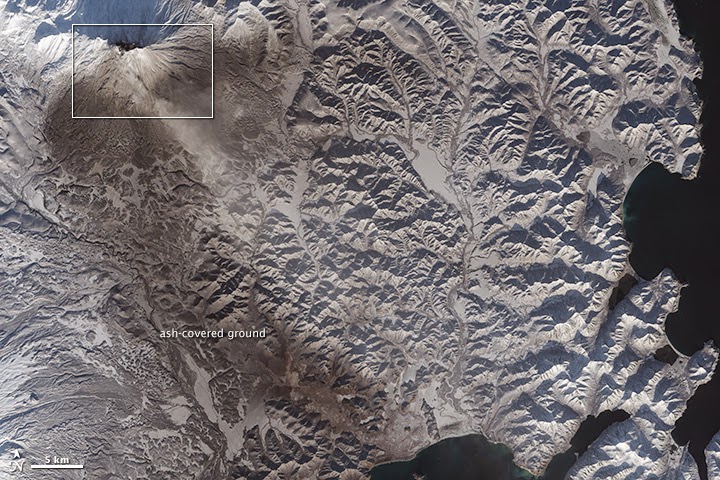 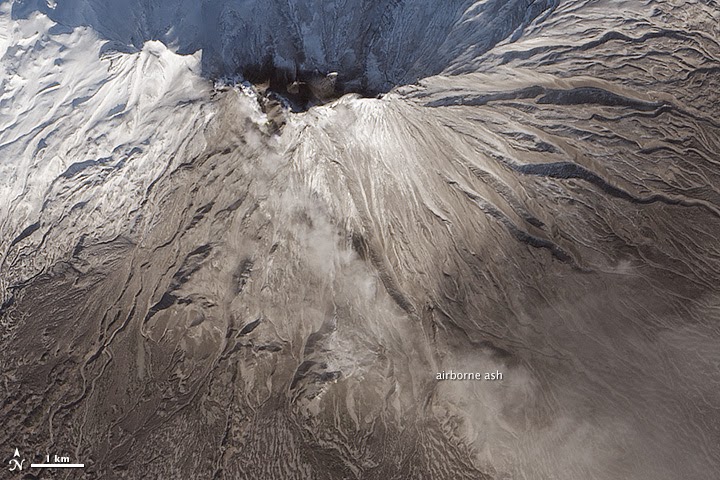 The ongoing eruption at Zhupanovsky volcano has left its mark on the mountain’s slopes. Ash—in the air and on the snow—is visible in these images.  Zhupanovksy, located on Russia’s Kamchatka Peninsula, began erupting on June 6, 2014. November 2014 began with a strong explosive event at the volcano, which tapered into a series of moderate explosive events toward the end of the month. According to the Global Volcanism Program, the explosions at Zhupanovksy are phreatic, caused by the nearly instantaneous vaporization of water by hot material below the surface. 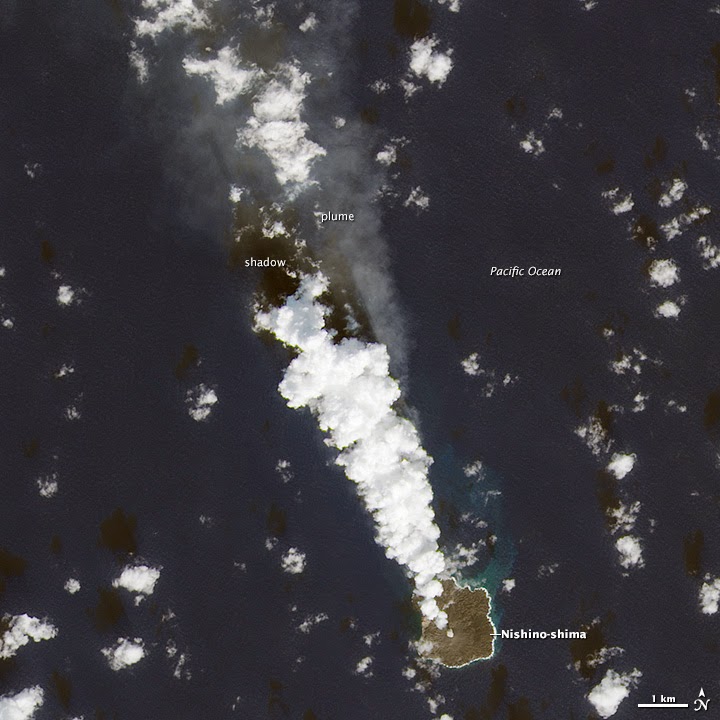 Volcanic activity along the western edge of the Pacific “Ring of Fire” gave rise to a tiny island in late November 2013. Since then, the new island has fused with nearby Nishinoshima and continued to grow. When it was last measured by the Japanese coast guard, the island covered 1.89 square kilometers (0.73 square miles). Its highest point was 100 meters (328 feet) above sea level.
Volcanologists find no signs that the eruption is abating and expect the island to grow two or three times its current size, according to news reports. 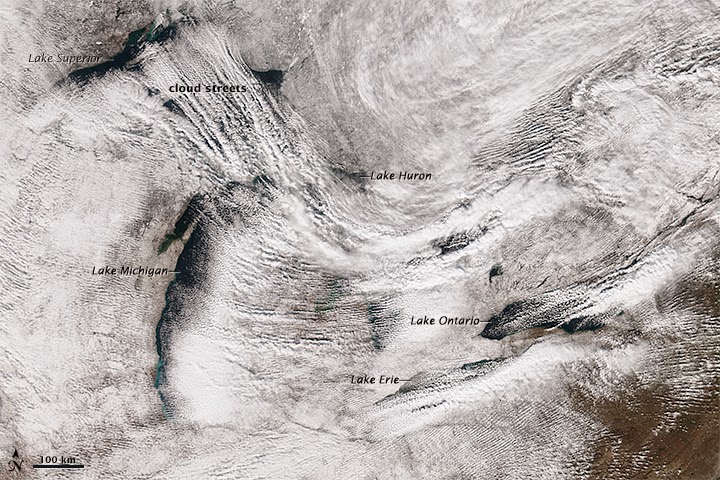 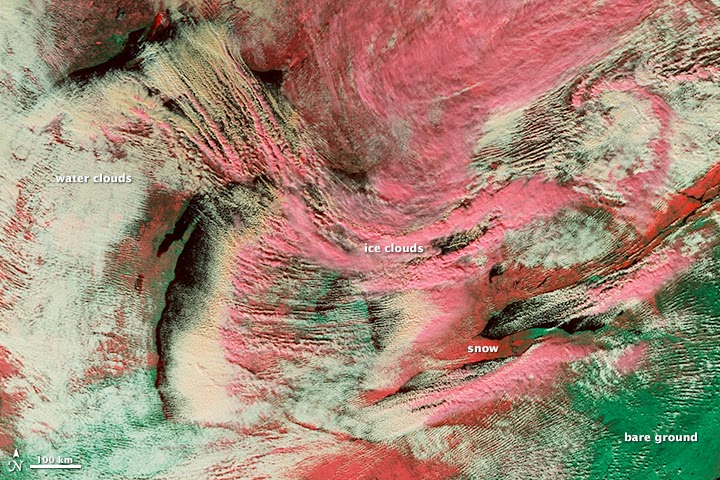 On November 5, 2014, spiral-shaped Super Typhoon Nuri lost its eye and began to morph into a comma-shaped extratropical cyclone as it approached the cool waters of the Bering Sea. After undergoing a rapid strengthening process meteorologists call “bombogenesis,” what emerged was one of the most intense extratropical cyclones ever recorded in the North Pacific, a storm with a minimum central pressure that plunged to 924 millibars. (For comparison, the all-time record low for an extratropical cyclone is 913 millibars.)

Two weeks later, the downstream effects of the Bering Sea Superstorm lingered on—in the form of a massive lake effect snowstorm that dropped several feet of snow in communities just east of Lake Erie. While the Bering Sea Superstorm did not directly cause the snow event in New York, it did set the stage for it by nudging the jet stream into an unusual shape that sent a pulse of cool Arctic air south over the central United States.

As that dry, cool air rushed over the Great Lakes, it picked up moisture from the comparatively warm waters of the lakes, creating long cloud lines known as cloud streets. NASA satellites captured this view of clouds streets moving southeast across Lake Superior and east across the other lakes on November 18, 2014.

When clouds reached the edges of the lakes and crossed back over land, they cooled down even more. (Air is generally cooler over land than water, and also the clouds get pushed upward by the land surface.) Lower temperatures and increased altitude make it harder for clouds to retain moisture, so instead they drop it as snow. In this case, the west-southwesterly winds lined up perfectly with the long axis of Lake Erie, so the air was able to pick up an extraordinary amount of moisture. According to the National Weather Service, more than 60 inches (152 centimeters) of snow had fallen by November 18 and more was forecasted to fall.

Captured at the same moment as the natural-color image (top), the false-color image (bottom) was made by assigning blue light to show up as red, and two shortwave infrared bands to show up as green and blue. This band combination is useful for distinguishing between snow on the ground (dark pink), ice clouds (light pink), and water clouds (white). Bare ground is green.