It has been a while since I checked in with the Hubble telescope webpage http://hubblesite.org/newscenter/.  I brought my camera with me yesterday when I went cross country skiing with Lois Fite, but I forgot to put the newly recharged battery in the camera.  So for today's posting, we'll see what is new with Hubble.

The Hubble Space Telescope treats astronomers to gorgeous close-up views of the outer planets. In the photo below, the shadow of the Jovian moon Ganymede swept across the center of the Great Red Spot — a giant storm on the planet. This gave Jupiter the uncanny appearance of having a pupil in the center of a 10,000-mile-diameter "eye." 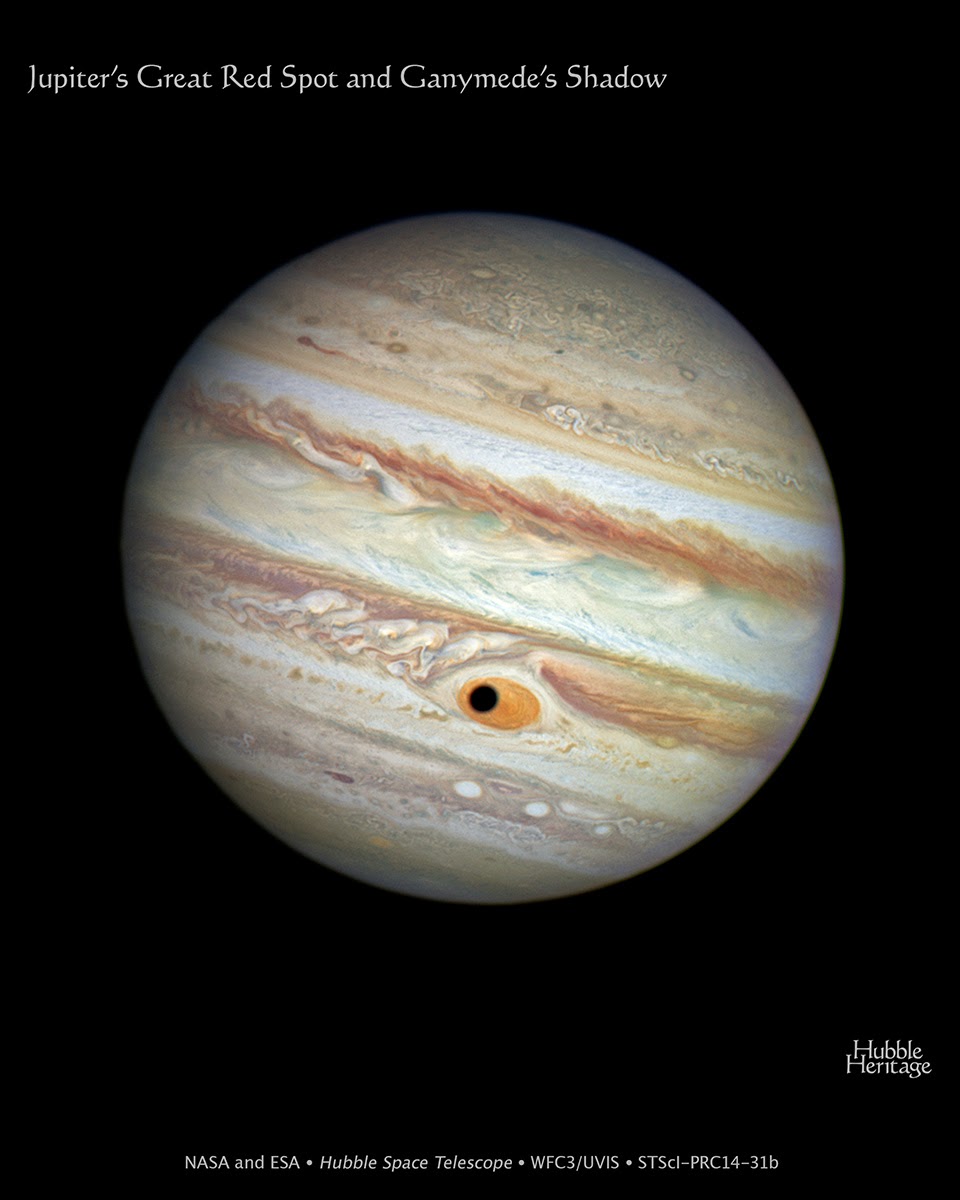 Jupiter's monster storm, the Great Red Spot, was once so large that three Earths would fit inside it. But new measurements by NASA's Hubble Space Telescope reveal that the largest storm in our solar system has downsized significantly. The red spot, which has been raging for at least a hundred years, is only the width of one Earth. What is happening? One possibility is that some unknown activity in the planet's atmosphere may be draining energy and weakening the storm, causing it to shrink. The Hubble images shown below were taken in 1995, 2009, and 2014. 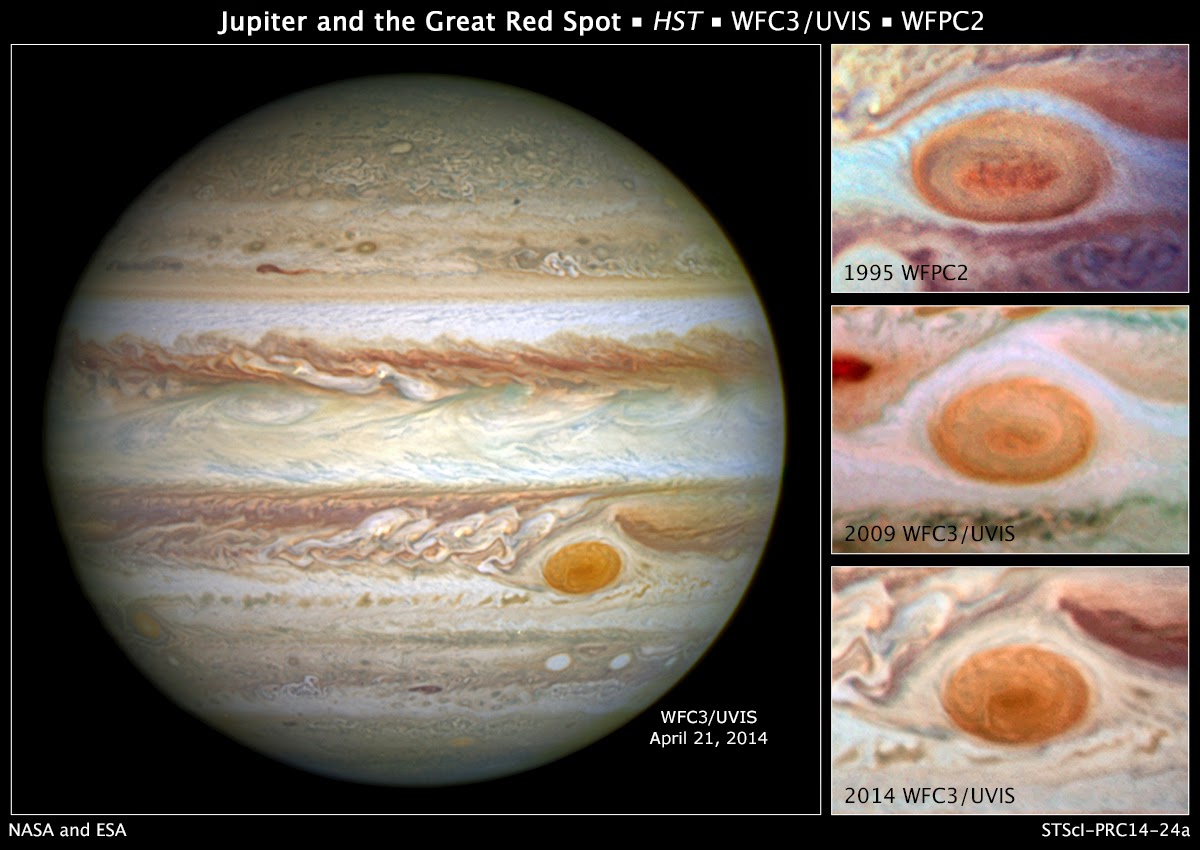 The photo below is a composite of the encounter of Comet Siding Spring with Mars on October 19, 2014. Separate Hubble Space Telescope images of Mars and the comet have been combined together into a single picture. This is a composite image because a single exposure of the stellar background, Comet Siding Spring, and Mars would be problematic because the objects are all moving with respect to each other and the background stars. Hubble can only track one planetary target at a time. Also, Mars is actually 10,000 times brighter than the comet, and the exposure here has been adjusted so that details on the Red Planet can be seen.  Also included are a couple of close ups of Mars and the comet. 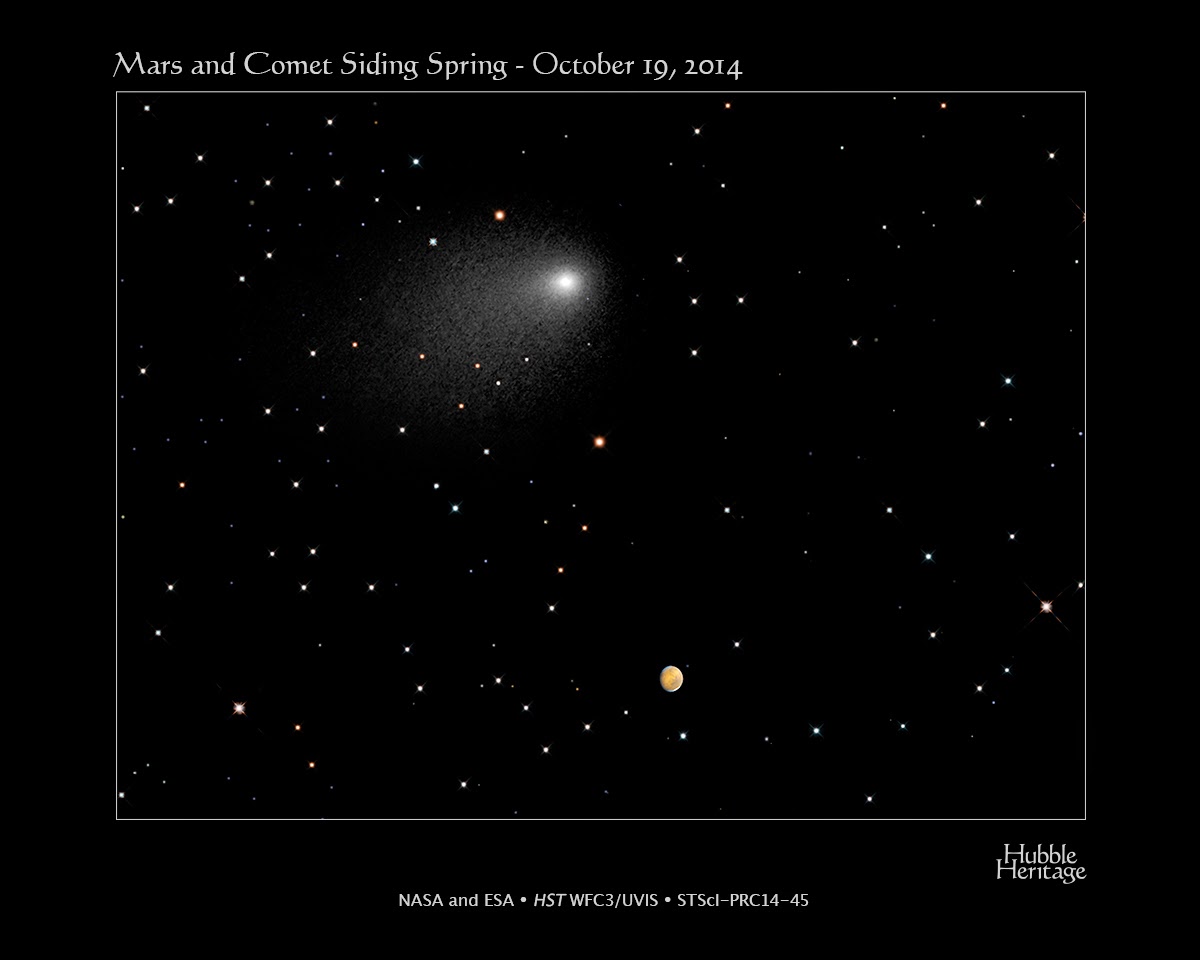 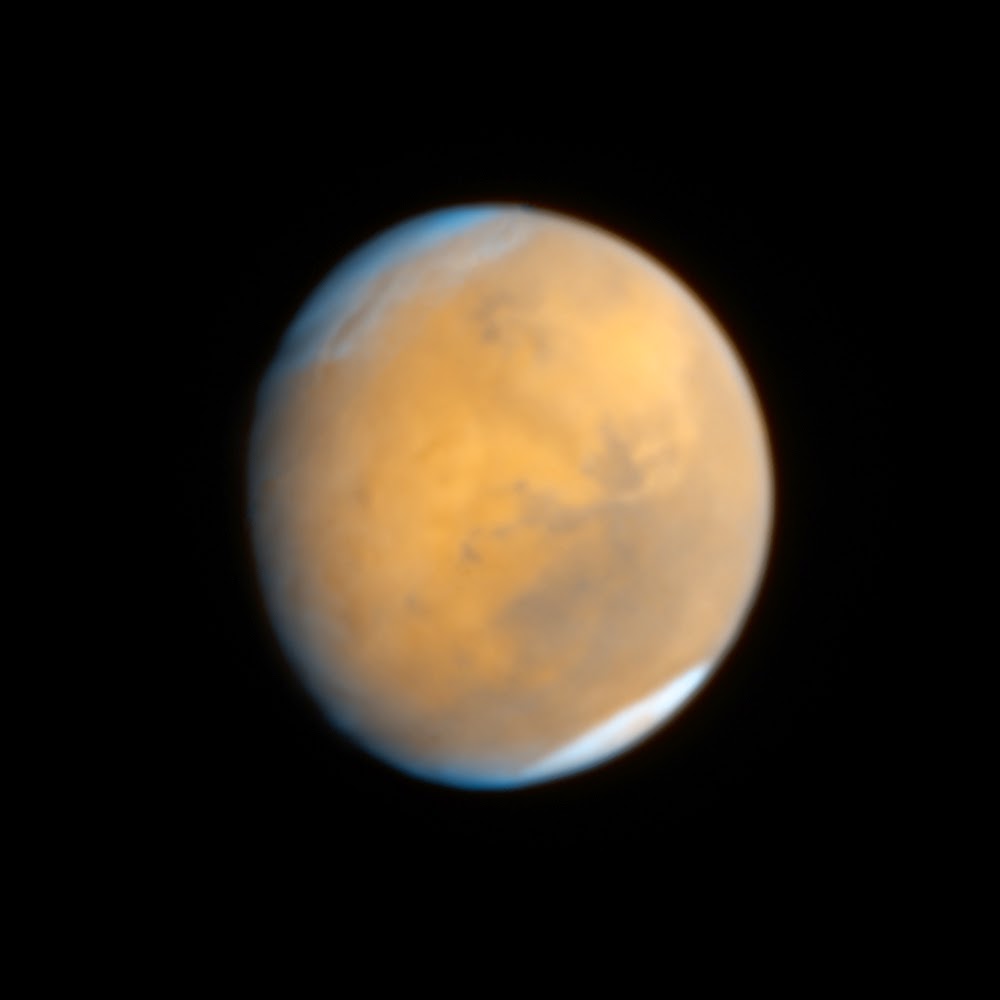 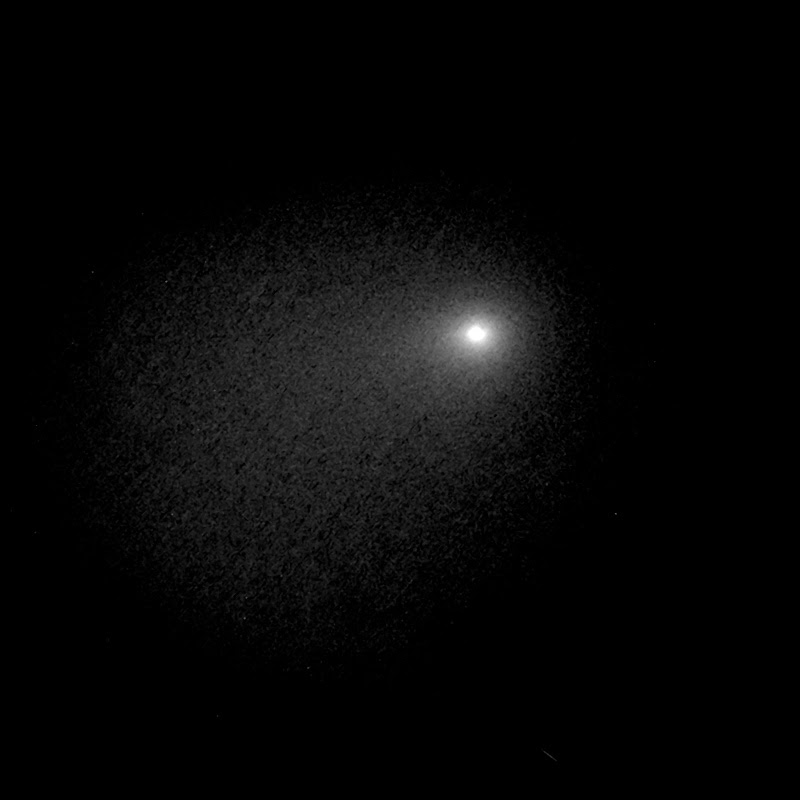 The universe is an infinite sea of galaxies, which are majestic star-cities. When galaxies group together in massive clusters, some of them can be ripped apart by the gravitational tug of other galaxies.  Astronomers using the Hubble Space Telescope to probe the massive galaxy cluster Abell 2744 — nicknamed Pandora's Cluster — have found forensic evidence of galaxies torn apart long ago. It's in the form of a phantom-like faint glow filling the space between the galaxies. This glow shown in the photo below comes from stars scattered into intergalactic space as a result of a galaxy's disintegration. 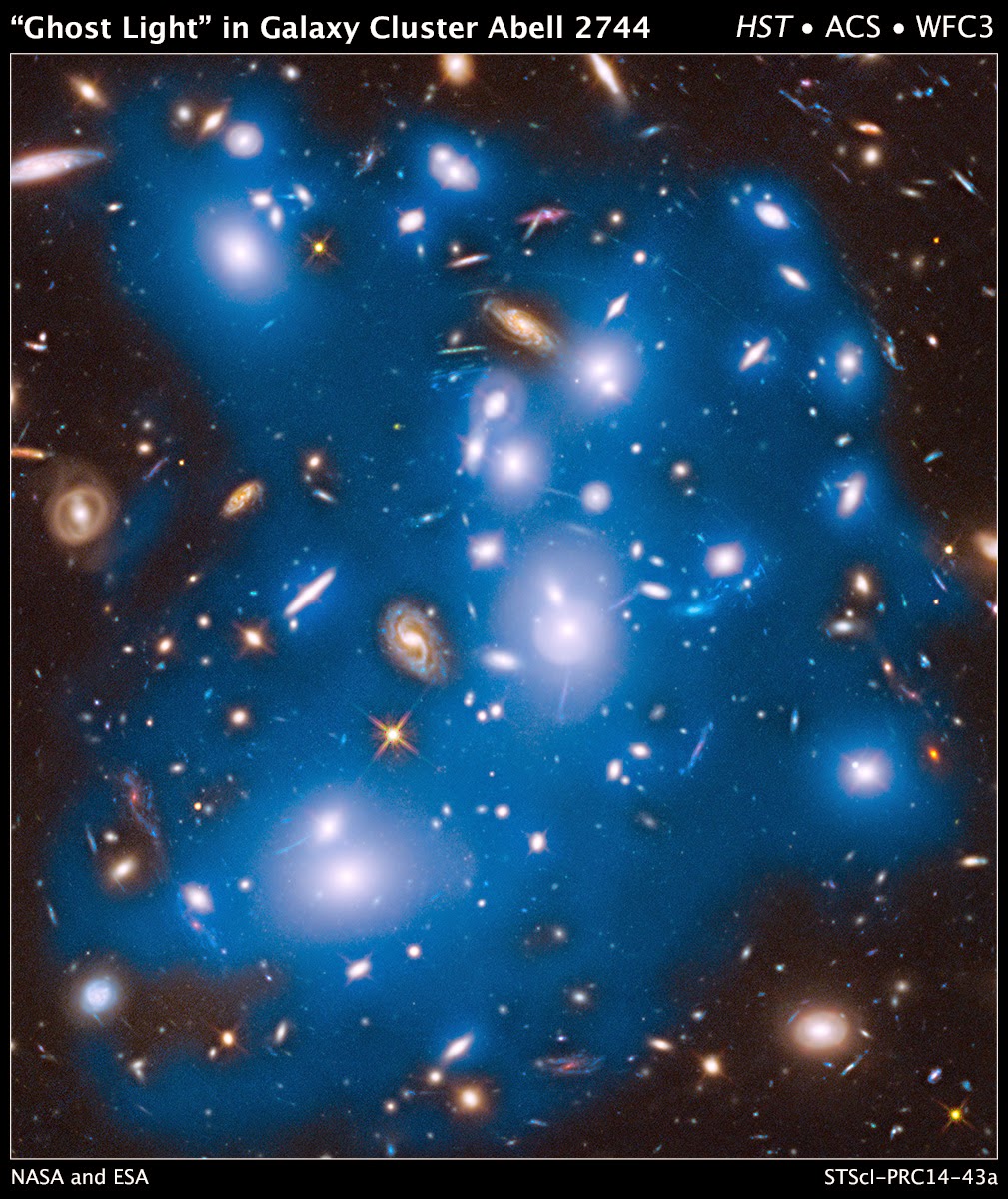 Astronomers using the Hubble Space Telescope have assembled the comprehensive picture shown below of the evolving universe — among the most colorful deep space images ever captured by the 24-year-old telescope. 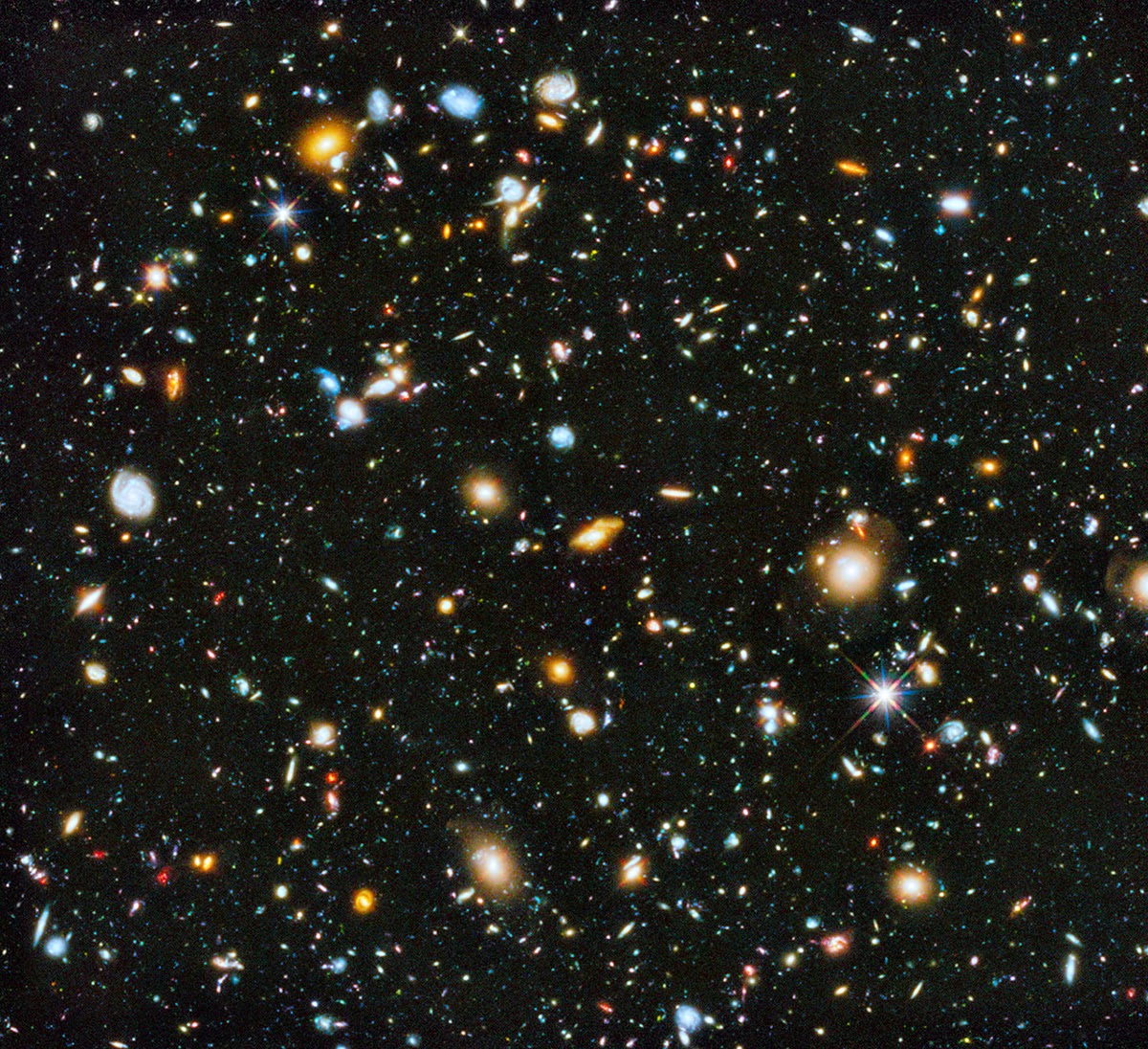 The colorful Hubble Space Telescope mosaic below shows a small portion of the Monkey Head Nebula unveiling a collection of carved knots of gas and dust silhouetted against glowing gas. The cloud is sculpted by ultraviolet light eating into the cool hydrogen gas. As the interstellar dust particles are warmed from the radiation from the stars in the center of the nebula, they heat up and begin to glow at infrared wavelengths, as captured by Hubble. 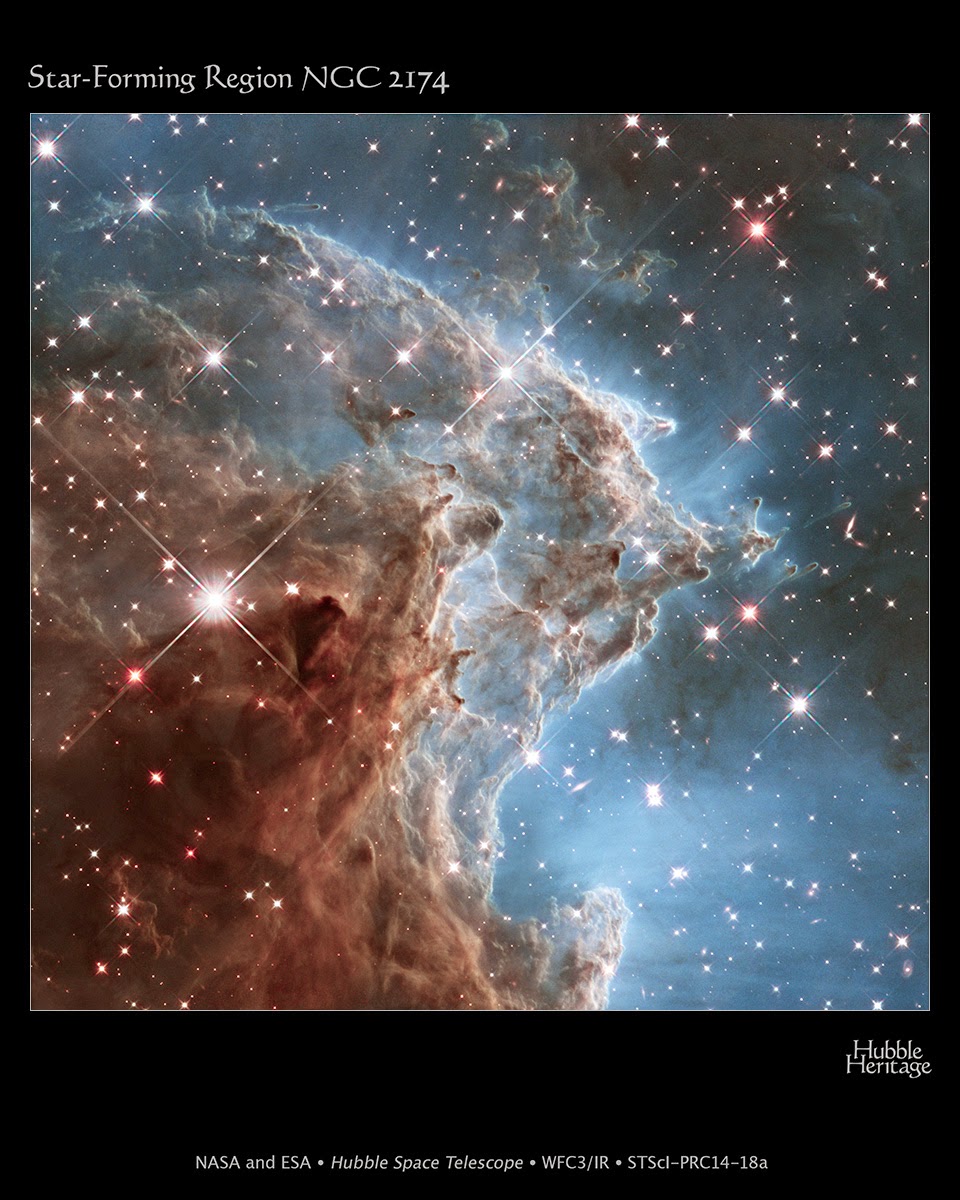